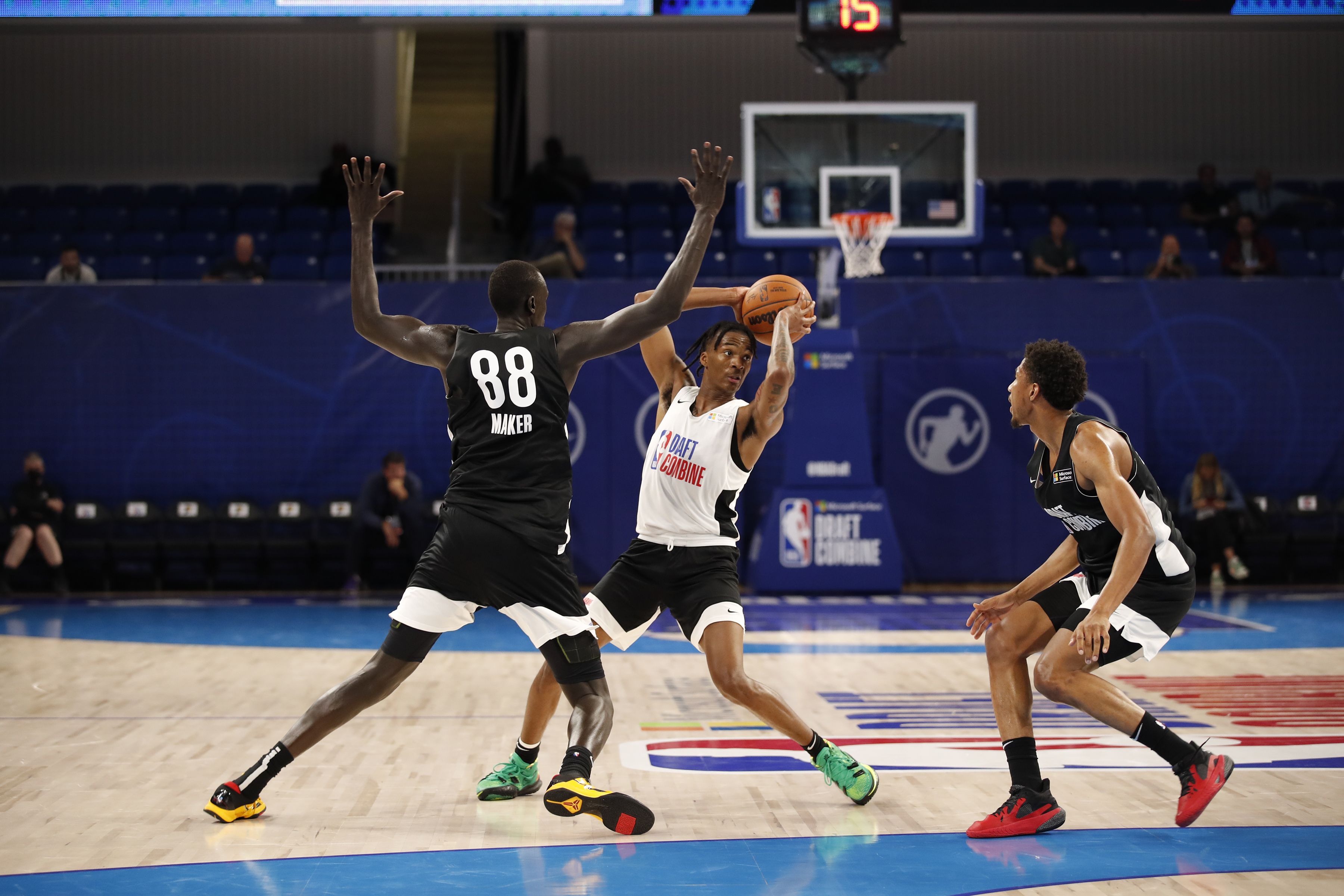 HOW PCP40 WAS BORN

B-Ball is behind the 8-ball and 20 years behind baseball when it comes to meaningful metrics.
Excited at the prospect of OKC’s three first round picks, I decided to create my first NBA draft big board. As a serious draftnik, I've been doing NFL big boards and metrics for more than a decade, but this was uncharted territory.
Tired of trawling through screeds of statistics, and dissatisfied with the current crop of metrics – such as PER,eFG%, TS%, Game Score, NBA Efficiency – I said "stuff it" and decided to create my own.

Metrics need data points – which is why baseball is so suited to stats - so I stripped the game back to basics. I examined every common stat and had deep thoughts about what they really actually mean.
Then one dark night, I had an epiphany in terms of how each one could and definitely should be expressed.
I realised I could create a quick and dirty version of baseball’s RC/27 (Runs Created per 27 innings) thus Points Created Per 40 was born.
HOW IT WORKS
Each and every common stat has been allocated a points value – mostly standard amongst metrics, apart from a few that I believe were overrated, underrated or just way-off wrong.

I painstakingly entered players every stat from their final season in college -big ups to Basketball Reference - into an Excel document, then applied the secret metric formula which gives us the pure PCP we all love and are addicted to...
So PCP40 captures everything and weighs it up – taking the points the player costs their team from the points they created. Thus the final RAW number represents the points that player contributed to HIS TEAM total over 40 minutes that they are on a COLLEGE court.
Unfortunately I found that G-League and Foreign stats can be unreliable - and also need converting from PER 36 - so those players literally come with an asterisk.
WHAT PCP40 DOES

1) It’s maths. It’s objective. It processes everything - everything readily available that is.
Every - good or bad - game. Every - good or bad -stat.
It doesn’t play favourites. It doesn’t support a school or coach or have an agenda. Importantly, it doesn’t rely on flashes, highlight reels or media hype...
2) It’s a tool that identifies overall college level efficiency and production. It pops up obscure sleepers that your scout should take a second -if not first - look at.
3) It also finds flaws on favourites that need further investigation - often pouring cold water on hot takes... So it can get you into arguments... Some of the strangest results are players who seem to fill the stat sheet properly, but score low because they are either inefficient in a lot of small ways or drift and don't impact the game enough.
4) Another benefit is it's great for finding valid statistical comparisons. Once enough player data is entered you will be able to make models to find the next SGA (Dosunmu?) or whomever...
WHAT PCP40 DOESN’T DO
1) It’s a snapshot of a player at the end of HIS college career.
Although age adjusted, it can’t predict actual real-life almost random growth of a youth.
2) It can’t measure what wasn’t there - such as a guy who never took 3s in college suddenly can in the NBA. Entering the data I found a lot of the famous stars didn’t shoot 3s until after college. Something to bear in mind when scouting.
3) It can’t predict what situation the player will land in. Where he will be in the pecking order, what role he’ll be put in and how much court time he’ll see. Generally the higher the pick invested the more patient a club will be with you.
Athleticism, length, smarts, defensive prowess etc. should show up in the stats somewhat. But the NBA is a step up and not every player can meet the physical challenge.
4) The metric doesn’t discriminate, so a lot of the top scorers are (short or slow or old) PGs, who are unfashionable because they don’t have ‘upside’ or can’t guard the 2 or 3 so we can play the beautiful position-less game... Or worse they’re big clunky centers who can only rebound, block and score at 60%, but can’t defend the perimeter.
Other players are excellent at everything but have a glaring hole in their game. You can actually see it on the sheet, like a bleeding wound because the columns are colour-banded...
5) Also, because college is competitive & the metric is a balance of skills and flaws, the majority of results are middling, clustered around the mean (approx 16-19pts) and difficult to differentiate. Thus, the scout’s job is to see if the positives are in the right place, the negative are negligible and the potential for growth is there.
Players still need to be scouted, PCP40 just is an objective tool.
WHAT PJP40 DOES
Projection Per 40 is an extension of the pure PCP40. The filters normalise the player similar to how you multiply the denominators together to add or subtract fractions. The filters applied are age, experience, strength of schedule, team possessions (pace), and finally usage.
It sort of makes them all twins. Think a 22-year-old with 3 years experience, playing a .500 SOS, with 71.3 (NCAA average for last season) team possessions and a 30% usage (admittedly high, however these are supposedly the best of the best in college basketball - plus it's different usage interpretation). Once they're all the same person you can see who posted the best stats.
WHAT PJP40 DOESN"T (CURRENTLY) DO
Evaluating foreigners and G League players is tricky. The team possessions I managed to figure out, but the SOS.
Either the G League is very difficult or the four highly-touted Ignite players are damp squibs.
SCOUTING TIPS THE PROCESS TAUGHT ME
The ‘market’ doesn’t value centers, or PGs who are small, slow or old... And it should. Chris Paul - who took his team to the NBA finals - is all those things. And always has been...
The historically successful PGs that I entered into the metric, almost always played 3 or 4 years at college honing their craft. And a lot were short. One of the reasons they're undervalued is the very real points created by a pass-first PG are put on the scoreboard by other players, thereby improving their stats. You only have to look back to last year's Thunder under CP3 to see that...
This is one of the many differences between FIBA and NBA styles. I'm currently cataloguing all of them to make an overseas conversion metric...
The 3-point shot can be developed. The rule of thumb is to look at free throw percentage, however some bigs struggle with frees, yet can still shoot threes (huge hands theory). So, scout players who do everything else well and take a long hard look at their three to see if you can develop it.
Players from Kentucky, especially bigs, often out-perform their stats at the NBA level. I figure it is because they're mostly one-and-dones and don't find their feet until the tournament.
CONCLUSION
The metric is maths in action. I trust maths more than I trust ESPN ‘analysts’. Data is objective; opinions are subjective. I believe in my raw metric because, with my new mindset, I believe I got the stat values right.
Also everyone seems to be out to buy a lottery ticket for the big prize. Most players in the NBA aren’t stars or even starters. I’d rather have a bench loaded with smart efficient role-players, who may grow even better, than a bunch of projects, who can only grow better... You give them enough game time to get good, then they sign with someone else...
Hope is not a strategy. Your team only needs 2 or 3 stars. Once you have them pick efficiency, generate team synergy and compete.
So, with 132 entries for this year’s draft, 630 overall, I’ve made some tiers.
25+ = lottery consideration
19-24 = first round consideration
17-19 = 2nd round consideration

Here is a list of a lot of recent draft steals and undrafted (61) gems alongside my raw metric evaluation of them.
A good player is an efficient player and that's what PCP40 identifies... Such as our own undrafted gem Kenny Hustle 23.9... Also proves we should have not traded Brandon Clarke for Bambi on Ice.... And kept Alex Caruso...And Sabonis...