As I write this, the theme song from ‘Friends’ is playing in the background on the television. "I’ll be there for you! When the rain starts to pour. I’ll be there for you! Like I’ve been there before." That television show has quickly become one of my favorite Netflix binges. I know, I know, I’m a little late in the game but at least I’m there, unlike Paul George when it matters most.

As a disclaimer, I will admit how biased I am towards this subject. My father is from Indianapolis, so I really love George as he is a former Indiana Pacer. His game is silky smooth, and I was really excited to see this guy play along Russell Westbrook and Carmelo Anthony with the Oklahoma City Thunder.

But enough of the pleasantries.

It is becoming quite pellucid that George is not the man who can lead a franchise to the promised land, and now I am beginning to doubt that he can do so as a secondary piece alongside Westbrook.

I know what some of you are thinking, I’ll say it for you, "but he’s averaging 21.8 points! He’s playing alongside Westbrook so you know he can’t get buckets like before!"

Remember when the almighty Golden State Warriors played the Thunder on February 24th? I do. It was supposed to be a good night. I had wings. Lemon Pepper to be precise. I also had a celebratory margarita, because I was of the sentient that the Thunder were about to have a 3-0 season lead over the Warriors, and it was a night worth celebrating.

And then came Paul George.

His abysmal performance led to the demise of the Oklahoma City Thunder. George contributed five points to what was easily one of the biggest games of the year. His shot simply was not falling, and it was implausible to me that this would happen on this particular night.

Silly me, thinking that this would be a transient issue, but by George it happened again!

The Thunder visited the Portland Trailblazers, another great playoff team, about a week later and George went 0-7 from the three-point line in a game that resulted in a Thunder loss.

Days after that, the Thunder lost to the number one seed Houston Rockets, with a score that wasn’t nearly as close as it appears: 122-112. George scored a paltry 17 points, 25 % from the three-point line with a negative plus minus on the floor.

For those of you who don’t know, those three teams mentioned are above the Thunder in the NBA Western conference standings, and it’s becoming more cogent why. It doesn’t take a detective to recognize the culprit is Mr. George. He doesn’t have the greatest history of coming in the clutch when it matters. Prior to the 2017 eastern conference playoff match against the Cleveland Cavaliers, George was 0-15 in his career on potential go-ahead (clutch) shots in the final 20 seconds, making him the worst player in that category since 2010 per ESPN Stats and Info.

Not much has improved since.

Perhaps, we need to pause and examine these unassailable facts before granting George with the free-agency hype deserved by someone of true superstar magnitude, like Lebron James, Kevin Durant, Stephen Curry, or his current teammate, Russell Westbrook. The Thunder ceiling for augmented success is closely correlated with the clutch performance of George when the stakes are greatest. Yes. It is Westbrook's team, but the Thunder will go as far as George will take them.

I can hear what episode of Friends is on, and it’s "The One with Unagi". You know, the one where Ross tries to teach Rachel and Phoebe an intangible karate concept, called "unagi", which is an existential awareness of their surroundings. Maybe PG (Paul George) should contact Ross and learn how to tap into his "unagi" during games, because he’s clearly not aware of when his skill is needed most. Again, I love PG. He’s probably one of my top-five favorite players in the league, but he’s simply not "the one you can count on."

And history shows that come playoff time, he won’t be there for you. 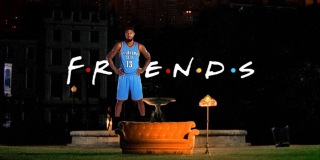 Can you rely on Paul George?