Tom Thibodeau was let go from Chicago. What might happen if the Thunder offered him a short term deal as assistant to Billy Donovan and just focus on defense?

Share All sharing options for: The Thunder should make a move and contact Tom Thibodeau as defensive assistant coach in Oklahoma City

Chicago fans and everyone else knew the event was coming, and it did. The Chicago Bulls have fired Tom Thibodeau.

The Bulls Announced Thibodeau's firing in the meanest way possible.

"The Chicago Bulls have a history of achieving great success on and off the court. These accomplishments have been possible because of an organizational culture where input from all parts of the organization has been welcomed and valued, there has been a willingness to participate in a free flow of information, and there have been clear and consistent goals.

While the head of each department of the organization must be free to make final decisions regarding his department, there must be free and open interdepartmental discussion and consideration of everyone's ideas and opinions. These internal discussions must not be considered an invasion of turf, and must remain private.

Teams that consistently perform at the highest levels are able to come together and be unified across the organization-staff, players, coaches, management and ownership. When everyone is on the same page, trust develops and teams can grow and succeed together.

Unfortunately, there has been a departure from this culture.

To ensure that the Chicago Bulls can continue to grow and succeed, we have decided that a change in the head coaching position is required.

If reports are accurate, it gets worse. After "thanking" Thibodeau, Reinsdorf said he "respected his love of the game," and then security was charged to escort the former Bulls coach from the United Center just as soon as he packed his things.

Holy Smokes Batman! Not much love for a guy with the 6th highest winning percentage of qualifying coaches in NBA history.

The declining relationship between Thibs and the Bulls front office is well documented, but this feels more like a public assassination rather than a change in direction.

Reinsdorf firing Thibs was not a coup d'etat. To prepare Bulls fans for the inevitable, the path to this firing has been paved for months and maybe even years. The rift between management and coach may have started when the Bulls did not retain Ron Adams after the 2013 season. It was an inexplicable front office move that supposedly did not sit well with Thibodeau and served as a glaring red flag that Bulls management was more than willing to trespass into what is normally deemed head coaching territory.

So where exactly does all this leave Tom Thibodeau? I mean, other than $9 million richer over the next two years and finding his summer calendar suddenly clear?

Obviously his name will pop up in all the usual places with current NBA head coaching jobs available. Orlando, Denver, and New Orleans need head coaches right away. Even teams that already have coaches might be willing to jettison them in order to grab Thibs.  In researching this post I saw an article declaring the Lakers should fire Byron Scott and pursue Thibodeau.

The problem with the rumor mill is that it is generally focused on what fans and media types want to happen. The real question is, what does Tom Thibodeau want right now? 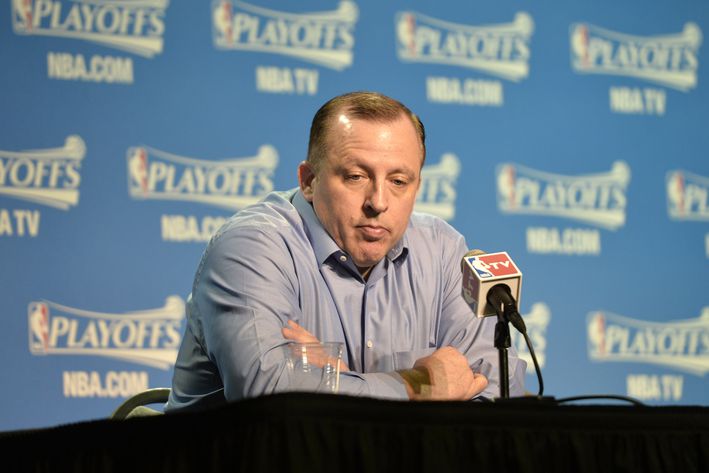 Welcome to the weird world of the Chicago Bulls, where the front office only knows how to do business in ways that make everyone involved feel uncomfortable and offended. Follow this franchise long enough and you realize it's par for the course.

His dismissal doesn't carry the same financial ramifications as is does for the average working stiff that has to get right back out there, or else. His contract gives him two years to work with although the Bulls did his reputation no favors leading up this firing. Former Thunder head coach Scott Brooks has decided to take the year left on his contract to reconnect with family and look into other options. Tom Thibodeau may very well do something similar.

When Brooks was dismissed, he left OKC wearing a white hat, ego bruised, but reputation intact. Thibs was fired, publicly scorned, and then escorted out of the United Center by security. Definitely not the strongest position to be working from when entering negotiations for a new head coaching job.

After what can be assumed was a stressful 24 months since the Adams dismissal, could there be a possibility that Thibodeau doesn't want to step back into the head coaching fire immediately? Possibly for multiple reasons?

Denver has an opening, but they fired George Karl in 2013 after leading a team with no All-Stars to the 3rd seed and league-best home record in the brutally competitive Western Conference.

Orlando has an opening and plenty of young talent with which to work, but they have long had difficulty keeping top talent in town.

New Orleans has an opening, but they fired Monty Williams after getting the team to the playoffs for the first time in 4 years. That wouldn't be too bad unless you consider this:

Ownership gave GM Dell Demps and Monty Williams preseason mandate to make playoffs to keep jobs, w/ no allowance for injuries. They made it.

After dealing with Reinsdorf and his league of media assassins, Thibs may be looking for something a bit more stable and a lot less stressful. Now might be a good time to step back, regain some momentum, and let the media storm surrounding his firing subside. A good time to remind the powers that be what he is capable of and why he was hired in Chicago in the first place.
Tom Thibodeau was an NBA Championship assistant coach with the Boston Celtics in 2008, building one of the most ferocious defenses in NBA history in the process.  Could that be an option?
Other former head coaches have taken a position as an assistant after being fired, usually because they had no choice, and came back as better head coaches later in their careers. Warriors assistant coach Alvin Gentry come to mind, and he too is being mentioned for possible coaching vacancies. To be sure, Thibs will have his choice of teams that will likely court him. However, are those situations the right fit for a coachaholic like Thibodeau, whose entire life is engrossed in the coaching profession? Knowing what he knows now, finding the right situation is more important than anything. So why take just any old head coaching job?
If he wants it, there is probably an NBA TV analyst job waiting with Thibodeau's name on it, paying good money for a small amount of work. But can anyone see him being happy in that role where he is not actively involved in the daily grind of making teams better? By contrast, If the current head coaching job openings aren't enticing, perhaps stepping back into an assistant role for a short while appeals to Thibs. As we know, there is a team in dire need of his kind of defensive expertise and experience. The Oklahoma City Thunder.
That option may not be as crazy as one might think.
Bring in Thibodeau, and the Thunder would have a proven NBA defensive guru taking on a ready-to-win-now team that has clear coaching shortcomings, especially on the defensive end. Take the job and successfully get the Thunder's defense on track, and Thibodeau shakes the taskmaster label and regains the coaching genius status he had in Boston. Golden State has proven what you can do when you surround a bright but rookie head coach (Steve Kerr) with some of the best assistants in the NBA in Alvin Gentry and Ron Adams. All they did in less than a year was create an exciting Finals-bound team that is best in offensive efficiency, best in defensive efficiency, and owns a historically great point differential of over 10 points per game. That is clearly a model for other teams to follow.
For Thibs, with a coaching resume that contains deep playoff runs, a clear and identifiable elite coaching skill (defense), and a championship ring(s?), he would be able to rehabilitate whatever residual tarnish might be on his reputation and in the near future look for the job of his choosing. He's already set to make $9 million over the next two years to do nothing; why not have Presti offer a sweetheart 2-year deal with the second year an option, so if the situation turns, he's free to resume his head coaching career?
Additionally, the Thunder's new head coach Billy Donovan would get to pick Thibodeau's NBA brain for a while, and Thibs would get to keep doing what he loves to do without the pressure that goes with the head coaching mantle. Not to mention a heck of PR boost and banking more coin than the $750,000 top TV analysts generally make.
With rumors floating around that Jeff Van Gundy has been approached about the Pelican's job, Thibodeau may rejoin his old boss if he decides to go the assistant route. But before he does, he might want to ask himself what might happen if the Donovan hire goes south on Presti. Donovan's predecessor got the job when he was promoted from the assistant spot when PJ Carlesimo didn't cut the mustard in 2008. The downside of course is that it challenges Donovan's authority. Would Thibs' presence on the bench hurt or help?
Right time, right place?
Probably not, but the thought is intriguing.

Sounds of Thunder: the OKC musings of R.K. Anthony