Scott Brooks: "Yeah, I expect to be the coach next season"

Scotty gets a chance to plead his case to the public in Thunder exit interviews on Thursday.

Share All sharing options for: Scott Brooks: "Yeah, I expect to be the coach next season"

Scott Brooks was given a chance to defend his status as the coach of the Oklahoma City Thunder when he gave his exit interview on Wednesday. Here's how it went down....

Reporter: "You're entering the last year guaranteed of your deal. Do you feel secure in your future here, moving forward?"

I'm excited about the talent we have here. During this season, Sam [Presti] added a lot of players. Players that are going to get better. That's another area that ... it's disappointing that we did not make the playoffs. Playoffs is another level. Being in the playoffs in Oklahoma City is even another level than most cities, just because of the excitement and the crowd. But the pressure of the games.... we haven't had a lot of guys who've experienced that. During the last month of the season, out of the top rotation guys, Nick and Russ are the only guys that really have a lot of playoff experience. So it would've been great if those other guys would've had a chance to compete against Golden State. Obviously we would've been the underdog, but we were excited about that opportunity. But it didn't happen.

Reporter: "That said, would you maybe want to re-work your deal so it's not one final season?"

Brooks: "Nope. You never, as a player.... When you sign a deal, you sign a deal. As a coach, I'm the same way. I will honor.... It's always about doing your job, and doing the best of your abilities.

I am confident enough that what we've done here over the last 7 years is special. It doesn't happen a lot. We've done a lot of things that have put us in that position. We've had some unfortunate bad fortune going back to three years ago. So you never really know what this team can really be until it can stay healthy throughout the season. Most importantly, this part of the season. " 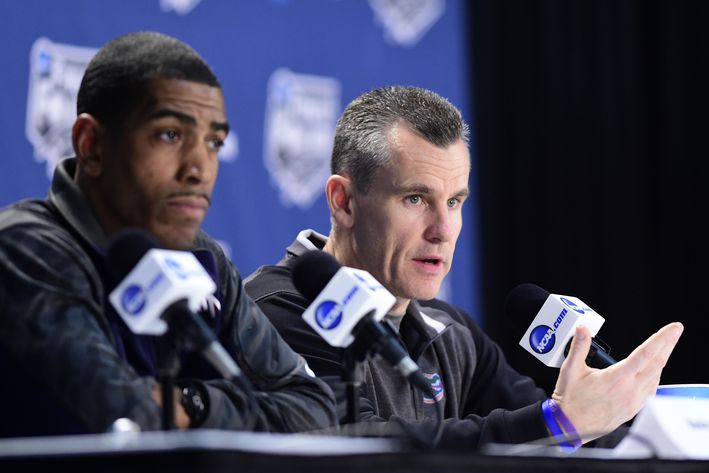 This speculation was caused by none other than Adrian Wojnarowski, who reported that the Thunder would be evaluating their relationship with Scott Brooks before bringing him back for the final year of his contract.

Brooks definitely knows how to diffuse controversy and criticism. His ability to handle this situation so calmly adds to that mystique. His case for remaining as head coach appears to be strong, with the players firmly behind him and a reasonable excuse for every regular season result. The pressure to succeed next year will undoubtedly be enormous, probably moreso than any year prior. But if this exit interview is any indication, Brooks has at least another year to chase that elusive title.

Do you think Scott Brooks has a future in OKC? Do you buy his reasoning? Drop a comment and let us know!