Thunder vs Raptors Preview: Can the Durant-less Thunder Finally Beat a Good Team?

With some improvement on defense and role players stepping up, OKC should beat Toronto. But will they?

Share All sharing options for: Thunder vs Raptors Preview: Can the Durant-less Thunder Finally Beat a Good Team?

Where They At: Thunder

The Thunder have been winning at better than a .700 clip for a while, with an average net rating of 8.1 over their last 15 games. For a team that has had the reigning MVP max out at 12 consecutive appearance this season, they are in an objectively good stretch. Subjectively, it hasn't felt that great—the euphoria generated by Russell Westbrook's metamorphosis notwithstanding. The nature of the wins and losses—easy opponents, coming up just short despite herculean efforts from Westbrook, respectively—takes the shine off a bit. I do think this kind of run was OKC's best case scenario as the season opened without Durant, but when Russ got wiped out and the team started 3-12, the rest of the season's disappointments were doomed to be perceived as failures.

Perimeter D has been an ongoing problem for OKC, and it bit them bad against the Bulls. It sounds like Steven Adams will play, and his defense will be welcome, as cinderblock-footed Enes Kanter has been doing his best to convince Thunder fans that Kendrick Perkins did have some value, after all. While better containment of the pick and roll with Adams will help in whatever minutes he plays, the team’s help and recovery has been the bigger culprit than any one guy; Serge Ibaka and Westbrook were the defenders responsible for the backbreaker three from E’Twaun Moore.

The Thunder are still desperate for wins, as they hang on at the 8 seed and tally notches on their Ishango Bone until Kevin Durant comes back. The Pelicans have their own alien in Anthony Davis keeping them in the race, and the Suns won’t die, either. OKC needs a win.

Where They At: Raptors

While Toronto would be fighting for the seventh seed in the Western Conference, they’re sitting pretty in the 4-spot in the East. They’ve been struggling, losing 6 of 7, as nagging injuries have caused Kyle Lowry’s scoring to plummet after the All-Star Break. He took three games off and bounced back in Friday’s loss to the Hornets for 25 points. The Raptors stood pat at the trade deadline, going with the horse they rode in on despite Jonas Valanciunas coming short of convincing anyone that he’s ready to excel in high-stakes situations (some nights, Dwayne Casey doesn’t trust Jonas enough to finish close games on the court). 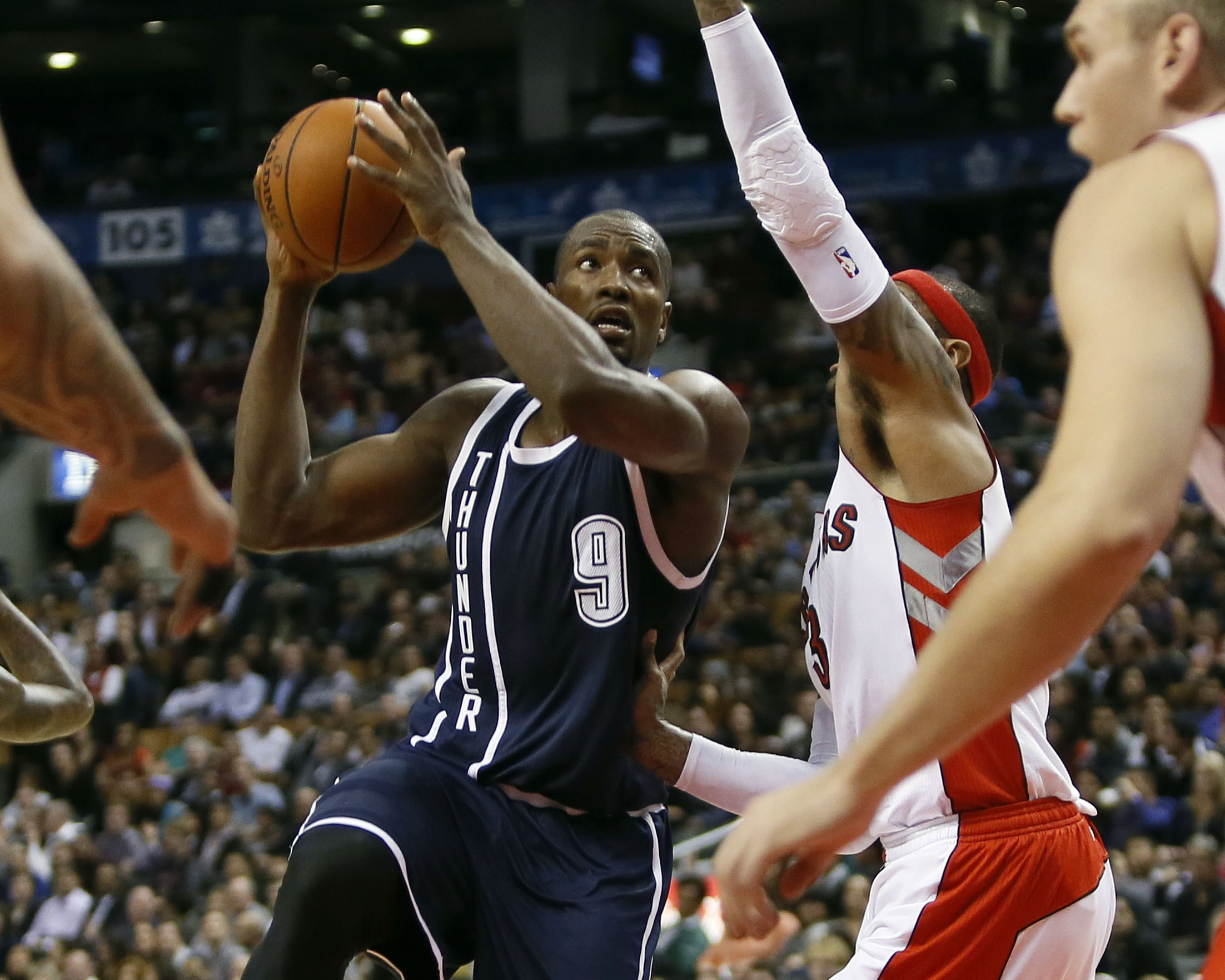 We ask RaptorsHQ some questions about how their season has unfolded.

Toronto need to win to start digging out of their slump and reclaim the second or third seed, but they aren’t in great danger of falling further in the seeding. The Wizards are 3.5 games back, and Washington has been free falling at a greater rate than Toronto.

So yeah, the Thunder lost another tough one in Chicago, but is there reason to believe they can string together four good quarters at home versus the Raptors? Russ shows no signs of slowing, but Kyle Lowry is a much better defender than most of the foes Westbrook has been brutalizing of late (Isaiah Canaan, Damian Lillard, Aaron Brooks are not exactly a gauntlet).

The Raptors are middle of the pack in three-point percentage (34.7%), but they take the 10th most in the league. Scott Brooks will need to find the right balance of offense and defense between Andre Roberson, Dion Waiters, and Anthony Morrow at shooting guard, something I’m not sure he has his thumb on at the moment. Dion’s mix of (hypothetical) offense and (actual) defense is getting him sixth man minutes, whereas Roberson is starting because Brooks likes to set the table with defense. Thing is, when Dion is bricking and the team is hemorrhaging threes, shouldn’t Roberson or Morrow get the call more often?

The biggest reason for optimism outside of Westbrook is that this game will be played at home, where the Thunder role players should get a spike in production. Still ,the Thunder just haven’t been able to hold off good teams when KD is on the sidelines. I fully expect another round of Monster Westbrook, but I’m bracing for another gut punch in the final possessions.