Share All sharing options for: Thunder vs. Timberwolves, final score: Russell Westbrook gets eighth triple double as he propels Oklahoma City atop Minnesota, 113-99

How Westbrook won the game

With 7:31 to go in the fourth quarter, the Oklahoma City Thunder were up by seven. It had been a ho-hum game between a couple of young teams. The T-Wolves showcased some great ball movement, fundamental play, and ability to get to the line. The Thunder had bullied their way to dominance in the paint, and were doing a good job of using that spacing for some key threes early in the fourth. But OKC's bench offense was a bit perimeter-oriented, and the hard-working T-Wolves kept pace.

Then, Russell Westbrook came in. Over the next 5:18, Westbrook would shoot 5-7 from the field, 3-3 from the free throw line, and finish with 15 total points. Russ even found times to grab three offensive boards, dish two assists, and steal it once. There were no ifs, ands, or buts about it: Russell Westbrook took over this game. Russ ran the pick and roll to perfection all night long, but some of his plays in the fourth were characterized by good patience in the half-court. Three of Russell's five field goals came via an assist, which shows you what kind of mindset he was in tonight.

Westbrook's game overall wasn't flawless. Eight turnovers loom over Russ's final statline. The mistakes are completely forgivable, though. Westbrook was just trying to force the ball against one of the worst interior Ds in the league. Some of the easy baskets he was able to get just by gambling on risky passes to OKC's stronger bigs were well worth it. Furthermore, his spacing was what created shots for the Thunder all night long, aside from a brief stint of success with Kanter in the third. 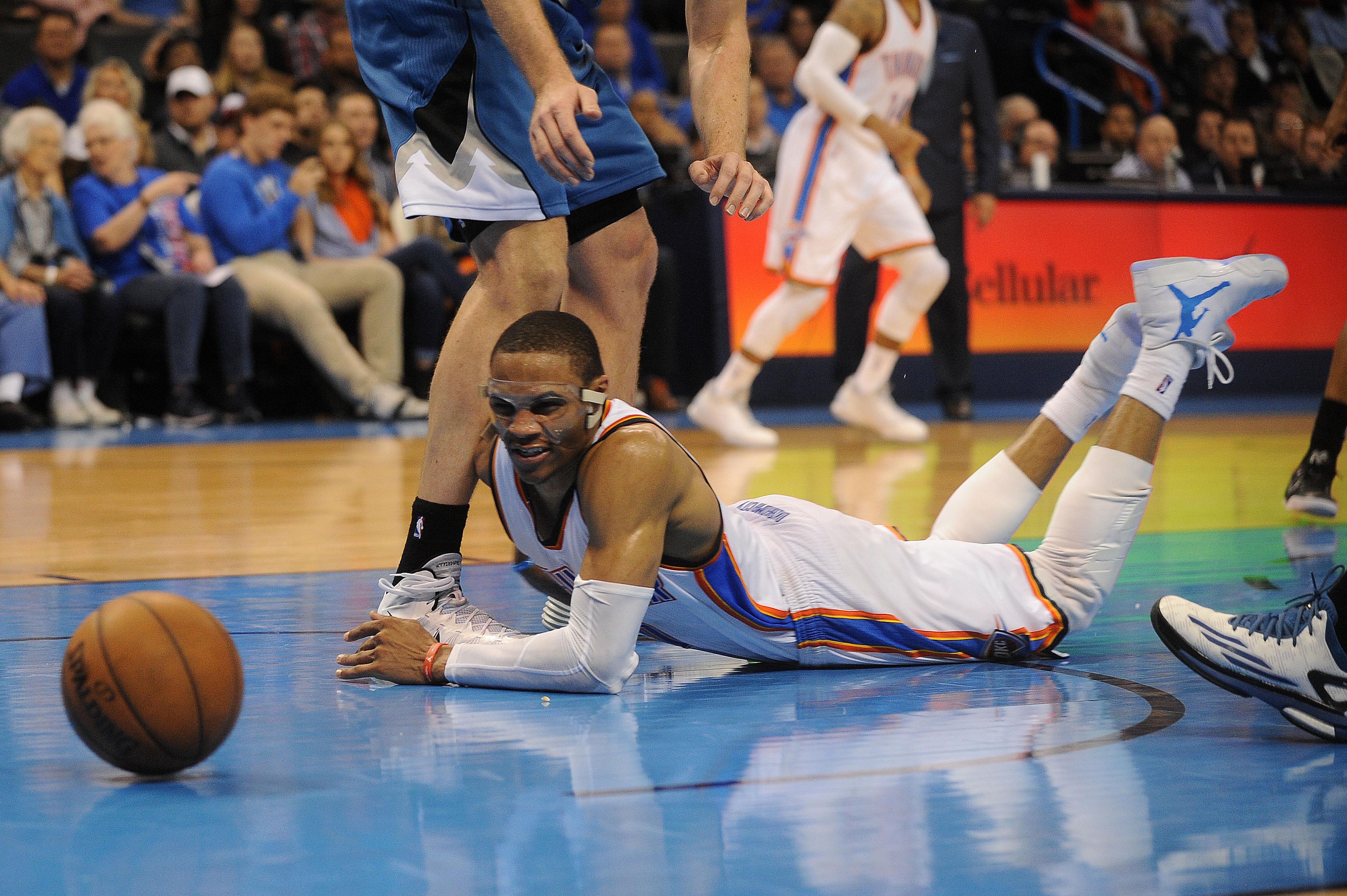 The Thunder move into a tie with the Pelicans, but there is a long road ahead.

By the way, Westbrook's final line was a triple double. Sixth in his last eight games. As Thunder fans, we have only the highest standards, so this is par for the course. What I really noticed about tonight though was Russ's ability to hit the deep three with such ease. I actually get excited when Westbrook spots up from ultra long range now, and I used to cringe! Also, don't forget about Russ' evolving use of the glass on his mid-range jumpers. Love to see Westbrook using as many old school big man tools as possible to elevate his game, especially considering his size for his position.

Lineups all over the place

With Serge Ibaka out tonight with right knee soreness, Mitch McGary got a crack at the starting lineup. Brooks made a further tweak though, dropping Kyle Singler for Dion Waiters. This had the effect of adding more offense to the starting lineup, as well as an additional ballhandler. Singler never really puts the ball on the floor, despite good shooting ability.

Throughout the game, Coach Brooks made a ton of further adjustments. The biggest change was Kanter and Adams playing together for large stretches of the second and third quarters. That arrangement worked out well for a while, as OKC basically godzillaed all of the offensive boards. But Minnesota quickly grew wise and used their speed to exploit the Kanter/Adams combo. Brooks quickly withdrew, but the Thunder probably came out for the better. This is the second straight game we've seen Brooks use both centers together after never using the tactic previously.

I'm only scratching the surface though. Steve Novak got his first regular time, and hit two completely meaningless threes. One came after Novak stepped out of bounds, and the other came in garbage time. Nick Collison had the cobwebs dusted off on him as well, after being forgotten about in the second half of the Clipper game. Despite a quiet game overall, Collison would actually come up big on defense in the clutch. Nick got a key steal on a pick and roll late in the third that led to a Westbrook layup, and blocked a Justin Hamilton shot in the early fourth. Both of these came when OKC was trading baskets with Minnesota offensively, so for Collison to win two possessions was big.

At the end of the day, it's pretty obvious that Brooks was experimenting against a bad team. More power to him, I say.

Minnesota uses half-court offense, foul game to stay in it

The Timberwolves don't have a lot of shooters other than Kevin Martin. If he doesn't establish things from range, the Wolves aren't going to be a serious threat from beyond the arc. K-Mart was 1-5 tonight, with some painfully open misses that reminded me of his days in OKC. Still, the T-Wolves managed to survive through alternate forms of offense for three entire quarters.

The first quarter was a bad one for the T-Wolves from the floor, but a 10/10 performance from Andrew Wiggins at the line kept Minnesota in the game. Wiggins took advantage of OKC's lack of a stopper at his position. The second quarter saw the Wolves use a lot of half-court offense. Rubio and K-Mart worked within that scheme and managed to find a ton of room coming via off-ball screens. Gorgui Dieng threw in his help too, constantly lurking near the rim for tenacious points. The third quarter was all about Justin Hamilton, the former Heat towel-waiver. Hamilton worked the pick and roll with Zach LaVine quite well, despite it looking much less impressive than anything OKC did.

In the fourth, Minnesota actually scored relatively well. The LaVine-Hamilton combo continued to form the basis for the T-Wolf offense. But Minnesota had no answer for Russell, and the T-Wolves didn't take a single non-garbage time three in the fourth.

Thunder Blunder: Dion Waiters, 25% from the floor and 1 assist despite improved shot selection

What did you think of tonight's game? Drop a comment and let us know!