Andre Roberson is being encouraged to shoot. Is this a good thing?

Andre Roberson is the starting shooting guard for the Oklahoma City Thunder, a team that has championship aspirations. There are many who reasonably conclude that these two facts are incompatible. Roberson has a reputation, justly or not, as the worst offensive starter in the NBA. His opposing player assigned to him essentially is given a free pass to fully commit on drives by other Thunder players.

Here is where things get interesting. Since January 18th, Andre has hit 9 of 16 threes. He just scored 12 points on 5-6 shooting against the Nuggets, including 2-3 from 3-point range. This is the same player that shot a terrible 1 of 15 from 3-point range in November, and 5 of 33 by the time 2014 ended. What is going on?

As Brian Davis loves to tell us every time a Roberson prayer goes in, the Thunder coaching staff have been working with Andre on his shot. They had to totally restructure his shot, so it’s understandable why he’s inconsistent. But why so bad? The majority of high school players can hit 1 of 15 wide open shots, and this guy is a starting SHOOTING guard in the NBA? Is he just a bad shooter? And if he is, why is he suddenly going from shooting 17% from 3 for his career before the calendar turned to 2015 to making his next 9 of 16?

The science of shooting is a combination of subtle mechanics and repetition. While Roberson is still getting his reps in, I think that because they changed his shot, he’s still not sure what feels "right" yet. Looking back at some of his worst games, the majority of his misses were little things. Like here, in a November loss against the Nuggets. 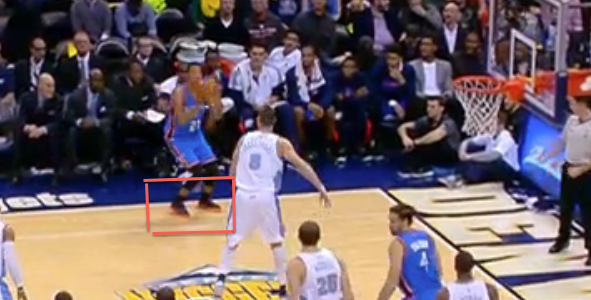 Basic footwork: Andre’s left foot is pointing toward the referee, instead of toward the basket, resulting in the shot being a bit off. It’s very hard to make shots consistently, with bad footwork. Footwork isn’t Andre’s only problem though. As you can see here against the Warriors. 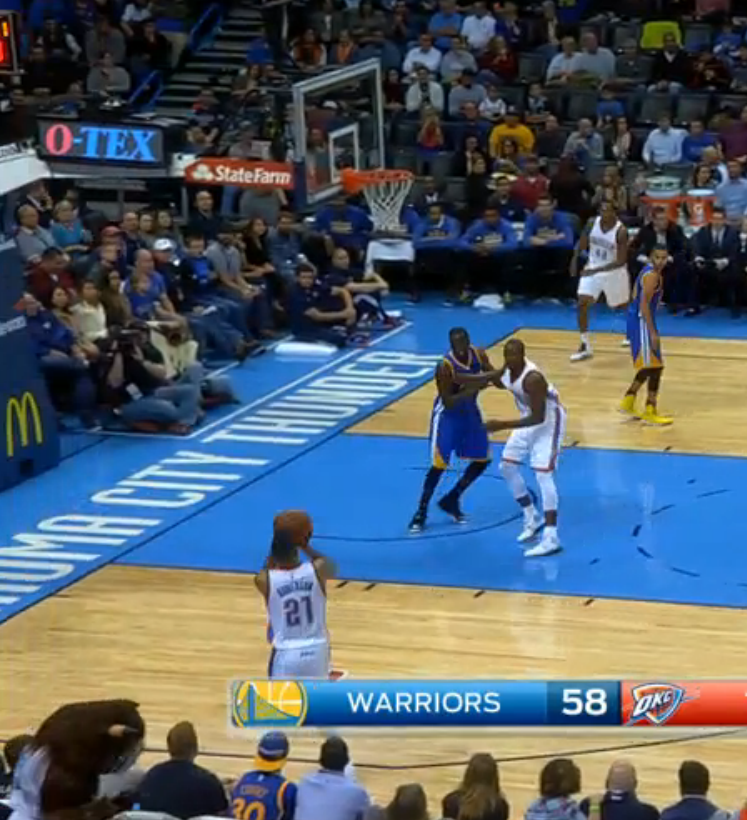 Shooting form: If you remember, this is the game where Roberson air balled a game tying three point attempt. This isn’t that shot, but this one missed too. You can see that the ball is almost completely blocking Roberson's vision as he elevates. To contrast, in an absolutely fantastic breakdown of NBA 3-point shooting leader Kyle Korver, one of Korver's basic "checklists" in his mechanics is to see the top of the rim. Some players will focus on the top and others on the front, but one constant principle is that you have to keep your eyes locked on it throughout the entire shooting motion.

Here is an animated gif from Roberson's 2nd game of the season. You might not be surprised to learn that this attempt resulted in an airball:

Fast forward. Take a look at Roberson's shooting mechanic from a week ago against Orlando: 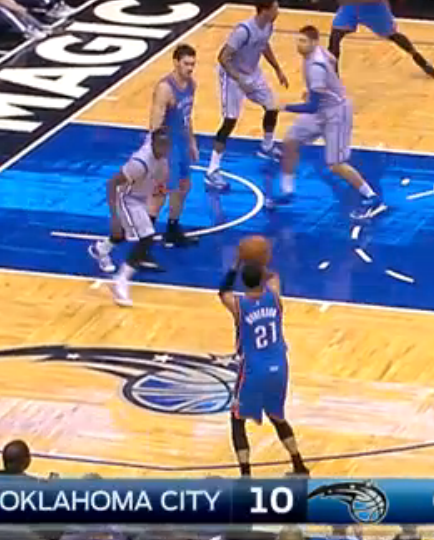 Here, the differences are subtle but distinct. His feet are better set, instead of pointing out in weird angles. His shooting vision is not obscured by the ball, as his elbow is in a higher position. The combination of these two things helps turn Roberson's shooting motion into an actual shot instead of just launching a push-shot moon-ball.

Here is a made shot from last night against the Nuggets:

Roberson's balance is still off, as he fades toward the baseline, but his legs and toes are in much better position when he receives the pass. As a result, he has better elevation in his jump shot. Also notice how much higher the ball is, no longer obscuring his view, and he releases at the top of his jump and shoots with his fingertips, instead of firing up a shot-put.

Here are the two attempts side by side:

On the left we see a shot that a high schooler would take because his muscles haven't developed yet. On the right we see something that looks much more like a bona fide NBA shot attempt. The differences are both subtle and dramatic, not the least of which shows up in the box score. Roberson's success brings to mind that Blake Griffin wrote recently about the evolution of his own jump shot:

You hear all the time that a player needs to "fix" their shot or improve their defense, but what some people don’t understand is that it takes hundreds of hours to make that tiny difference at an elite level.

With this mid-season "hot" streak, Roberson has bumped his three point shooting percentage up to a slightly less than respectable 25%. To compare, Russell Westbrook and Reggie Jackson are both shooting 28% from deep, while Dion Waiters is making 26% of his threes.

Maybe Roberson isn’t as bad as we all thought.