SB Nation NBA Theme Day: what is the best game you ever saw live?

SB Nation's Theme Days of Summer continue, and next up is the favorite game you ever witnessed live. What's your answer?

Share All sharing options for: SB Nation NBA Theme Day: what is the best game you ever saw live?

Today WTLC brings to you our annual summer series, SB Nation Theme Days. Previously we wrote about where we thought we'd see the Thunder in 12 months. This week's theme is a simple one: what is the best NBA game you ever saw live?

I have a confession to make. I have only seen the Thunder play live one time, and I rarely go to NBA games. From my own particular point of view, I enjoy watching games more by sitting alone in the dark where I can concentrate on what is going on without distraction (that's not creepy, right?). The later the game the better, because it means that if I have to recap it, I will be alone with my thoughts as I groove out to Wynton Marsalis and John Coltrane while sipping on a neat glass of Basil Hayden. 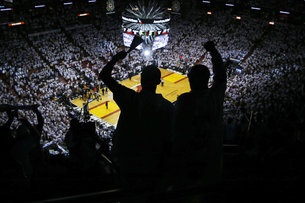 The SBN editors put together a tremendous collection of personal experiences in the best games they witnessed live.

In this light, my choices for my favorite game are sparse. I do know that I've never actually witnessed any NBA game of significance. I've sat on the floor at MSG, witnessed Allen Iverson flying up and down the court, and I saw the weirdness that is "Agent Zero" Gilbert Arenas. I saw Kevin Garnett in a Timberwolves jersey and I saw Michael Jordan dunk in the Carrier Dome. But never, ever, have I witnessed anything transcendent.

Instead, I have to look at it another way, and that other way is that I look toward my friend and brother at arms, Jeff Clark of CelticsBlog. Way back...waaaaay back...in the day, before 9/11 when security was a lot more lenient and a lot less gropey, it was not uncommon to be able to go into stadiums and arenas and negotiate with the ushers to improve your seating if the game was not at capacity. Jeff and I did this with regularity in a variety of ways.

On once instance when he and I resided together in Washington, DC, we took a trip to the Verizon Center, back when it was still known as "state of the art," to catch the Wizards play...whomever. Doesn't matter. We rolled up on the hizzouse and got friendly with the arena ushers and asked if there was any way we could get our seats upgraded. She said, "Eh, why not?" and took us to ticket services to see what could be done (actually, this is proof that we were probably watching the Wiz play some awful team like the Nets). After some paper pushing because it was clear nobody really cared, they told us to go to a new section that was down 2 levels. Everything is awesome.

Jeff and I make our way there, check, double-check, and triple-check what they wrote on our tickets, stare at each other for a moment, and then stride into a corporate box  owned by Ernst & Young. Other young professionals were already milling about inside, snarfing down the free food paid for by some papa bear partner, talking about making partner one day, and trying to act like BSD's. They didn't give us a second look, so we sat down in front and took in the game.

I was trembling with excitement over our good fortune. Jeff was hungry. Jeff also has mad game, so he casually unfolded his 6'5" frame, walked over to the buffet table, filled up his plate, grabbed a beer, and dug in. I quickly grabbed a celery stick, because I too am a risk taker.

There we were, two future captains of blogging industry, he a Rockefeller and I an Ian Faith, living the NBA version of "Wedding Crashers."

Eventually one more senior looking guy approached us and asked which group we were with. Audit? Forensics? Tax?

I almost bailed out by flopping over the guard rail. Jeff simply responded we don't actually work with the company, but that we were just, "checking it out."

"Ah well," he said, picking up some more chicken fingers. "Eat up, the food's already paid for."

We sat there until the end, watching a horrible NBA game, eating wings, sipping beer in a can, all on another company's dime. The best was yet to come, but we were off to a good start.

Now it is your turn. What is the best game, Thunder or otherwise, that you saw in person?