CBS Sports ranked all of the NBA head coaches, and Scott Brooks finished middle of the pack, despite great success over the past 4 seasons. Is it justified?

CBSSports released an NBA coach ranking list, and guess what? Thunder's Coach Scott Brook is ranked in the top 10 category with a rating of 6.5, and two coaches who didn't show up in the 2014 playoffs were ranked ahead of him, Stan Van Gundy and Jeff Hornacek. fair enough? 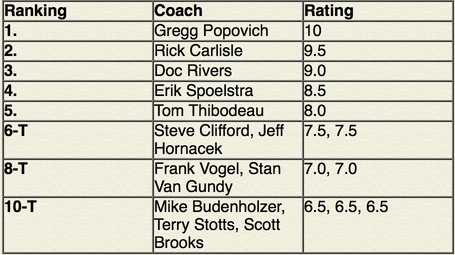 Well, I think it's fair. We can't deny how successful SVG was with the Magic. He turned Dwight Howard into one of the top defensive players in the league as well as turning the Magic into an elite defensive team (awkward interviews not withstanding) and now as he acquires a higher position being a head coach of the Pistons. Concerning Hornacek, when everyone expected the Suns to be unsuccessful in the league, has turned that team as one of the most unorthodox and promising teams in the west. Also, he dominated several tough teams in the regular season and almost secured a spot for his team in the playoffs.

Brooks drove the Thunder to the NBA finals in 2011, made three Western Conference finals appearances, and secured the Thunder in the top two seeds in the Western Conference in every year. I cannot deny that he failed once to make it to the finals in 2013 but that was in large part because of Westbrook's knee Injury. In the 2014 playoffs, the Thunder fell short again, but their team faced in the Spurs one of the highest performing teams in the past 20 years, as well as dealing with another injury, this time to Serge Ibaka.

Brooks does tend to make several key decision-making mistakes in the game, but despite that he still puts the Thunder in a satisfying spot in the league. Even after the Thunder's devastating lost against the Spurs in the WCF, Brook's should already be ready in terms of learning from his mistakes.

The team's roster is better now than the previous one and is more stabilized with better, younger talent. We witnessed two key departures in Thabo Sefolosha and Caron Butler but in return several key players had been added such as Anthony Morrow and Mitch McGary. Brooks no longer needs to worry about having a poor guard in the SG spot since Morrow, Lamb, Jackson, and Roberson can now fill that spot. Also, he no longer needs to worry about the center spot as well, as Steven Adams can play as starter, making the OKC front line even more dynamic.

Moreover, he is going to have a healthy Kevin Durant and Russell Westbrook. He just needs to be careful in utilizing the player's minutes (Durant was clearly fatigued in the Spurs series), and getting the young players involved. Brooks preaches defense first, but it has been his offense that has not played to potential, so this is where the team needs to grow the most.

That being said, I believe its either now or never if Brooks wants to prove himself as one of the decent coaches in the league because its unknown how will the look team's roster be in the future, especially that Durant may be testing free agency soon.

In my opinion, I feel that the Thunder will witness their best franchise year in 2015. They are going to have the best record in the 2014-2015 regular season and bring Oklahoma City a NBA championship, and Brooks will be part of the reason why.