In a game for all the marbles and team bragging rights, the 1996 Sonics defeated the 2012 Thunder in an epic game 7.

(WTLC and Sonics Rising's virtual clash between the '12 Thunder and the '96 Sonics has finally reached its end. After an amazing recovery in the series after falling behind 3-1, the Thunder battled back to force a game 7 in Seattle. Here is how it unfolded.) 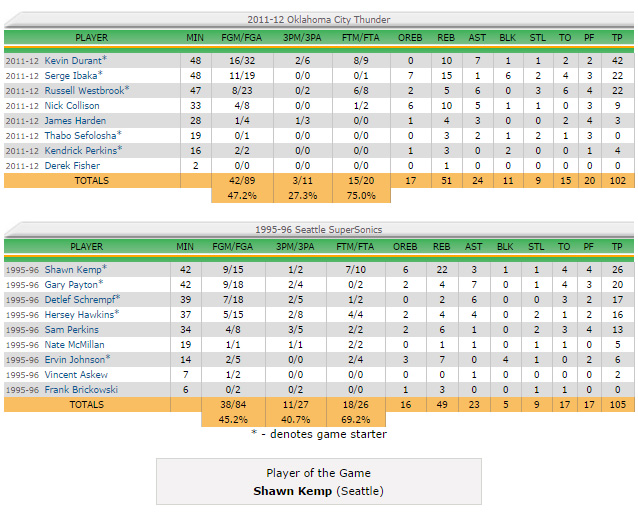 The team over at www.WhatIfSports.com ran a simulated seven game series to determine who the best team is/was. This week, we close out this fantastic, albeit, digital championship series.

Early on in the series, with the Thunder down 3-1, it looked as though things might close quickly and that the matchup was clearly in the Sonics favor. But Durant and company were having none of that and fought back valiantly to force a game seven.

A play here, a bounce there, and things could have ended very differently. The Thunder represented themselves well. That is saying something considering how hard this very same Sonics team pushed what is historically considered among the best NBA championship teams ever - the '96 Chicago Bulls.

Sonics Rising: a Measure of Revenge 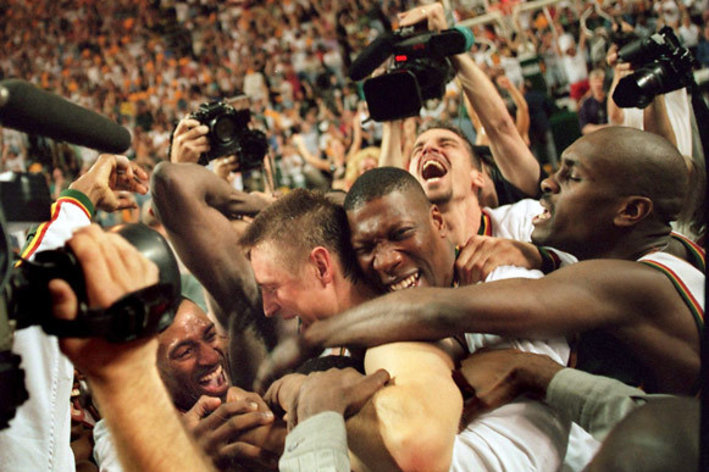 The '96 Sonics took game 7 from the '12 Thunder in spectacular fashion.

Game 7 started off very much in the favor of the Thunder, who jumped out to the early lead. The Thunder were up 14-5 in a blink following the opening tip, helping quiet the largely unfriendly Key Arena crowd. OKC struck first in this heavyweight fight showing they still carried the momentum from the previous two games. Much to Thunder fans' delight, they didn't let up and continued to push their advantage to a 32-17 lead a the close of the first quarter. While nobody believed the Sonics were out of it yet, this was a great opening round for the Thunder. As has been the case far too frequently after a white hot start, the question in the back of the mind was about whether the Thunder could maintain this pace. Offense is clicking, defense is playing well, the ball is moving. Let's keep it up!

The Thunder defense kept playing at a high level in the second quarter, but shots that went in to start the game started to roll out and rim out. This led to the offense stagnating, and some late in the shot clock shots that were not what coach Scott Brooks was looking for from his offense, and from his two stars Kevin Durant and Russell Westbrook in particular. Sonics coach George Karl saw these issues and used them to his advantage by cranking up the pressure on defense to put the other Thunder players into uncomfortable positions on the court. Karl's defenses have always been a feast or famine sort of thing, and in the second quarter, they were feasting to the dismay of Thunder fans everywhere. While it seemed as though the Sonics dominated the second quarter, they only actually had a 23-15 advantage bringing us to halftime with the Thunder still up by 7 (47-40) going into the break.

The third quarter was one of those magical moments in the NBA where it seemed as though everyone agreed at halftime to quit playing defense for the next 12 minutes of court time. Both teams came out on fire, lighting the scoreboard up like a pinball machine! This was the highest combined offensive output of the whole series (quarter)! Had you told most Thunder fans that their team would score 32 points again in the third quarter, most would've celebrated thinking the Thunder were finally putting away the Sonics. There was some great back and forth between the teams, but where the Thunder seemed to misfire here and there, the Sonics were shooting as though the basket was a mile wide. All the shots were falling for them, all the balls bouncing their way, and all the calls coming up green and gold. Shawn Kemp, who was somewhat neutralized early in the game due to foul trouble, once again established his dominance inside to help pace the Sonics in the third quarter. Kevin Durant's 14 points in the quarter were matched by Kemp on the inside going for 14 of his own as well. The biggest difference though was that Kemps came with 6 offensive rebounds as well. The quarter closed with the Sonics holding a 6 point lead and the momentum going into this final fourth quarter. OKC and Seattle have shown the ability to take the best the other could dish, the question remaining was whether one or the other might blink first in this closing round.

Fourth Quarter: I won't back down.

With all the ups and downs of this game, and this series, the fourth quarter was the pinnacle of the series. The Key arena crowd came back to life after the Sonics' heroic effort in the third quarter, and now nobody was sitting until the ride back home.

Much to the Sonics fans disappointment though, OKC came out swinging to open the 4th. The Thunder regained the lead on a 12-4 run, putting the crowd that was moments ago electric all on edge. Their beloved Sonics had had the lead in the previous two games in the closing period, only to let victory slip from their grasp. Would this be a replay of games 5 and 6? George Karl took a timeout to slow the Thunder run and make some adjustments for his team to finish the game.

No change was readily apparent following the timeout, but it still seemed to have had the effect that Coach Karl had wanted. The Thunder started missing easy shots, shots that had been going in all game long. Hersey Hawkins for the Sonics hit two back to back 3's while the Thunder were stumbling their way to 7 straight misses from the field leaving the Sonics up 103-100 with just over 2 minutes to play. The Thunder were still in it, but needed to find a stop and get a bucket or three to swing this thing back around.

Westbrook saw this need and took it upon himself to close this game out with a win. There was a win waiting to be taken, and he was the man who was going to make it happen. But as Thunder fans know all too well, this sometimes does not go as planned. Rather than playing off of Kevin Durant and James Harden to open space for himself, Westbrook got tunnel vision and tried to do it all on his own. When his first shot didn't fall, he just tried harder on the second one. And the third one, and the fourth, and before you could blink Durant hadn't taken a shot down the stretch and Harden was nowhere to be found on offense.

Despite all of that, the Thunder were given one last chance as the game drew to a close. Shawn Kemp was fouled to stop the clock with the Sonics up only 1 with just a few seconds remaining. Kemp hit both shots, and the Thunder called timeout to set their final play. Who would get this final shot? Durant? Harden? Westbrook? Whoever caught the inbounds pass? Everyone expected the Sonics to trap and switch everything to create havoc in the closing seconds. So when Kevin Durant curled off a Kendrick Perkins screen on the left wing and found himself WIDE open receiving the inbounds pass, Thunder fans believed the game wasn't over yet! Durant caught the ball cleanly behind the three point line, elevated and stretched his arms out in glorious fashion on his release in one of those real life moments where all of time some to a screeching halt. You can remember the taste of the nacho cheese from those moments, the smell of the spilled beer from the second quarter, the sound of deafening roar and silence simultaneously. And then, the ball careened harmlessly off the back of the iron as Russell Westbrook slumped to the floor in agony. Sonics win 105-102.

Westbrooks' heart and desire to win can never be questioned, but his shot selection certainly could be - particularly when one of the best shooters the game has ever seen is waiting quietly over on your wing. That Durant hadn't taken a shot down the stretch in nearly four minutes and then found himself with wide open look at the basket would seem perfect in most cases, but it didn't play out today. Does Durant need to step up in the future and demand the ball more in those situations? Could Scott Brooks have made some changes and calls to avoid the way it went down? And where exactly did James Harden go? While this team has shown to have the parts to be a championship team, can that all be put together in a way to make that happen? A lot of questions left for the off season. A lot of heartbreak to get over. And a lot for the Thunder and their fans to be proud of and draw hope from. A young team team with a superstar duo at the core and a high caliber third option on offense with an increasingly stout interior defender in Serge Ibaka. Things can only go up from here right?