Team USA vs. Team Europe? Nothing but American Arrogance

Many complained about the lack of quality in team USA's opponents, but those hoping for a Pan-European team are shattering the very foundations of what could be the next global sport.

Share All sharing options for: Team USA vs. Team Europe? Nothing but American Arrogance

Before I die, probably some 60 years from now, I believe that basketball will overtake soccer as the world's most popular sport.

But, as it stands, I'm reading countless articles from American journalists who want to destroy the possibility of that ever becoming a reality. I keep hearing things about other countries merging together to form more formidable teams, casting aside national boundaries for the sake of giving the Americans some real competition.

Their reasoning usually goes thusly: Because of the USA's massive population, it's impossible for other countries to get the talent pool necessary to compete at that level. I've also heard foreign coaches use it as an excuse, and it's a silly one. Let's use the soccer world cup as an example. In the tournament alone, there were more than enough upsets to disprove that point. The Netherlands, a country of 17 million people, was able to defeat Mexico, a country of 118 million. Costa Rica, a tiny country of 4.5 million, was able to beat Greece, a country of 10 million. Germany, a country of 80 million, absolutely thrashed Brazil, a country of 202 million. The list goes on, and it occurs in pretty much every single FIFA World Cup.

Now, I know what some of you might be thinking. "But no one cares to see Team USA blow out opponent after opponent!" Really? No one? Here was the scene outside Serbia's team bus, after they had gotten creamed by 37 points: 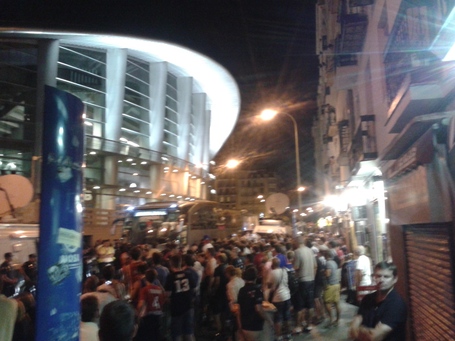 Here was the scene when that team returned home, after getting creamed by 37 points. (I don't have the rights to this image, but check the link.)

Fact is, other countries do care. And they're extremely proud of being able to represent themselves. And most of the countries that actually care about basketball are in Eastern Europe. And in Eastern Europe, as you can imagine, the populations of those countries are extremely proud of their autonomy. They want their shot at the US, and giving them their shot at the US is part of what keeps basketball interest in these countries alive.

In West Europe, the recent success of their countries is what helps generate interest in the sport. I've personally seen the success of the Finnish team turn their fanbase from a tiny pack of 200 in Lithuania to a large crowd of 12,000 in Spain. It'll be a long time before Finland is ever good enough to seriously challenge the US, but I really doubt a pan-European team could have generated such interest. Nor could a pan-European team have brought as many Puerto Rican and Dominican fans to Madison Square Garden in New York, whom significantly outnumbered and outcheered Team USA's fans in both contests.

Moreover, those complaining about the lack of population size in the countries are forgetting that the United States is soon to have some competitors in that area. Obviously, China is the most populous country in the world, and the popularity of basketball is skyrocketing among the youth. Just below the USA, you've got countries like Brazil, where basketball has long been a part of culture and solid prospects are consistently produced. Even some mid-range countries, with around 50-30% of the USA's population, could stand a chance of fielding a dangerous team in the near future. Places like Nigeria, Russia, Mexico, and the Philippines.

Think about it. Players who are a part of basketball's international scene right now grew up in the 90s. In the United States and Eastern Europe, it was the era of admiring and competing with Jordan and all those folks. In China, half of the teams in the CBA were composed of Army and Air Force servicemen. By the late 90s, small college American barnstormers were able to tear through the Chinese league.

Other countries didn't have much of a basketball scene, either. The Philippine Basketball Association only allowed those of Filipino blood into their league. The Mexican professional basketball league didn't even exist. And Western Europe didn't have nearly as many high-tier basketball players as they do now.

Imagine where all of these countries could be in 20 years. You could look at the slated prospects over the next couple of years and naysay me, but I think it's a process that's just going to take time. We're only 20 years removed from the Dream Team, whom literally had opposing teams taking pictures of them from the bench. As someone who actually attended all of Team USA's games, I can assure you that's no longer the case. Every player was serious about giving his all, and numerous coaches were willing to pull out all the stops against the US.

Anyway, I know I'm rambling on, but I really feel like a continental team would do nothing but keep basketball as a specialized sport. It spits in the face of countries that wouldn't get any chance to be represented, despite the fact that they were the earliest and most fanatical adopters of the sport. It also limits access to those who might want to see Team USA play closer to their home country for a reasonable price. I can't tell you how many people I met who made a road trip specifically to Bilbao because Team USA was playing. That's got to do something to generate basketball interest in those countries, and creates an experience for them that lasts a lifetime. A Team USA-Europe clash would likely be out of reach to most middle to lower income fans, and likely held in bigger cities.

At the end of the day, I just don't see the benefit to destroying national teams, other than for some short term entertainment. Don't we already get enough mixing and matching in the NBA? Let the clubs bring the entertainment. Let the countries bring the pride. After all, if Team USA is as good as you say they are, you only have to "endure" these blowouts once every two years.

Bring the haterade in the comments!