Poor shooting hurt Team USA early, but a second half adjustment had them blazing in the second half. Find out what the adjustment was within!

If you watched Team USA's quarter-final victory over Slovenia, this game had to feel like a little bit of a replay. After low shooting percentages, a high turnover rate, and a high foul rate kept Lithuania close in the first half, a third quarter surge saw the game bust wide open in a hurry. By the time the fourth quarter rolled around, the game was pretty effectively done.

In the post game press conference, Coach K hinted at a half-time adjustment in his opening statement. I had a question prepared about HORNS, so I semi-altered it at the last second to ask whether stopping the high post entry pass in that set was a part of his half-time adjustment. He told me I was wrong, but I did get the adjustment out of him....

"The reason that they scored wasn't because they were running plays off HORNS. HORNS is an elbow set that screens the two bigs away from the basket. What they were doing on each side was driving an unoccupied low post. It was tough to get help there. And the adjustment we made was to get the ball to come back to the middle. Which is something we don't usually do. But that's where all their guys were. Once we did that, and started switching 1 through 4, it made it difficult for them. And it was a huge, good adjustment by our guys. And well planned by them to begin with, because it was something they don't normally do. They did something a little bit unusual, which is what we should expect from outstanding coaches and outstanding teams."

Looking at the most successful Lithuanian players in the first half, it's easy to see where Coach K's words have merit. Adas Jusikevicus, normally a three point specialist, was able to drive into the paint from at least three quarter court and get to the line three times. Moreover, Mindaugas Kuzminskas, Lithuania's backup Small Forward, was able to post up the smaller James Harden for 12 points in the first half. This, combined with a floor-spacing three from Lavrinovic and Jonas Valanciunas trolling in the paint for fouls, gave Lithuania the majority of their first half performance.

But, as Coach K indicated, Team USA was able to counter by forcing the ball to the middle and switching on defense. Lithuania hadn't shot well from three up to that point, so their solution was to pound the paint. (See shot chart below.) They didn't find much success, and the commitment on offense was causing them to lose control of the pace of the game. 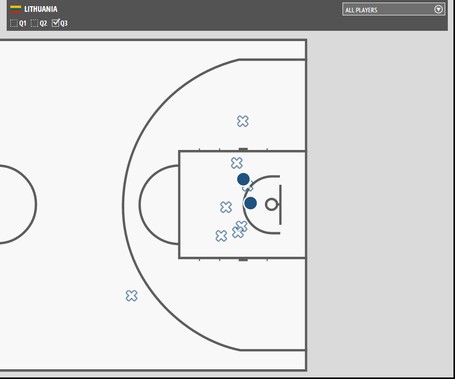 Individually, the story of the game had to be James Harden. He struggled in the first half, much like he did against Slovenia in the last round. But the increased pace of the game in the third quarter allowed him to blossom. He would end the period with 16 points on 6 of 8 shooting, 2 rebounds, 3 steals, and only 1 turnover. OTher than the pace of the game increasing, I'd attribute his surge also to his great one-on-one ability, since Lithuania generally struggles to guard iso-heavy guards on the perimeter. At least, when the opposing team has inside presences to worry about.

Speaking of the bigs, Anthony Davis and Kenneth Faried struggled to score in the first half. Faried couldn't post up much on Motiejunas, and his two mid-range jumpers were no gos. Meanwhile, Anthony Davis missed a couple of makeable shots, but it's not like Valanciunas was giving him constant position to score. Both were able to do significant damage in the second half once things got out of the half-court, though.

So, who did do anything for Team USA in the first half? That man had to be Klay Thompson, who was recognized by Coach K for his services in that area post game. He was an outstanding 4 of 6 from three in the first half, scoring 14 points overall. On a team where consistent shooting is a luxury, it's nice to have a catch and shoot player like Thompson. He's no Kyle Korver, but he can get the job done sometimes.

The point guard position continues to intrigue. Team USA's practice yesterday was full of questions about Derrick Rose, and Coach K made it pretty clear that he wanted Derrick to be aggressive. (He's said that for quite a while now.) Derrick pretty clearly had a good matchup advantage and got the shots he wanted, but he just couldn't hit a shot. He finished the half 0 of 6, and would finish the game 1 of 8. I know the guy can shoot. I've watched him hit shot after shot after shot in practice. All you can really say is that he probably just needs more time to get back up to speed. Meanwhile, Kyrie Irving took full advantage of the matchup advantage he had. He similarly struggled with a 2 of 8 shooting performance at the half, but found a lot more success taking it to the hole once things opened up in the second half. He was a ridiculous 6 of 7 from the field then, and even managed to add on 3 assists.

On Lithuania's end, there's not much more to say. They just couldn't manage to break into the paint in the second half, and their shooting was never there. In the words of coach Jonas Kazlauskas, "When you're playing US team, you cannot lose control for one minute."

Moving forward, the only real negative you can take from this game is the foul trouble that Team USA managed to get into. They spent over half of the first quarter in the bonus, and spent about the last two minutes of the second in the same situation. It's understandable when you're trying to generate turnovers, but it's one of those little things that can make a big difference.

Still, who's worried? This may go down as one of the best Team USAs of all time.

What did you think of tonight's game? Drop a comment and let us know!