Does either coach have the ability to swing this series?

The Sonics' George Karl has won 1,131 games in his career and if he never coaches another day, is a sure-fire Hall of Fame Candidate. The Thunder have Scott Brooks, who once did this.

Now, extending beyond that, George Karl has been a coach for 25 NBA seasons, and in those 25 seasons, only his '96 Sonics advanced to the Finals. Throw out win percentages (which are great), disregard eras, and just look at that basic fact. Understand that while Karl has had a wonderful NBA career and built a tremendous resume, winning it all, or even being in the position to win it all, isn't anywhere on there. 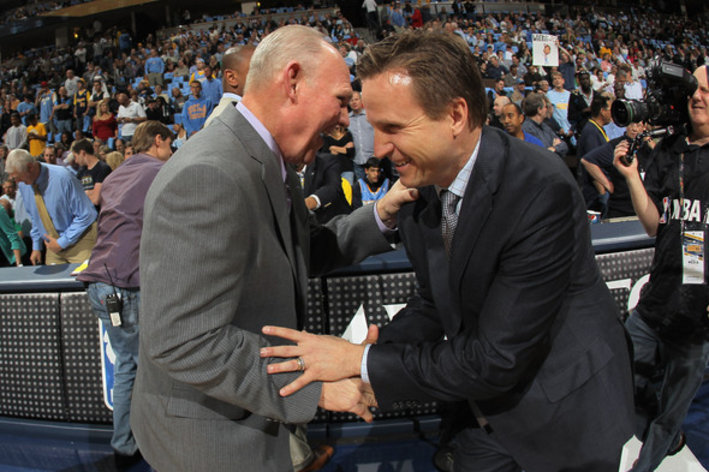 George Karl had his own struggles, but Sonics Rising argues that when it comes to coaching, Karl vs Brooks is no contest.

Similarly, we can go on all day long about how frustrating Scott Brooks can be as a basketball coach because it's been well-documented by about 8 billion websites, publications, and any other place where folks have strong opinions about things. However, just for the sake of this comparison, let's rehash Brooks' 'issues' really quick right here.

Essentially, Brooks has a weird obsession with trusting veterans over letting young guys develop, and also tends to rely heavily on the ability of his stars to improvise and create offense on their own while failing to devise any form of creative offense, particularly in crunch time situations. These issues always seem to be the unraveling of his supremely talented roster in big-time playoff moments. Does that about sum it up?

All of that may be true to some degree, but it discounts what Brooks has accomplished. In his seven seasons as coach of the Thunder, he improved his team's winning percentage in every season except the most current, and he only missed matching that total by one game even while without his second-best player, point guard and floor general, who missed 36 games. His teams have also made it out of the first round of the playoffs in four straight seasons, as well as finished in the top 10 of offensive efficiency in four straight seasons while simultaneously finishing in the top 10 in defensive efficiency in four of the past five seasons.

Now, you could argue that a great deal of that has to do with the fact that Brooks has been blessed with extremely talented players and, as the cliched argument tends to go, the team has won in spite of him, rather than because of him. Of course, I could also argue the exact opposite. It takes a certain breed of coach to sit back and relinquish control of the game to his players, especially those as young as Durant and Westbrook. Yet Brooks has recognized the absurd talent he had in his two stars and trusted them to make the right decisions to help the team advance and play winning basketball. Oh, and judging by his track record, it's worked! Throw in the fact that a Westbrook injury derailed 2013, and Serge Ibaka's injury at least had some effect on the team's 2014 run, and maybe Brooks wasn't so far off from being better than Karl in his seven seasons as head coach.

This is what Scott Brooks' MVP has to say about him:

Meanwhile, we've just spent an entire week comparing the rosters of both the '96 Sonics and the '12 Thunder, and by most accounts (or maybe it's just the fact that the Sonics guys comment more), Seattle has the superior roster. If we're arguing that Brooks rode his talented roster to his only Finals appearance - which again, happened in his first five years as a head coach, while it took Karl nearly twice as long - then what does that say about what Karl was working with and what he was able to produce?

The point is, both coaches have similar reputations for having talented rosters and not capitalizing on it with championships. Just as Brooks takes a lot of heat every May for blowing up late-game situations, much of the same criticism has been levied on Karl at some point in his career.

For this particular matchup though, you do wonder if Brooks would fall into the same trap he did in the '12 Finals against Miami, the one that led to his heaviest criticism that still continues to this day: playing Perk. J.A. touched on it in the bench preview, but the Sonics relied heavily on their own Perk (Sam Perkins) during their series with the Bulls. The difference there, of course, is that Perkins can stretch the floor, similar to the way Miami used Bosh to stretch out the Thunder and run Kendrick Perkins off the floor. Or, at least, should have been run off the floor.

There's a chance virtual Brooks actually recognizes the matchup disadvantage and uses Collison more to keep up with the speedier Sonics. Of course, there's also a chance virtual Brooks follows real Brooks' lead and stubbornly sticks with Perkins for five minutes too long each game, putting the Thunder in a hole they can't climb out of, and rendering the previous 700 words of defending Brooks' track record ultimately useless, because he would be falling into the very traps that have kept people from trusting him to begin with.

Look, what it comes down to is this: both coaches have been successful by using their respective roster talent to win plenty of games, and have similarly been unsuccessful in utliizing that talent when it matters most. Neither coach really has an edge, and if anything, it's going to come down to who screws up less, as opposed to who coaches better. That said, it could go either way.