The Thunder bench in 2012 featured one guy who seemed to carry the load, but what else could they do against the 1996 Sonics?

Share All sharing options for: 2012 Thunder vs. 1996 Sonics Clash: battle of the benches

The Thunder bench in 2012 was vastly different than what you see today. How would it have contended against the dynamic and flexible Sonics bench from 1996?

This analysis is where the series could be transformed. Up to this point, the only position where the Thunder have a clear and decided advantage is at the small forward position between Kevin Durant and Detlef Schrempf. Is there anything left that could potentially tip the scales? 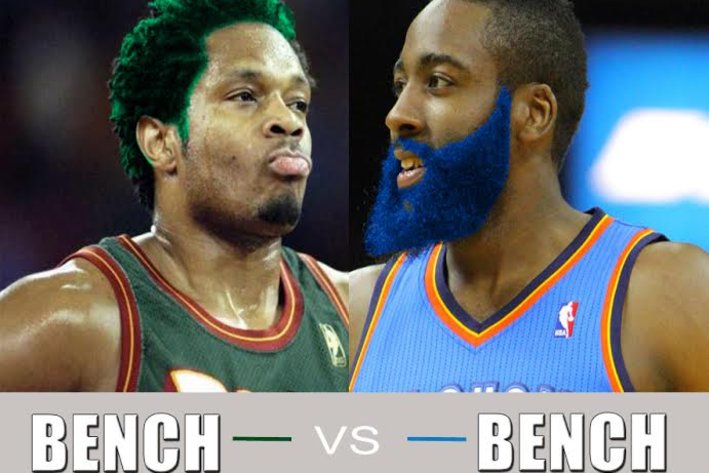 The Sonics had a superb bench in '96. But is it good enough to take down James Harden's bench mob?

The bearded one. Big Game James. A guy who can score 40 points off of 17 shots in one game. The bane of Thunder fan existence since the summer of 2012. But for this series, we get to have him back.

What could Harden bring to the table? He's the solution for everything that ails the Thunder when they digress into ISO ball. If the Sonics guard Durant with their best player and Russell Westbrook is struggling, there's not much left defensively to slow down Harden. The power in Harden's game lies in its simplicity, in part because he never had to face the other team's best defender. He uses screens to perfection, only takes good shots, and works his way to the free throw line aplenty. And did the "Euro-step" even exist back in '96?

Now, of course you will say, 'what about Nate McMillan?' Great defender and glue guy, to be sure. If we're talking pure 2nd unit competition, I agree with your point. However, we also have to take into consideration the 4th quarters of games, and this is where OKC can shift into overdrive. If Harden is in the game, the Sonics are going to have to cede something, because now you've got Payton on Westbrook, McMillan on Harden, and Schrempf on Durant. One of those matchups gets exploited, because you can't change up the defensive look because it just opens up another hole to exploit. Do you want to live or die on Schrempf's ability to shut down Durant? Switch Payton on him, and Westbrook honey badgers his way into the lane at will. Switch McMillan on Durant, and now you've got Harden dub-stepping his way to 25 points on 10 shots.

The key is this - by adding Harden to play along side the starters, as was the custom in 2012, the Thunder gain a competitive advantage that can take them to wins in this series.

If Harden is the not-so-secret key to the series, Nick Collison might be the truly hidden key to helping the Thunder overtake the Sonics. We've written already about how Shawn Kemp would do against Serge Ibaka, in part because Ibaka in 2012 was still very raw in his defensive positioning and discipline. Collison however would bring excellent veteran presence and experience. Nick has had remarkable success guarding everyone from Dirk Nowitzki to Zach Randolph to Tim Duncan. While he might not be able to bottle up Kemp entirely, he would give a radically different look defensively that would definitely slow down the Reign Man. Furthermore, when the Sonics decide to insert Big Smooth Sam Perkins into the lineup to stretch the defense (and send Kendrick Perkins to the bench), Collison would be quite capable to stay with him on the perimeter.

On top of that, Collison has always been a very good mid-range jump shooter, and his ability to both pick and pop as well as roll to the rim would make him a hidden force offensively. He and Harden had great half-court chemistry, and OKC would need it against the swarming Seattle defense.

And now we get to all of our most debated Thunder guy, Derek Fisher. He was brought to the team in the latter part of 2012 because a) OKC lost Eric Maynor to a torn ACL earlier in the season; and b) rookie Reggie Jackson was not ready for full backup PG duties.

On paper, it made sense. Fisher was a seasoned veteran with championship experience, and having him play backup to Westbrook would provide some stability to the bench unit, some timely 3-point shooting, and to be a good locker room presence.

As we know...that's not exactly what happened. Fisher was essentially handed starter level minutes, and his stats did not scale with his additional playing time. It was a frustrating affair as he did all he could but was simply not well equipped to do much more than spot-up shooting.

However, in our virtual tournament, Fisher plays 15 minutes a night and doesn't see the court in crunch time. Got it?

Instead, this is the guy who keeps his minutes. Against the Heat in the Finals, Cook was a non-factor because he never played, and we could see how dearly his shooting was missed. In my scenario, he stays on the court. DC-4-3!

In total, the Thunder bench had more than enough juice to not only outplay the Sonics bench, but also potentially tip the scales in the entire series.

What do you think?