The NBA's next evolution is the big man who shoots threes and defends the rim.

The role of the NBA big man has traditionally been to protect the rim. Sure, being tall means you can score over short guys near the basket and get to rebounds easier, but the first priority has always been to be the final line of defense against the opponent, and deterring the easiest shot in basketball: the closest one.

Ever since hand-checking on the perimeter was outlawed in 2004 and the league's defensive rules shifted more in favor of zone and help-based defenses, shooting has redefined the NBA. Floor spacing has been an almost necessary cog to every efficient offense, and few teams can score effectively against modern defenses without shooters spreading the floor. While traditional shooters at the wing slots have seen their market value shoot up (Jodie Meeks for $19 million over three years, anyone?), the player type that has really burst into demand in the modern NBA's evolution is the stretch big.

The likes of Ryan Anderson, Spencer Hawes and Mirza Teletovic have shot their way into a greater level of relevance than many folks would have expected just a few years ago. If a little guy that can shoot can drag the little guy defending him to the perimeter, imagine the impact of a big guy that can shoot dragging a big man defending him out of the paint! It's so smart! 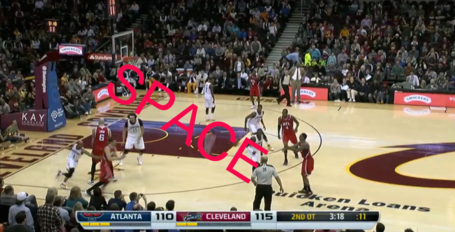 Outside shooting has already zoomed past traditional big man skills like back-to-the-basket scoring and rebounding ability in terms of desirability for a big man in the NBA, and it's right up there with rim protection in terms of value. If you can combine the two skills in your frontcourt, your bases are well covered with one guy who deters easy layups on one end and another who generates spacing on the other end. Grantland's Zach Lowe explained this recently, pointing out the sinking value of those big men that couldn't check off either box.

The big man that can check both off has seen his value spike. A single player that can shoot and deter shots at the rim breeds all sorts of flexibility in lineup configurations. Teams could effectively pair that big up with one of those bigs that don't shoot or defend very well, like a Greg Monroe, and mix-and-match from a greater selection of skills without having to put together spacing and rim protection across both big man slots. It's even possible to double up on shooting or defensive bigs for an Atlanta Hawks-ian offensive frontcourt or whatever defensive monster the Philadelphia 76ers are cooking up between Nerlens Noel and Joel Embiid, but one without limitations on the other end.

With that said, that ultimate big man doesn't really exist yet. Nobody combines specialist-level three-point shooting and one-man rim protection in one body yet. The 3-and-D big man might not ever be a common player type at the idealized level. Rim protectors are rare enough, and to find one and make a three-point shooter out of them is even harder. The closest we have now are guys with about one and a half of those two skills.

The prototype leading the charge for that player type may be Serge Ibaka. Defensively, he's one of the league's very best bigs. He's been a mainstay on the blocks per game leaderboard for who knows how long, and you know what he does towards anchoring a defense. In offensive sets, he's almost strictly a spot-up guy with impeccable accuracy from midrange. The only asterisk point for now is that his range is only starting to grow out to three-point range. He only made 0.3 triples per game last season, though his .383 three point percentage is nice. The extra range matters, both in maximizing points per shot efficiency and also in creating greater spacing out to the arc.

If Ibaka's three point shot continues to develop, then he could be the NBA's first bona fide "3-and-D big man." It's a small leap of faith to call him that now, but between the defensive prowess and the combination of high volume and high efficiency from midrange, I'll take the jump. He's probably the closest thing the league has right now.

After Ibaka, you have players that only loosely fit the bill. Al Horford looked on his way there last season after Mike Budenholzer gave him the green light to launch away from three, but his season was cut short by injury. Channing Frye is one of the league's very best three-point shooting big men and plays effective post defense, but he's more a cog to a good defense than a rim protector on his own. Timofey Mozgov, already a solid presence in the middle, quietly turned some heads as a shooter in the making, but he'll need to make his three point shot a real weapon and not the occasional trick play for serious consideration.

And that may be it. Like Horford, Paul Millsap was similarly freed to shoot by Budenholzer in Atlanta, but he's undersized and a very limited defender in spite of his effort. Chris Bosh meets the skillset criteria and he was right up there with Ibaka last season in breaking in the mold, but he'll likely take on a more hands-on role within the offense of the new-look Miami Heat. Similarly, Anthony Davis looks like he's well on his way to having the skills (he'll start making threes next season, mark my words), but he's more of a do-it-all superstar in the making than a role player. You wouldn't call LeBron James a 3-and-D player.

The simple fact is, players like Ibaka are rare. Few teams have had the opportunity to construct their roster with anyone similar on their team. The Oklahoma City Thunder have already toyed with his skillset some, demonstrating the benefits.

With a no-frills group of big men behind him, the Thunder haven't put together any particularly interesting front court pairings featuring Ibaka yet (unless you count him carrying the minimal contributions of Kendrick Perkins as interesting). What they have done is use small ball lineups, putting Durant and three guards with Ibaka. Durant doesn't really have the bulk for interior defense, but Ibaka can carry much of the burden on that end and the Thunder are free to plug in, say, Reggie Jackson where Perkins would've played for a better offensive lineup. Though small ball isn't anything new, Ibaka can still drag an opposing big man out of the paint in those situations for some unusual-looking sets.

The lane is clear for Russell Westbrook and Kevin Durant to get to the rim with Ibaka commanding attention out to the perimeter – in this play, Ibaka drags Blake Griffin out of the paint on a fake pick play, leaving all of the paint open for Westbrook to cut into. The key to that is that Ibaka offers the Thunder all the rim protection they need on the other end, eliminating the need to play a second big man dedicated to interior defense alongside him.

Pau Gasol would have been a fascinating case study alongside Ibaka if the Thunder had managed to ink him, since Gasol is one of those bigs that doesn't really shoot threes or help much on defense. The Thunder could have taken advantage of Gasol's other skills, like low-post scoring and passing, with Ibaka maintaining the necessary spacing, while also counting on Ibaka to hide Gasol's defensive deficiencies. The interlocking fit between Ibaka and Gasol's skillsets was probably a spurring factor in their pursuit of him this summer.

As if we don't hear this enough, it really is a shame that Scott Brooks isn't more creative with his offense (and I'm a Brooks apologist!). A more stylish coach could muster up all sorts of headaches utilizing Ibaka's skillset in various combinations with other types of big men or small ball lineups, with fun stuff like weak-side motion, misdirection and passing involved. Passing!

It's those kind of possibilities that entail the on-court value of a player like Ibaka. He gets you what you need most out of your big man – rim protection – and also generates spacing, so that the other players that you play him with don't have to serve that function. Such a player can add an entirely new level of flexibility to team building.

How those skills translate into a dollar value is a bit unclear at this time, so there haven't been many other players to compare. Ibaka signed a four year, $49.4 million extension two years ago, but his range hadn't developed to its current extent then and he'd likely make that money for his defense alone nowadays. Bosh got a max contract (five years, $118 million) this year, although he's a true blue superstar. Frye, a player more at the role player level, got $32 million over four years at age 31 last month. While we don't have a very firm grasp on the price range yet, what we do know is that these guys get paid the big bucks.

Make no secret about it, teams desperately want to get their hands on this type of player. Much of Noah Vonleh's draft stock was built off of his potential to combine rim defense and shooting ability. Kristaps Porzingis, who the Thunder were rumored to have given a draft promise to before he pulled out of this year's draft, is another guy that fits the mold. DraftExpress currently has Porzingis going 7th in their mock of the 2015 NBA Draft, a testament to the rapidly emerging value of his skillset.

It's definitely not for no reason that Denver began to let Mozgov expand his range this season. Hell, the Heat deserve credit for making an intelligent rim protector and a three-point shooter out of Bosh. Though it's hard to teach at-the-rim defense to those without the physical profile for it, teams will undoubtedly continue developing the deep range of their big men. In his piece, Lowe said this:

In talking to coaches and GMs over the last month, it's clear we'll see more teams pushing the corner 3 on bigs - the Chris Bosh-Serge Ibaka route. There could be some surprising names experimenting with the corner 3 as early as this season.

We're entering a new era in basketball, one where the merits of three-point shooting are being fully realized and welcomed. It's a fun and beautiful way to play basketball with five guys on the floor that can sink a 25-footer. Who knows how long it is before we get to that stage and whether or not we'll really get to there at all. But it shouldn't be too much longer until we get our kickass Kyle Korver-Roy Hibbert hybrid.