The '96 Sonics vs. '12 Thunder Clash: Thabo Sefolosha vs. Hersey Hawkins

A clash of pickpockets and pocket shooters.

Share All sharing options for: The '96 Sonics vs. '12 Thunder Clash: Thabo Sefolosha vs. Hersey Hawkins

Thabo Sefolosha has always struggled with the 3 and D role. The D part was no problem. His low center of gravity rendered him able to stop the greatest of scorers, and his ability to read and anticipate perimeter passes won the Thunder more than a few possessions. The three part is another story. His percentages might tell you that he was a good shooter, but you'd be completely wrong. For some reason, Thabo was never very good at knocking down standstill shots.

Hersey Hawkins, on the other hand, is the Thabo Sefolosha we always wanted. He made his living on the three point line, knocking down open shots next to attention grabbers like Charles Barkley and Gary Payton. Hersey would end his career having finished in the NBA's top 10 three point shooters on five separate occasions. That's not to say that Hawkins' D was lacking, though. He was also one of the NBA's top 10 stealers on four separate occasions. 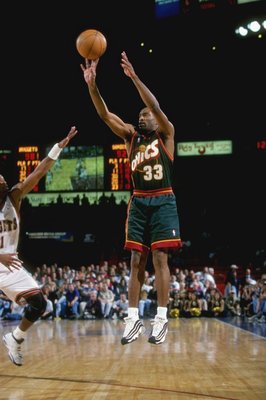 The Sonics had a deadeye shooter in Hersey Hawkins. Could Thabo Sefolosha slow him down?

So, how do these two compare? It should be obvious, right off the bat, that Hawkins is the better player in the context of his time. I have no doubt that Thabo would be able to get a steal and a few jumpers in, but the real question is how many points Hawkins goes for. Thabo was a notorious gambler, and 2012 was the height of the Thunder's poor perimeter defense. I could easily see Hawkins spacing the floor and killing us like Mike Miller.

Would it be possible for Sefolosha to have a better game? Definitely. But I don't think that his impact would be made offensively. Hawkins is fast enough to keep up with Thabo on the break, and Thabo's success in the halfcourt is directly related to his ability to make open shots. I don't think Thabo's impact would be defensive, either. He could probably keep Hawkins from driving to the basket too much, but as I noted above, Hawk is liable to rain threes.

Rather, Sefolosha's impact area would be in rebounds. He was a great rebounder for his position, and has a couple of inches on Hawkins in height. Statistically Sefolosha only averaged one more rebound per 36 minutes in the two seasons that we're comparing, but he was proven to be significantly more effective in that area over the course of his career.

If you look at the issue further, you'll find that offensive rebounds were a large part of the Sonics' demise in the 1996 finals. Obviously I'm just eyeballing box scores that I have no context for, but the proof is in the pudding. None of the teams that the Sonics had faced in the playoffs up to that point were particularly strong in the offensive rebounding department. Going along those same lines, the Sonics were 2-2 that season when facing the lowly 26-56 Dallas Mavericks. Why? The Mavs were the #1 team in the league in offensive rebounding at the time. I can only assume that forced the Sonics to pack the paint, allowing the Mavs to unleash on them from three.

I feel like Thabo's presence could have a similar impact. He was never much of a factor on the offensive boards, but his defensive rebounding was always really on point. The Thunder were able to crush opponents that way, and Sefolosha's excellent decision making out of those rebounds really helped the flow of the offense. But really, against these Sonics, as long as Thabo wins possessions, it's a win for OKC. The Sonics didn't give up many turnovers, so rebounding was the only way you could beat them without being better than them.

In a way, that's how Thabo made his career. We'll see if he lives up to his mantra.

Video of each player's career high: