The '96 Sonics vs. '12 Thunder Clash: Gary Payton vs. Russell Westbrook

Two premiere point guards who wore their emotions on their sleeves. Gary Payton was an elite defender with a more traditional skillset, while Russell Westbrook relied on an unprecedented combination of athleticism and confidence that revolutionized what we began to expect from a championship-level point guard. Which style would win out?

Share All sharing options for: The '96 Sonics vs. '12 Thunder Clash: Gary Payton vs. Russell Westbrook

(What if the 1996 Sonics and the 2012 Thunder faced off in a playoff series? WTLC and Sonics Rising kick off the player breakdowns with the point guard match-up between Russell Westbrook & Gary Payton.)

The individual matchups in this series are all intriguing, but something about this one feels like it has a little bit more. Shawn Kemp and Serge Ibaka will have crazy amounts of athleticism. Detlef Schrempf and Kevin Durant will have all sorts of tricks. George Karl and Scott Brooks will have all sorts of head-scratching moments. But Gary Payton and Russell Westbrook? That's going to have all of the trash talking.

The Sonics' side is already on record saying Payton would "crush Russell Westbrook and make him cry," which says just about all you need to know about how Payton is viewed in the grand scheme of things. In many ways, this matchup will say a lot about how you view this entire matchup.

Payton was never afraid of getting in opponents' faces: 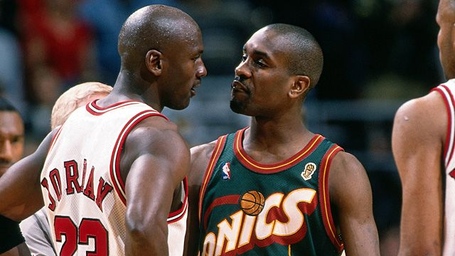 And Westbrook is of course not shy about expressing himself for the entire world to see. 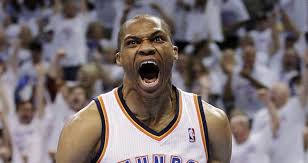 It's funny because in many ways, Payton's trash talking represents the very era in which his teams thrived. That brutish, take-no-prisoners mentality has somewhat gone by the wayside in favor of more friendly competition, a style embodied by Westbrook who thrives not through one-on-one trash talk, but by finding that flair that can ignite an entire arena.

That's what this matchup represents. You have Payton who, by most statistical measures, edges Westbrook. He passed more, shot more efficiently, played defense more devilishly, and had a mental edge that could induce terror into even the strongest-minded opponent. Seems like a no-brainer that he could walk all over a point guard in today's NBA, right? 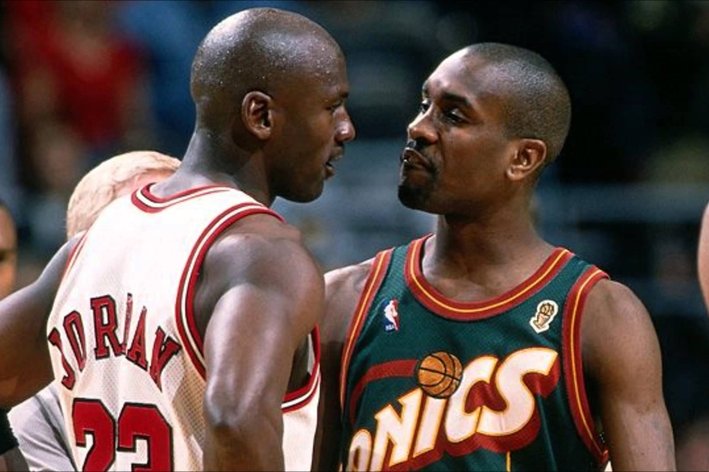 Sonics fans think that Gary Payton would have a clear and decisive advantage over Russell Westbrook. What say you?

And yet, all those numbers aside (which we'll get into in a bit), there's something about that statement that makes you wonder if Westbrook wouldn't be just fine against Payton: today's NBA.

Again, how you view each of these guys will go a long way in how you view this matchup as a whole. Because that old school mentality is the one that still prevails in many arguments against today's NBA. It's the reason Michael Jordan is still considered better than Lebron James in most social circles. It has everything to do with those factors mentioned above. Payton played the position in a traditional way, the way basketball fans have always believed it should be played in order to win championships. He passed more, he didn't play as much hero ball or force as many shots, and he played ruthless defense. Just in case you think he wasn't tough enough, he got in MJ's face and anyone else he was tasked with defending. In some convoluted way, that means these coddled superstars of today wouldn't stand a chance.

But then there's the other side of the coin. The one that suggests maybe today's NBA is just better. Maybe Lebron would walk all over MJ, not because the players of today possess enough of those traditional skills, but precisely because they don't play that way any more. Modern medicine, fitness, dieting, basically every technological advancement has bred a far superior athlete. So a guy like Gary Payton could walk onto an NBA court in 2014 and talk all the smack he wanted, only it wouldn't be little Steve Kerr or John Stockton across from him, someone that would willing defer to other teammates with Payton in their face, but it'd be Russell Westbrook or Tony Parker or any other point guard of today that would just go right at him. No deferring to a teammate, no backing down, just putting their head down and coming right at Payton.

That's not only what this individual matchup represents, but this entire '96 vs. '12 matchup is simulating. You have your old school crowd, the one that believes that standing by the principles that basketball was started upon would triumph, and you have the new school crowd that believes the style of play that has emerged in the past decade threatens to devalue those traditional principles and opens the door for a new era of basketball.

For matchup purposes, let's break down the Payton vs. Westbrook matchup a little further.

Westbrook shoots more, for a lower percentage (both overall and from 3-point range) in his 2011-12 season compared to Payton's 1995-96 season. Remember when I said that the numbers wouldn't favor Westbrook? This will likely bring up the same talking points that have stuck with Russ since basically forever. "He's a ball hog, he can't shoot, he only scores a lot because he shoots a lot." Those old school guys can be so infuriating.

Of course, they do have a point. Remember this was 2012, when pre-injury Westbrook was realizing all of his talents. Even in the two years since, he's found a way to better reign in his erratic moments. 2012 Westbrook was no stranger to tunnel vision over extended stretches that could clog the entire offense.

But it's not like Payton shot lights out, either. Just 3 percent higher in FG%, and just 1 percent higher in 3FG%, on a similar number of attempts. The point is, both guys aren't going to be deciding this series based on shooting alone. So you have to delve further into their games.

Again, 2012 Westbrook still hadn't found the balance between distributor and freak-of-nature scorer the way he has in the time since. He took more flak for that than he should have at the time, because he really was an able distributor when he needed to be. He also willingly deferred to Durant and the rest of the offense in big moments (James Harden Game 5 vs. San Antonio, anyone?)

The point is, this is the category, along with defense, you knew coming in where Payton would best Westbrook. It's just the way each guy is made up individually. That gets back to their respective styles of play though, where Westbrook is that new age point guard that relies on initiating offense by himself to kickstart his entire team. It's not about only passing to other guys just to get them involved. It's also about attacking a defense from the start to get them on their heels, much like football teams have begun using deep passes to set up the run, rather than the other way around, which was how the sport was played for so many years.

Would Payton be ready for it?

Payton's calling card was his defense, so you know he wouldn't back down from Westbrook. He relished shutting down opposing team's best players and utilized that trash-talking nature to give him the edge. Westbrook's defense, on the other hand, has always toed the line between risky and reckless. Some of Westbrook's best defensive plays come from gambling and making that home run steal and finish on the other end. In fact, one of his signature plays not just from 2012, but his entire career, came from doing just that:

Look, Payton had more than his fair share of those types of plays, too, but it's worth noting that Westbrook has traditionally found ways to dial up his defense when it matters most. Sure, he hasn't done it nearly as consistently as Payton did throughout his career, but take a look at the playoff numbers from these respective seasons, and see how much closer these matchup gets:

To be fair, Payton's steal number is just lower, and Westbrook's isn't all that different, and a lot more goes into defense than just steals and blocks. Still, Westbrook averaged basically the same amount of steals in the 2012 playoffs as elite defender Gary Payton averaged in the '96 playoffs. That has to count for something. And those postseason numbers also bring something else to light worth mentioning.

Those old school guys love pointing out the way a guy like Westbrook hurts his team by trying to do too much and turning it over. Except Westbrook, despite a far higher usage rate (see next table of advanced stats), actually turned it over significantly less than Payton in his respective playoff run. That's something that is sure to surprise even Westbrook supporters, but once again goes a long way in illustrating the way Westbrook seems to dial in his game most effectively on the biggest stages.

So while the traditional numbers like shooting and assists lean slightly in Payton's favor, the idea that Westbrook is some out of control ballhog that would get taken to school by Payton may be somewhat overplayed. And just to really stress this whole new school thing, it's worth checking out the advanced metrics just to see how those stack up as well.

The first table is regular season and the second is postseason, and most of those stats just reiterate what we've already gone over. Payton's passing, defense and shooting efficiency trumps Westbrook's, not by a wide margin, but enough that Payton supporters could stand on numbers and have a pretty solid case. Except in one: PER.

It's hard to latch onto one advanced metric and claim it as best, because the idea of advanced metrics is to combine them to understand a player as a whole. Still, there's something about PER that seems to mean more. Check out the top players each and every year in that category, and they're almost always the very best the game has to offer. Westbrook supporters have always been able to turn to PER when all else fails. Yes the shooting numbers aren't ideal, yes the assist ratio, and the defensive rating aren't great, but check out PER, and there aren't many point guards who can touch him.

That's Westbrook in a nutshell. Look at his game in any traditional way, and you'll find enough flaws to make you wonder if he's really the guy that could win a championship for his team. But take every single thing that he does, most of which can't even really be explained - the relentless attacks, the out-of-nowhere rebounds, the pull-up-in-transition-jumpers that ooze with confidence, all these things that fuel his team, fuel the Thunder crowd, and lead to winning basketball, maybe not traditionally, but in 2014 - take all of that, and all of a sudden you have a player that would be a problem for anyone to guard.