Finland gets redemption, and other Group C action

Ukraine loses one of their biggest stars in the process. Meanwhile, Francisco Garcia shoots 73% for the Dominican Republic. Check out all of the details within!

Share All sharing options for: Finland gets redemption, and other Group C action

A mere 18 hours after getting their rumps handed to them by the United States, the Finnish Wolfpack were able to recover completely and pull out a victory over a strong Ukranian team. The story of the game may not come from the victors, though. Sergeii Gladyr went down in the first quarter when he landed badly on what appeared to be his ankle. Gladyr did not return, and Ukraine lost a serious offensive threat.

Ukraine responded in two ways. The first was to give more ballhandling responsibility to their bigs, and relying on more complicated offensive sets for scores. During the second quarter, they almost looked like the San Antonio Spurs with how efficiently they were carrying out such complicated plays. Of course, this style of play eventually led to problems. Finland runs a much smaller, quicker lineup than Ukraine does, so they were able to pick Ukraine's pocket and draw charges at crucial times.

Ukraine also gave a lot more responsibility to Pooh Jeter. After the game, I was able to ask Jeter how his role changed when Gladyr went out:

"Playing in China prepares me for whatever moment. I've always been that type of scoring point guard. Playing without Sergeii is tough. I know teams are going to focus on me more now that Sergeii is hurt. I just have to get ready. My job is to lead this team and do whatever I need to do."

Finland was crafty enough to crossmatch shooting guard Sasu Salin onto Jeter, knowing that he struggled against bigger matchups. Jeter wasn't able to get much on Salin, and really only succeeded in transition or when he was able to draw Finland's backup SG, Mikku Koivisto. That's not to take away anything from Jeter's instrumental part in Ukraine's late game run. After he checked in with 7:27 to go, Ukraine finished the game on a 24-16 run. Individually, Jeter recorded 9 points, 3 assists, and 2 defensive boards during that run. Before he checked in, Ukraine had failed to score a single point.

But really, this game was lost for Ukraine in the third quarter. After a strong first half in which both teams were able to space the floor with shooters, Finland decided to take the ball to the hole. Finland's shot charts from the second and third quarters pretty much tell the story, as the shift of emphasis was Ukraine's undoing. 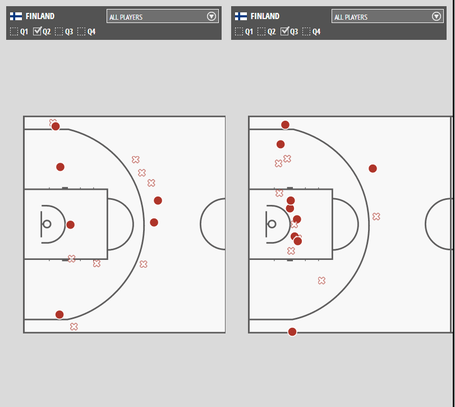 Simply put, once you get Ukraine's super slow big men to come out of the lane, it's really easy to roll to the hoop on them. Lots of high pick and rolls, that type of stuff. Ukraine could have gone to their zone, but with how well Finland was shooting the three, it would have been Basketball suicide.

Meanwhile, Ukraine was having trouble getting off shots. Without any real creator on the floor and Jeter neutralized, they only managed to score 4 points over the first 6:49 of the quarter. They would end up taking only 10 shots to Finland's 17 over the course of the third, despite solid rebounding. Mistakes and turnovers simply caught up to them.

The matchup was interesting from a historical point of view, because both of these countries have only really recently come onto the international basketball scene. This is the first FIBA World Cup for both teams, and neither have really fielded a team of interest up until the past couple of years. They can pretty much be attributed as success stories after FIBA Europe decided to expand the Eurobasket field from 16 to 24 teams back in 2011. Both of these countries got in because of that, and both found their own way to succeed. Finland did it behind a strong star player and ravenous fans, while Ukraine did it behind strong coaching and classical play. Neither of these teams figures to win the whole thing, but both have done a lo to generate basketball interest in their own countries and spread the game. So that's pretty cool.

New Zealand is a really strange team. There are times where you feel like they've got serious talent and should be able to outscore and outhustle almost anybody. Other times, they're endlessly bricking jumpers and not getting back in transition. That sentiment couldn't have been better expressed today, as they managed to shoot just 4 of 24 outside of the paint during the second and fourth quarters, while shooting 9 of 18 in the same areas during the first and third quarters.

You could also look at how they did individually. Thomas Abercrombie stepped out of nowhere and into an starting role before the game. He made the most of it during the first, scoring 13 of his team's first 15 points over the course of the first 6:46. Abercrombie would only take four more shots over the course of the entire rest of the game. Furthermore, New Zealand's two traditionally best scorers, Kirk Penney and Corey Webster, only managed to shoot a combined 8 of 26 from the floor. When neither of those players can shoot at least 40%, it's going to be a very long game for the Tall Blacks.

You can credit the intense pressure put on by the Dominicans. They only managed 11 turnovers over the course of the game, but they did a great job of staying home on shooters and forcing bad shots. The Dominicans can afford to let Mika Vukona get a few free points in the open lane, as long as they don't let threes reign. After all, New Zealand had 18 turnovers in their first game against Turkey, and that one was much closer.

On the Dominican side, Francisco Garcia was the man of the hour. He shot an astounding 73% from the floor enroute to a 29 point performance. Meanwhile, long-time mainstay Jack Michael Martinez was finally able to get his mid-range game going, Eluis Baez was able to pound the paint, and Victor Liz nailed a couple of floaters. There's definitely a lot of diverse offensive talent on this team, and they can beat just about any team in this tournament as long as they keep the ball moving.

What did you think of the other two Group C games? Can any of them beat Team USA? Who finishes where? Drop a comment and let us know!