The 2012 Thunder vs the 1996 Sonics has reached its inevitable destination in game 7, as OKC gets it done at home.

(WTLC and Sonics Rising's virtual clash between the '12 Thunder and the '96 Sonics continues. The Thunder staved off elimination on the road in Seattle and return to the 'Peake to make a final home stand. Can they take it to game 7?) 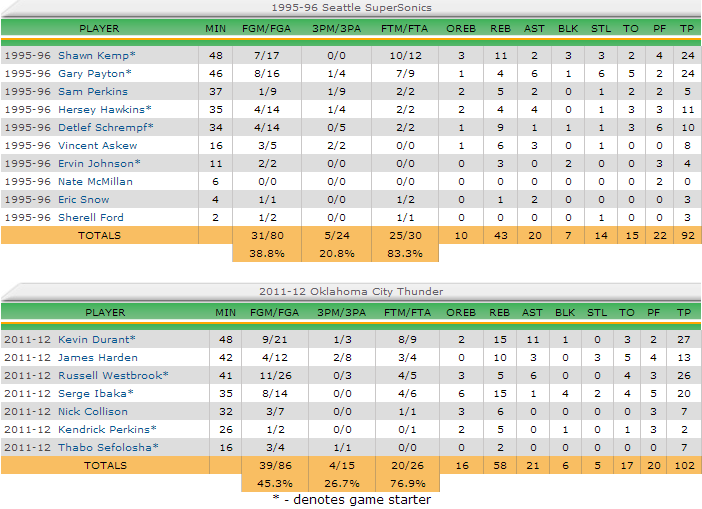 The Oklahoma City Thunder defeated the Seattle Supersonics in game 6 of our virtual series, 102-92. This was the most complete game the Thunder had played in the series in terms of the amount of effort and commitment kept in the game. Also, the aspect of teamwork was present on the court, as they totally deserved the win.

In the first quarter, the Thunder started strong and took control all over the quarter with an 11 points lead. However, in the second quarter, the Sonics started feeling comfortable on the floor, and somehow started coming back. In the third quarter, the Sonics were successful in achieving a comeback and were up by four points when the third quarter ended, 79-75. Moving on to the last quarter, the Thunder exploded and took control all over the game again to secure a comeback and extend the lead to come out victorious with a 102-92 win.

Sonics Rising: Is it slipping away? 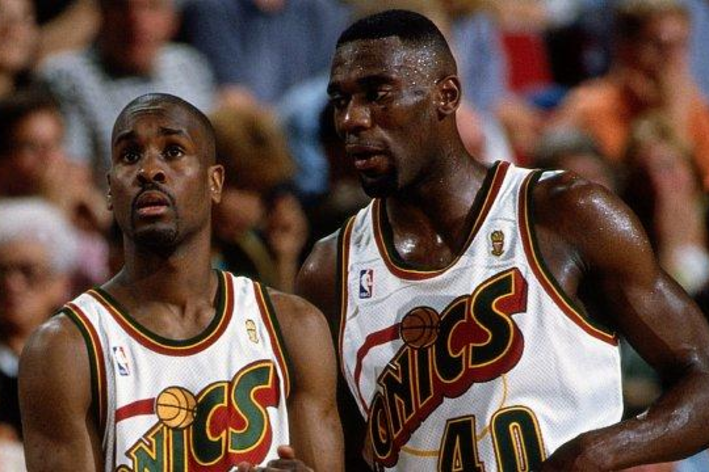 The Sonics once had a 3-1 advantage in this series, but the young Thunder responded like champs.

Kevin Durant: He was tremendous, and obviously man of the game. He recorded a triple-double, 27 points, 15 rebounds, 11 assists, while shooting 42% from the field, and 33.3% from the 3-point line.

Russell Westbrook: Although he struggled in his shooting, but his points were significant especially in the fourth quarter when Durant needed a support to comeback in the game. He scored 26 points, dished out 6 assists, and grabbed 5 rebounds while being -3 from behind the arc, and 11 out of 26 from the field.

James Harden: Harden was a successful sixth-man player in the game although he did not score a lot, and wasn't consistent in his shooting but he finished recording a double-double, 13 points, 3 assists, and 10 rebounds, while shooting 25% from deep, and 33% from the field.

Serge Ibaka: The Thunder did the correct job involving Ibaka more often in their offense. His numbers and value on the floor were remarkable, and he definitely did a great job defending Shawn Kemp. He ended recording a double-double by scoring 20 points and grabbing 15 rebounds, while shooting 57% from the field. He also had 4 blocks, 2 steals, and 1 assist.

Secondary Players: Players such as Perkins, Collison, and Sefolosha combined for 16 points.

That being said, four players ended scoring in double digits, and two players recorded a double-double. The Thunder finished shooting 45.3% from the field, and 26.7% from the 3-point line overall.

This game is one of the important games for the Thunder, as they will be heading to game 7 to end the series. Absolutely, this game should motivate them enough to make them ready for their final game in this series for the ages.