Another close game, but the young Thunder stayed together and avoided elimination... at least for now

(WTLC and Sonics Rising's virtual clash between the '12 Thunder and the '96 Sonics continues. The Thunder is on the brink of elimination. Can they find a way to bring the series back to OKC one more time?) 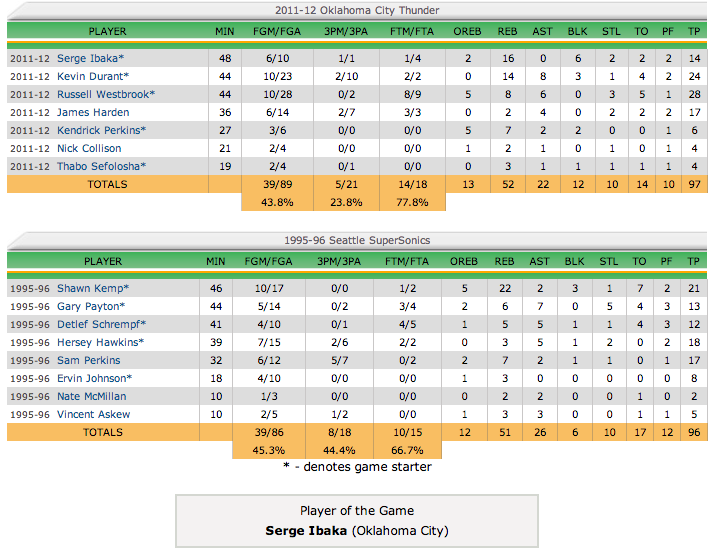 Ever since the Oklahoma City Thunder became good in Oklahoma City - so 2011 - they haven't done well in situations when they were down 3-1. In 2011, it was the Dallas Mavericks that knocked them out in Game 5 after three out of four hard-fought games didn't go the Thunder's way. In the 2012 NBA Finals, it was the Miami Heat that closed out the Thunder in Game 5, and in 2013, it was the Memphis Grizzlies that did the same. Both series also followed the similar pattern of OKC coming up just short in three of the first four, despite having a chance to win in pretty much every game. 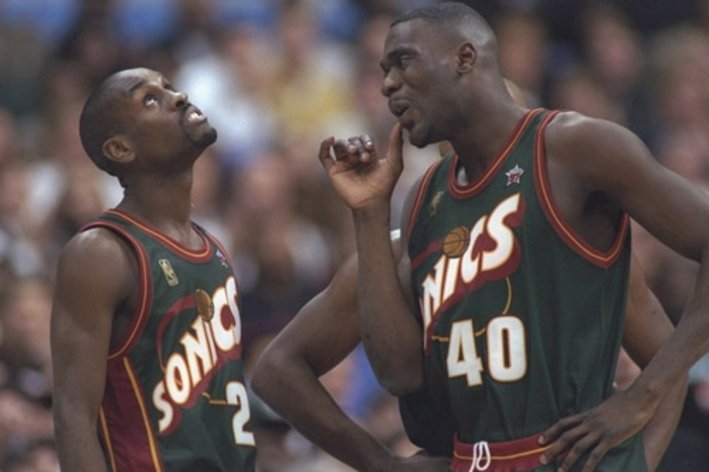 The Sonics had home court, they had momentum, but OKC figured out how to stay alive.

So here we have Game 5, with the Thunder seemingly on the ropes against the Seattle Supersonics, who are one knockout punch away from sealing their fate. Only, in a pleasant turn of events, this simulated 2012 version of the Thunder found a way to muster up the toughness to force another game.

Now, thanks to that effort, the series shifts back to Oklahoma City, where the Thunder can hope to ride whatever small bit of momentum they get from keeping the Sonics from hoisting the trophy in front of their raucous fans. The win also means that OKC, with a win on their home court, can force a Game 7.

Let's get down to the nitty gritty play-by-play. Unlike in the previous games when one team jumped out to an early lead, the first quarter was a back-and-forth affair that saw both teams trade baskets, with the biggest lead being just four at 16-12 in OKC's favor, before the Sonics closed on a 7-2 run to make it 19-18 Sonics after one.

The Thunder came alive in the second quarter, though where the youth and athleticism that has seemed so absent for stretches of this series was finally on full display.

It started with a James Harden jumper, it continued with a Kevin Durant 3-pointer, and then it became about the much-maligned Russell Westbrook doing what he always does, getting his nose in the middle of things and creating opportunities for his team.

You see, this series has been the perfect series for every "Westbrook shoots too much!" argument. Tonight's game was no different in that department, as Westbrook shot just 10/28 (36 percent) - which dropped his percentage for the series to just 37 percent.

Yet, all that argument does is ignores all of the other ways that Westbrook can impact a game. He's one of the best rebounding point guards the game has ever seen, and he showed that in the second quarter by corralling 3 offensive boards - all of which led to second-chance point for the Thunder. Two were putbacks for easy points, and the othe resulted in a reset which led to a 3-pointer from Durant.

Hustle plays like that ignite a team, and the Thunder seemed invigorated by it, as they began to put the clamps down on defense following the Westbrook rebounds. The game still went back and forth for the majority of the quarter, but with the Thunder sensing a opportunity, they went on a 15-4 run in the final three minutes to take an 8-point lead into the break.

From there, it became a matter of maintaining the lead, something the Thunder has always struggled with in big-time playoff games. But unlike in those contests when things stall, and they stop doing the little things teams need to do to win series against great opponents, they kept things buttoned up. They blocked shots, they rebounded the basketball, they took good shots, they got to the foul line. All of that kept them in the lead throughout the third quarter.

Of course, the fourth quarter started slowly for the Thunder, and all of those things went by the wayside once again. Durant started the quarter with three straight jumpshots, all missing the mark, and the Thunder didn't score for three-and-a-half minutes to start the fourth. The Sonics were far from lights out, but they chipped away, and took the lead back on a big-time 3-pointer from Sam Perkins with 8:40 to play.

That was the point when you began to worry about the Thunder. Here they were, once again, having played so well for so much of the game, having another golden opportunity to take a game, and a few mental lapses here, a few missed rotations there, and all of it was in jeopardy of washing away. The Sonics just kept executing and OKC found itself down 89-84 with 4:29 to play.

Inspiration comes from the strangest places, though.

After being a non-factor for pretty much this entire series - and his entire tenure LOLZ, jk luv u Perk - Kendrick Perkins made some plays. It started when he got the ball in the post, something you don't usually want in crunch time, but that's a different story for a different day. From there, he made the perfect read on a cutting Durant and found him with a brilliant pass, resulting in an easy two points for the Thunder. One possession game.

Reeling from the Perkins Offensive Renaissance, Westbrook took it upon himself to make a play on the other end, and picked the pocket of his nemesis, Gary Payton. In true Westbrook form, he stormed up the court, attempting to blow by every opponent, but wasn't able to finish the layup on the other end.

Only, through some sort of miracle, Perkins was there to gather the miss and tip it back in. One-point game. The Perkins Offensive Renaissance may have just saved the series for the Thunder.

A Sonics miss, a careless pass from KD, another Sonics miss, and there was Perkins again, gathering the rebound, settling the offense, and preparing them for one final charge to take the lead back that they had worked so hard to earn. With the offense now calm, the ball moved around and caught the Sonics defense out of position, ultimately ending up in the hands of James Harden. With the smoothest of 3-point strokes, The Beard made his mark, and the Thunder had their lead back, 91-89.

Sometimes that's all it takes. Things can get bleak, but a smart pass, an offensive rebound, and a defensive rebound, all from the most unlikely of guys on the floor, can turn things in a second. A 7-0 run sparked by Kendrick Perkins. No way the Thunder could squander that.

And it didn't stop there.

A Westbrook fadeaway meant the run was officially 9-0, but a 3-pointer on the other end had OKC up just 93-92 with 2:20 to play. At a point when every possession mattered, and no shot could go to waste, the ball found its way into the hand of - no I'm not kidding - Perkins once more. And - still not kidding - again, there he was to knock down the jumper.

There were still two minutes to play after the shot (or maybe The Shot?), but that was all it took, really. The Sonics were demoralized, having just been taken to the woodshed by Kendrick Perkins in crunchtime of a possible closeout game to the NBA Finals.

The record will show that Westbrook hit the final shot, and that Gary Payton and Hershey Hawkins both had chances to make legendary shots at the buzzer, but the hero will always be Kendrick Perkins, who used that veteran prowess that the Thunder front office is always quick to tout.

For one night, he sure made them look smart.

What was, overall, the main reason the Thunder won?

Enough about Perk, though. Let's talk about Serge Ibaka. For four games, he has been a floormat for Shawn Kemp to walk all over. In many ways, that continued tonight, as Kemp was on his way to yet another 20/20 game. But Ibaka clearly took it to heart just how much he had been manhandled, and found a way to have his own huge night on the boards.

The entire series has been a showcase for Ibaka the shotblocker, but Game 5 was a nice reminder that he can have quite the impact by just staying home and gathering misses, rather than trying to force a miss all on his own. That subtle shift changed the dynamic for the entire defense, and sent across that message of calm urgency. It was Ibaka's way of saying "let's not panic." So instead of helping off and going for blocks at every opportunity, he stayed home and banged bodies with Kemp. Sure, he lost his fair share of battles, as evidenced by Kemp's 22 boards, but he also won just enough.

That physical attitude rubbed off on guys like Perkins and, also, guys like Durant. I mentioned in the Game 2 recap how, when things get desperate, Durant always seems to step up his rebounding. That was the case once again, as he brought down 14 boards of his own.

That toughness and wilingness to get beat up is what sets teams apart in the playoffs, and those two, combined with Westbrook's high-flying acrobatics, set the tone on the glass and never let the Sonics feel like they were in total control.

Having said all of that, it was still just a 52-51 rebounding edge for the Thunder. So where did they excel? How about not turning the ball over, for starters. Turnovers come with the territory for a team as fast-paced and improvisational as the Thunder. Yet, they managed to keep that mostly under control as they turned it over just 14 times, and forced 17 of their own.

It's been talked about ad nauseum in regards to this team, but it bears repeating: so much of their success comes down to protecting the ball. They're going to force shots, but they are talented enough to get a way with it. It's in limiting the rest of the opportunities that come with dumb, unforced turnovers that can swing a game.

The Thunder has proven plenty of times that they can still win even if they are sloppy with the ball, so long as they take smart shots. They have also proven they can win if they take dumb shots, so long as they protect the ball. They just need to do at least one of the two, and they proved the latter to be true in Game 5.

That's really all there is to it. It becomes trite, it becomes repetitive hearing the same thing year after year, series after series, but in situations like this, it becomes about going one game at a time. OKC has a Game 6 at home, where they should feel confident. And if they can force a Game 7 from there, anything can happen.

So, to leave off on one more cliche, here's an actually pretty funny scene from an otherwise pretty terrible movie, because it captures everything the Thunder can hope to do from here:

Thunder Blunder: no one, really, but if we're picking nits, Nick Collison with just 4 points and 2 rebounds in 21 minutes