If the Thunder don't extend Reggie Jackson this summer, then they run the risk of making him the next Gordon Hayward or Eric Bledsoe.

As reported by the Oklahoman's Berry Tramel, the Oklahoma City Thunder are unlikely to reach an agreement on a contract extension for Reggie Jackson before the October 31st deadline. If they don't, then Jackson will play out next season on an expiring contract – the final year of his rookie scale contract, which will pay him $2.2 million.

What this means is that, come next summer, Jackson could be hitting the free agent market as a restricted free agent. The Thunder could negotiate a new contract with him then or extend a $3.2 million qualifying offer that will let them match any offer sheet Jackson signs with another club. So, going into the season with an extension doesn't signal the end of Jackson's time in Oklahoma City. But restricted free agency is a difficult game to play.

As a general rule, teams that can hammer out contract extensions with their rookie scale contract players after their third season sign their players for cheaper than teams that wait until the contract has expired to get a deal done. It's not hard to realize why – not only are teams getting a jump on their players' development arc, but they're also doing it away from the eager hands of other teams in restricted free agency.

Because most agents also realize that they can secure better contracts for their players after their rookie scale contract has expired, not many non-max players sign early extensions anymore. Only three of the eligible first round picks from the 2010 NBA Draft did so for less than the max last year (Derrick Favors, Larry Sanders and Quincy Pondexter), half as many of the 2009 draftees who signed non-max extensions in 2012 (Ty Lawson, Stephen Curry, Jrue Holiday, DeMar DeRozan, Taj Gibson and the Thunder's own Serge Ibaka).

Unsurprisingly, that list is littered with some of the most cost-effective contracts in the NBA right now. Teams that don't extend their rookie scale guys going into Year 4 are much more likely to pay up for it a year later.

Take Gordon Hayward for example, who was also eligible for an extension last season but failed to agree to terms with the Utah Jazz. According to this report posted by ESPN's Marc Stein last year, the Jazz were "ultimately hesitant" to offer more than $50 million over four years to Hayward, whom "was not seeking the four-year max."

Fast forward to this summer, and now Hayward is signed for $63 million over the same four years. The Charlotte Hornets signed him to a max offer sheet, which the Jazz matched in the end. Waiting an extra year to get a more firm idea of what Hayward can offer on the court is understandable to a degree, but it cost the Jazz an extra $13 million over the $50 million mark they stopped at last year.

Also of note is Eric Bledsoe of the Phoenix Suns. In another report from Stein last year, it was reported that Bledsoe was seeking "at least $10 million annually" in his third year extension. Of course, Bledsoe had been a career back-up to Chris Paul at that point, so the Suns decided to hold off. Today, Bledsoe is still unsigned – having turned down a $48 million, four year contract offer from the Suns ($12 million annually!) and reportedly seeking the $80 million, five year 'Designated Player' max contract. Words like 'irreparable' and 'soured' have been thrown around to describe the relationship between player and team lately, with the Suns now discussing trade possilibities. 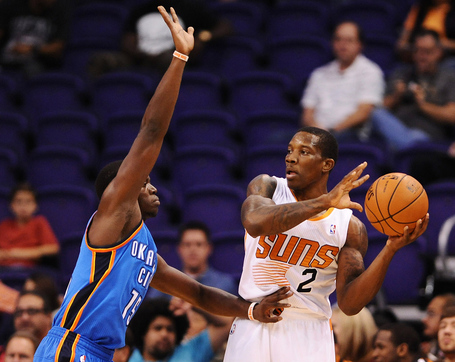 In a way, Reggie Jackson's career arc has followed Bledsoe's so far. He's been a career back-up to Russell Westbrook, and though no one's denying Jackson's talent, putting a firm money value on Jackson is hard. The Thunder will only be willing to offer so much money to one player after what they're paying Kevin Durant, Russell Westbrook and Serge Ibaka, and also, you can be sure Jackson's agent knows that the best career move for Jackson is to be plucked away in restricted free agency to be the starter for some other team.

Provided Jackson doesn't collapse Larry Sanders-style in his fourth season, retaining him could become even trickier. And much more likely than Jackson falling on his face is that he continues to improve and cements himself further as a starting-caliber player in the NBA. Just like Bledsoe last year, Jackson could reasonably be looking for something like $10 million per year or more right now, and just like Bledsoe now, he could be worth something substantially greater than that next year. If some team plays the Hornets to Jackson's Hayward, the Thunder may not be so eager to be the Jazz.

Kendrick Perkins' wasteland of a contract expires after next season, as does Nick Collison's much friendlier deal, but flexibility is an even more prized asset than usual with a certain few very important contracts expiring in 2016 and 2017. Signing Jackson now would've been the best way to keep his cap hit low in advance of Durant hitting free agency in 2016 and Westbrook and Ibaka doing so in 2017.

However, the concern isn't keeping his cap hit low as much as it is keeping it low enough. The salary cap and luxury tax thresholds are on the rise, but forecasting the team's financial future into 2016 can be tricky right now and they'd hate to do something now that would tie their hands later on, especially if that something is "keeping Jackson and losing Durant or Westbrook."

Waiting means the Thunder can make a decision with a clearer idea of their own financial situation, and that may be worth letting him go unsigned now. But it's a gamble – when Jackson hits restricted free agency, he gains some control over the situation, and it introduces other teams to the mix. If he signs an offer sheet elsewhere, the Thunder will have to judge carefully whether matching is in their best interest. Can they pay Jackson and keep their superstars? As profitable as this team is, they've always been shy of the luxury tax and it'll be in the back of everyone's heads with the summers of 2016 and 2017 looming.

What we have here isn't unlike the James Harden scenario from 2012, although the Thunder were playing with a bigger fish then. Jackson probably isn't looking for the max, but if the Thunder aren't willing to sign him, then a trade may be in the cards sooner or later. The Thunder don't want to be left empty-handed if Jackson leaves next year.

In terms of basketball sense, a trade may not be that bad of an outcome for the Thunder. While Jackson's been able to produce alongside Westbrook, there is an overlap in their skillsets and neither plays all that well off the ball. Seeking a more natural fit, like a three-point shooting swingman, isn't a terrible idea as long as they can get a fair return. *coughIstillwantAfflalocough*

At this point in time, there are a lot of variables in play, and there's plenty of ways that the Thunder can handle this situation for a satisfactory outcome. But they have to be careful. Jackson is a major cog of the team, occupying his own tier in the team's hierarchy beneath the three superstars. Plus, he is a close friend of Durant, and he proved his mettle n in the playoffs last year when he essentially saved the Thunder from a meeting a disastrous 1st round exit. Mishandling this situation could mean losing Jackson, or even worse, losing one of the three superstars above him in the pecking order.

How Jackson performs in this upcoming season and what he will command in free agency will be a major subplot of the Thunder's season. Restricted free agency is always a dangerous game, but for the Thunder who are playing with big pieces and building towards the ultimate goal of a championship, the stakes are even higher.

Will the Thunder re-sign Reggie Jackson?