Thunder film room: breaking down the problems with OKC's pick and roll offense

OKC has been a top 10 offense for five years in a row. But there's a dirty little secret that may be keeping them from being even better: they don't screen very well.

Share All sharing options for: Thunder film room: breaking down the problems with OKC's pick and roll offense

OKC has a good offense. The Kevin Durant/Russell Westbrook tandem is unlike any other duo on the offensive end. When two players can combine for 50 points on any given night, not much has to be made up for in any other aspect.

Well, that's what the Thunder seem to think.

Scott Brooks is a fine coach. He's led the Thunder to a Western Conference Final and numerous late playoff rounds. But us critical writers tend to bust Brooks for one specific reason: he lacks offensive creativity. While the Thunder are a highly efficient offense--ranking 5th in the league with 106.2 points per game--too often plays result in KD 1-on-1s or Russell Westbrook chucks. It's not as if the plays aren't called. It's that OKC fails to execute properly. While the Thunder has consistently overcome this lack of execution time and again, the 2014 San Antonio Spurs proved this past season that you need a completely well-rounded and executing offense to succeed at the ultimate levels of competition.

For years now, OKC has been a perennial Finals contender, but they've still yet to win it all. In that time, it has become clear that--as good as OKC's offense is--they can't and won't win an NBA Championship until they excel in those more subtle elements of the game like those Spurs. It just so happens, there is one element that needs improvement on offense that may surprise some people but, if solved, could go on a long way in finally pushing OKC over the hump: screen-setting.

Does screen-setting matter? Take a look at what Portland Trail Blazers point guard Damian Lillard had to say:

[The Spurs] screens hurt. They actually set real screens. They do a great job of setting and holding screens. It wears you down. Chasing Tony Parker is one thing. Getting hit every single time is another thing. It takes a toll on you.

This weakness in offensive execution didn't hinder the Thunder too much in the regular season, as they finished with the second-best record in the heavily-talented Western Conference. However, once the playoffs came around and the opponents became more rigorous, it had KD and the team on the brink of elimination quite a few times.

A big reason for the struggles lie in the pick-and-roll offense. While the pick-and-roll has been a strength for some Thunder players, it was a weakness for a plenty of others. Maybe it was due to laziness, maybe it was not stressed enough in practice. Whatever it was, it wasn't enough to overcome a far more disciplined opponent.

Let's take a look at how these struggles manifest.

Serge Ibaka is a legitimate threat on offense as he can roll to the rim as well as pop out for the mid-range jumper. What would add another weapon to Ibaka's offense would be if he learned a thing or two from Kendrick Perkins. Perkins is in the game for two bold reasons: to be a big body in the paint, and set hard screens. Ibaka, on the other hand, gives weak screens.

In this clip, you can see that Ibaka's failure to provide a good screen leaves Kevin Durant without any real options and he dribbles into a double-team. Ibaka goes to set a pick on Danny Green then pops out around the top of the key. Durant drives to the lane as if he's already decided he is going to score. Without even thinking, he chucks up the contested shot where he is double-teamed by Green and Tim Duncan.

Creds to KD for pulling Ibaka's man into the paint with the drive, but a better screen would have either given Durant more space to score.

Again, Serge is the culprit.

Here, Reggie Jackson gets the pass from Westbrook where he awaits a pick. Ibaka runs up and gives a grandma screen on Jackson's man. But then he rolls to the basket, giving Reggie the opportunity to attract Tim Duncan by driving and dishing. Nope. Just like KD in the previous clip, he tries to be Superman with his circus shot while Serge is standing without anyone guarding him.

Sure, it's poor shot selection by Jackson with an open Serge trailing behind, but the screen from Ibaka didn't exactly do much to move Jackson's defender and made it difficult to see over Duncan. A harder screen opens up that much more, and makes pocket passes easier to complete, as opposed to forcing a layup.

After all this "busting of Ibaka's chops", would it be horrible for me to say, he's gotten by OKAY in pick-and-roll situations. Not because of his deathly hits, but because of his freakish qualities and his exceptional athleticism.

Despite the minimal contact, Ibaka uses his speed and athleticism to slip and convert a dunk. But these tactics won't suffice against clever opponents like the Spurs. Which is why it didn't in the Western Conference Finals.

Don't get down on yourself yet.

According to Sport VU data, OKC is not such a horrible team in PnR situations when Perkins and Nick Collison are on the floor. They are actually quite efficient. 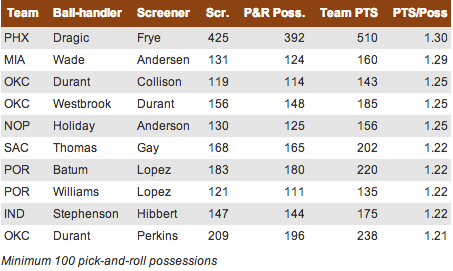 The Thunder big men are solid pick and roll guys for the most part. Nick Collison loves getting his hands dirty.  Perkins is enormous. Mitch McGary can be a PnR force with his extended shooting range and big frame. Steven Adams is freakishly big and is a physical guy. Now Serge must incorporate his body. He's got the speed and shot, how about the hit?

Putting fear in the opponent would make the Thunder a much more dynamic offense, and would take them to new heights as a team.

Most NBA fans would think that Kevin Durant has a perfect offensive skill set. He can shoot, he can drive, attract fouls, pass. And while his PnR offense is above average with certain screeners, it is far from a consistent threat.

Before you even acknowledge the execution, take a look at the shot clock. By the time KD takes the shot, there is plenty of time to kick the ball out and start a new play. But Durant feels that he needs to score, so he goes ahead and chucks up the shot without looking at any other options.

In this next clip, Perkins gives an excellent screen, allowing KD to drive. But instead of looking for Kendrick cutting, he pulls up for the contested shot. If a simple pass was made, Perkins would have been able to convert his layup into 2 points.

Learning how to perfectly execute the pick and roll will be a great thing for OKC. It will result in more points scored and a more fluent offense. With the right shot choices and passes, a failure of a season could have been a successful one. All the team needs is patience and practice.