The Thunder could not counter the Sonics down the stretch and face elimination, down 3-1.

(WTLC and Sonics Rising's virtual clash between the '12 Thunder and the '96 Sonics rages on. The Sonics stole home court advantage back from OKC; do the Thunder have what it takes to bounce back?.) 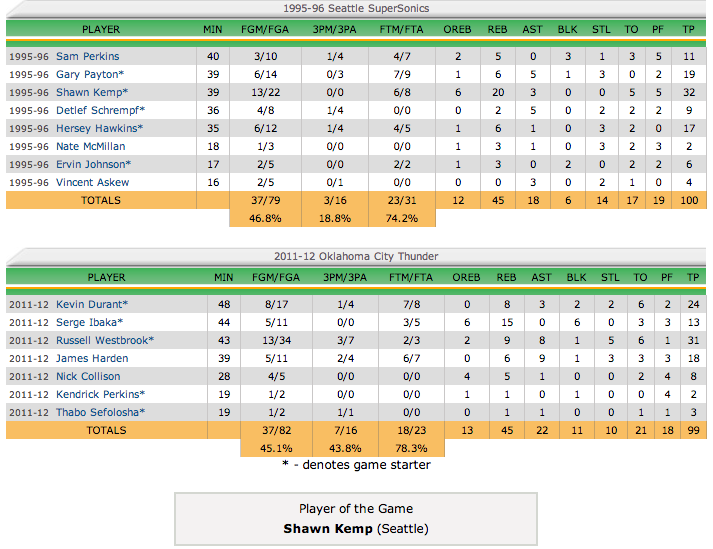 The 2012 Oklahoma City Thunder dropped their 2nd consecutive game at home to the 1996 Seattle Sonics, 100-99 and are now a game from elimination, trailing in the series, 3-1. The Thunder had appeared to have finally thrown off the Sonics' defensive shackles, exploding out of the gate and producing 35 points in the 1st quarter, giving us a sense of hope that their offense had finally found itself.

The remainder of the game turned into a grind it out affair once again, as the Sonics slowed things down and refused to let the Thunder's lethal fast break get going. OKC seemed to have a good game plan put together, willing to let Shawn Kemp have his way on the inside and not let anyone else get going. Only shooting guard Hersey Hawkins had any sort of efficient game, and the plan gave the Thunder a 7 point lead midway through the 4th at 93-86.

However, once again the Thunder's late game offense was their undoing. They only managed 6 points the rest of the way, all of which came on free throws. Furthermore, even when OKC go to the FT line, they did not capitalize. James Harden, Kevin Durant, and Russell Westbrook all missed free throws, which would have given the Thunder a 2 possession lead as the quarter wound down. Instead, the Sonics had an improbable chance to win it in the end, as Gary Payton ran a simple handoff play with Shawn Kemp in transition after a long Westbrook miss, which gave Seattle a 1 point lead, 100-99.

Sonics Rising: Got 'em right where they want 'em 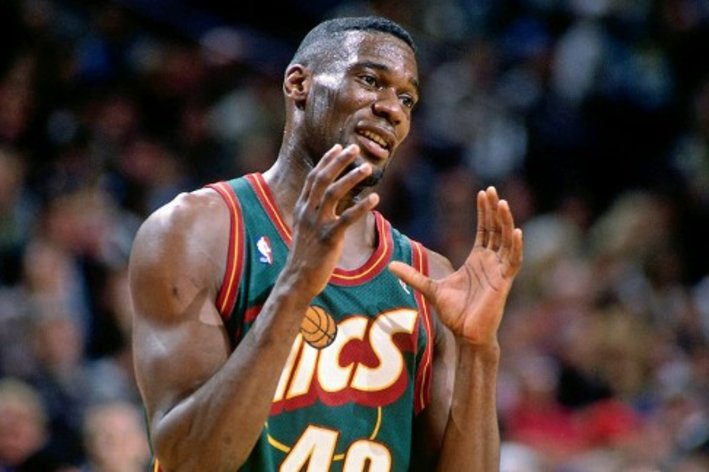 The Sonics should not have won game 4, but key plays from Kemp and Payton led to the improbable comeback and a 3-1 series lead.

The Thunder had a shot to win it in the end, and even ran a variation of their favorite staggered screen play for Kevin Durant to make it happen. As Durant came around the top of the key off of screens from Serge Ibaka and Kendrick Perkins, Thabo Sefolosha fed the high post to Ibaka. Sefolosha set a backpick on Gary Payton, who could not recover on the left sideline as Westbrook slid into the open space. Ibaka's pass was a little low, but Westbrook had plenty of time to catch, set his feet, and shoot an uncontested 15 footer.

The Thunder were led by Westbrook, who finished with 31 points along with 9 rebounds and 8 assists, but he needed 34 shots to get there. Durant had a more efficient shooting night, but still finished well below his scoring average, shooting 8-17 for 24 points. The Thunder's bench was led by James Harden who finished with an impactful 18-6-9, but once again he was not on the court when his offense would have mattered the most.

Shawn Kemp continued his assault by posting a video game-like 32-20.

The game was there for the taking. OKC did what it needed to do through 3.5 quarters. Even though they surrendered most of their double-digit lead in the 1st half, through the first 18 minutes of the 2nd half they played extremely confidently. They knew that they weren't going to slow down Kemp, so they worked diligently to cut the percentages of everyone else, and it should have been enough.

What eventually did the Thunder in was poor execution in the final 5 minutes of the game. We thought we had seen the last of this in 2011 against the Mavericks, but here it was, once again, where OKC could not get into any sort of set offense to give themselves open looks. Durant did not get a look at the rim after his free throws with 3 minutes remaining, and was rendered a non-factor when all it would have taken was 1 more made shot to take this game.

Westbrook played aggressively but ran hot and cold for most of the night. It was his assertiveness in the 3rd quarter that pushed the Thunder into the lead, but a few early made jump shots may have been his undoing. Instead of attacking the rim as he had done earlier in the series, Westbrook settled for jumpers most of the night. As a result, he only managed jumpers during crunch time and only went to the free throw line 3 times the entire game. He clearly showed that he can stand toe to toe with Payton, but he could not capitalize on it in the end.

The Thunder know that the Sonics aren't going to hurt them on the outside, as Seattle only shot 3-16 from 3-point range. However, once again they could not adjust their defense accordingly and allowed Kemp into the lane at will for 32 points on 22 shots.

Furthermore, the visiting Sonics were the offensive aggressors on the night, working their way to the FT line 8 more times overall. Much of this can be laid at Westbrook's feet, who with 34 shot attempts on the night, many of which were jumpers, disallowed the Thunder to produce their normal allotment of points at the charity stripe.

This is it, unfortunately. The Thunder dropped both of their home games to the visitors, and now must return to the Key Arena and face the Seattle-ites who have been waiting for this moment for a very long time. OKC also must do so knowing that Durant has yet to play anything close to a complete game. Glass have empty says that maybe the Sonics have solved KD and he's not going to erupt any time soon. Glass half full says, it's bound to happen soon.