The scrimmage between Team USA ended after Paul George fractured his leg going up for a block.

In what was supposed to be a light-hearted, easy going scrimmage between the two halves of Team USA, a tragic moment suddenly became surreal reality.  Paul George, while going up for a block on a fast break, landed awkwardly against the basket's backstop and suffered a serious fracture to his leg. 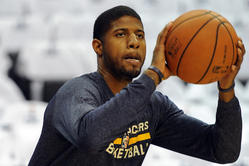 Our cohorts at Indy Cornrows provide 1st person perspective of what it was like in the immediate aftermath following George's shocking injury.

Everyone was in shock once they saw the collision, except for Paul George himself.  The man kept a straight face and handled the situation in a calm manner.  Without a flinch.  Coach Krzyzewzski called off the rest of the game after George was taken off the court.

In a statement released after surgery was completed, USA Basketball confirmed George suffered an open tibia-fibula fracture and is expected to remain hospitalized for about three days. Dr. Riley Williams, a Team USA orthopedist who also works with the Brooklyn Nets, was with George.

Sources close to the situation told ESPN that while there didn't appear to be additional damage besides the fractures, doctors believe George likely will miss all of next season, though no official prognosis has been given.

Paul George is on his way to becoming a top 5 talent in the NBA.  He is already a 2 time All Star, Most Improved Player, 1st Team All Defense, 2nd Team All Defense, and 3rd Team All-NBA at just 24 years old.  George has showed improvement as each season progressed and lead the Indiana Pacers to two Eastern Conference Finals appearances.

It was a shame that such a fun and spirited event turned sour because of this.  Welcome to Loud City would like to send their prayers out to Paul George and we wish him a speedy recovery.  #PrayforPaul

Thanks everybody for the love and support.. I'll be ok and be back better than ever!!! Love y'all!! #YoungTrece