The Thunder surrendered home court advantage back to the Sonics when they couldn't generate enough offense in OT and fell to Seattle in game 3.

(WTLC and Sonics Rising's virtual clash between the '12 Thunder and the '96 Sonics rages on. With the series knotted at 1-1, the series arrives in OKC. Here is what happened.) 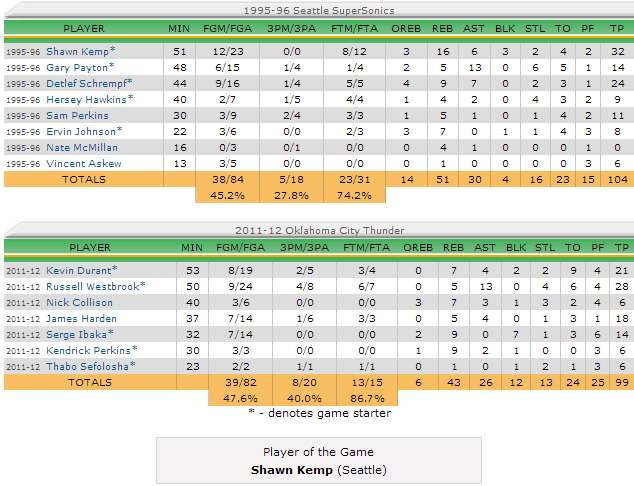 The 2012 Oklahoma City Thunder dropped game 3 to the 1996 Sonics in overtime, 104-99. The Thunder had put themselves in  a position to win this pivotal game 3 and take a 2-1 lead in the series by coming back from 6 points down late in the 4th quarter to actually take a 2 point lead with 12 seconds remaining at 95-93. Fueled by Kevin Durant and Russell Westbrook, the Thunder had seemed to find a way to hang on and win in the end.

However, the Sonics ran a slick high pick and roll play, inverting Gary Payton and Shawn Kemp so that Kemp was the ball initiator on the play with Payton setting the pick on Nick Collison. Westbrook was caught in no-man's land, not wanting to leave Payton but unsure how to stop Kemp coming off of the screen, and Kemp easily got to the rim dropped in the layup as regulation expired. 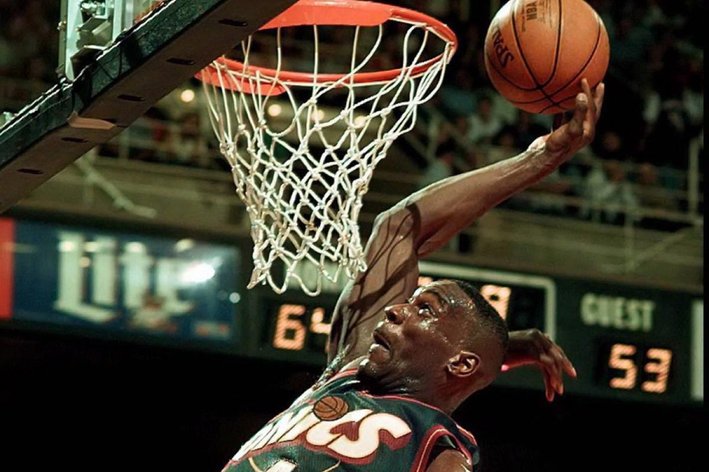 The Sonics regained control of the series and Kemp is a problem OKC has yet to solve.

Even with the letdown at the end of the 4th, the Thunder appeared to be in good condition to overtake the Sonics when OKC's old habits resurfaced at the worst time possible. Durant had trouble getting any kind of position against Detlef Schrempf and was unable to even catch the ball in scoring position. As a result, he did not get a single shot or free throw attempt in the OT period. Aside from 2 early baskets by Kendrick Perkins, who held his own against the Sonics' Ervin Johnson, the Thunder were not able to generate a single point over the final 3:45 of the extra period.

The Thunder were led by Westbrook, who finished with 28 points and 13 assists, but committed 6 turnovers in the process. Meanwhile, Durant has continued to struggle to make his mark on a series where he should have had a decided advantage against the slower Schrempf. Durant finished only 21 points and committed a staggering 9 turnovers.

On the other end, Kemp once again proved he's the best player in this series, totaling 32 points, 16 rebounds, 6 assists, 3 blocks, and 2 steals. Schrempf outplayed his more renowned Thunder counterpart by recording 24 points, 9 rebounds, and 7 assists.

The Thunder showed admirable quality making the hard push at the end of regulation. After trailing for most of the game and seeing Durant underperform for most of the night, they needed some energy, and Westbrook and future 6th man of the year James Harden provided it. In the 4th, Westbrook finished with 7 points and 3 assists, while Harden scored 9 of his 18 points in the game.

However, the Thunder's undoing were familiar old friends.

1) Why was Harden pulled with 3:45 left to go in the 4th, never to return? Obviously Scott Brooks often likes to go to defense over offense in close games, but there is little evidence that the Sonics were hurting OKC from the perimeter in the 4th. SG Hersey Hawkins did not make a FG in the 4th, and the only thing that may have contributed to Harden getting pulled was that he lost Hawkins on a PnR switch which pulled Serge Ibaka out of position, leading to Ibaka's 6th foul in the game. Other than that, it is difficult to justify why OKC would have switched to a defense-over-offense mentality, especially since they would need to insulate themselves from too much ISO play down the stretch.

2) A familiar scene in OT. We've seen this too many times over the past two years. Kevin Durant allows himself to be taken out of games because he cannot hold post position against smart defenders. Instead of moving or initiating the offense, he becomes passive, waiting on the passes that may never come. As a result, Westbrook is put into a situation where he has to create on his own, and did not make a shot in OT (0-5) and did not have a FT or an assist.

It is difficult not to come to the conclusion that Harden's absence on the court hurt OKC far more than Sefolosha's defense helped, especially because the Sonics are feasting on the Thunder's front line. Perkins is too slow and Ibaka is too reactionary at this point, and Kemp is destroying both of them. The use of Nick Collison helps some, but the Thunder have to be willing to cede that they are soft in the middle against Kemp and instead of trying to guard the perimeter tightly, which is not the Sonics' strength, they need to be exploiting matchups. Hawkins cannot guard Harden, and without Harden as a 3rd ball-handling scorer out there, Durant's game is inert and Westbrook simply has no options to turn to.

The Sonics defense is unlike anything OKC has seen in the Western Conference. While LeBron James' Heat rivals it in terms of aggression, Seattle's is too athletic, smart, and disruptive to play passively.

Unfortunately, that is what Durant has turned into through 3 games. While he has yet to revert to too many 3-point attempts in the game (only 5 in game 3), a player who should be nearly unguardable has become guardable because he is not making the Sonics defense work. Schrempf should not be able to contend with Durant's quickness, but too often the Thunder have created play sets that have had poor spacing so that a) Durant has no room to drive; and b) has bad passing angles, which helped contribute to his game-high 9 turnovers.

If Durant cannot put his fingerprint on this series, the Sonics will never have to adjust their defensive schemes. They can leave an aging Schrempf on him for most of the affair and never have to change up how they deploy Payton on the perimeter. He's the runner up to the MVP; it's time to play like it.

The Sonics' clear advantage in the paint is manifesting in a major way. The Thunder simply have no answer for Shawn Kemp, as he is getting into the lane with ease and staying there as long as he pleases with superior strength and quickness. He once again shot over 50%, got to the FT line 12 times, and managed to foul out the Thunder's best interior defender in Ibaka on his way to a 32 and 16.

The Thunder never like to make defensive adjustments, but so far Seattle is not hurting them significantly anywhere other than Kemp and Payton, which of course is not that surprising. There are defensive switches they can make on Payton, but something more significant is going to be necessary to slow down Kemp. What gives most concern is he is equally comfortable spinning into the lane or fading to the baseline for an easy 18 footer. Perhaps the latter is the better option, because then at the very least he's not in position to grab an offensive rebound.

Aside from that, 15 turnovers between Durant & Westbrook is not going to get the job done. We know that some turnovers are going to be the byproduct of the pair's aggression, but that's the problem. Durant isn't playing aggressive. He's playing passive, holding and dribbling the ball for too long, and Seattle is taking what they please. Scott Brooks needs to put Durant in better position to make easier reads where he only has to worry about 1-2 defenders instead of all 5. OKC needs their best player to play like one if they are going to even this series.

Losing game 3 and home court is not the end of the world, but the way the OT played itself out does remind us a bit of 2011 vs the Mavericks in the WCF. If Durant isn't going to play to his full strengths, Westbrook is not going to wait for him.

Meanwhile, OKC has to realize that Harden may be their only competitive advantage left in this series, so if that means putting the ball in his hands 15 times in the 4th the way they did against Dallas in 2012's close-out game 4, that is no terrible thing.

It isn't time to panic yet. Well, maybe a little bit.