The "New" Cavaliers, and how the Thunder match up

Cleveland is on top once again. Can the Thunder adjust to his super team?

Share All sharing options for: The "New" Cavaliers, and how the Thunder match up

News broke recently that Kevin Love will be joining arms with LeBron James and Kyrie Irving in Cleveland to round off the best team the NBA has seen since...I don't even know...

Yahoo's Adrian Wojnarowski then reported that there was a "wink-wink" agreement that Love would agree to a long-term, big money extension at the end of the year, something he can't legally do until the season ends due to tampering rules. Still, with the unspoken agreement in place, it appears Love will be in Ohio for years to come. Then, LeBron James told the audience at his homecoming rally, "I'm not going anywhere."  Simply put, this new Cavs team will be around for a while.

What does this mean for the Thunder? Everything. In 2012, OKC couldn't contain the Miami Heat. Now they may face an upgrade at power forward (Love over Bosh) and an even more lethal front court (Irving and Waiters over Chalmers and Wade). It will be a true testament to Kevin Durant's will power to lead and compete, because taking down this monstrous roster will be no easy task.

The Pick and Pop/Drive and Kick Demolition

Kevin Love is easily the most well-rounded offensive big man in the game. No other power forward has a variety of post moves to accompany a deadly long range shot--on top of above-average passing skills and offensive rebounding. LeBron James is no offensive joke either. We know that he can shoot, pass, rebound, screen and roll. What will eventually become his most lethal move is his drive and kick. In Miami, LeBron had the privelege to work with a solid big man shooter in Chris Bosh--something he didn't have in Cleveland. James and Bosh connected on numerous pick and pops, drive and kicks, and even just spot up jumpers. 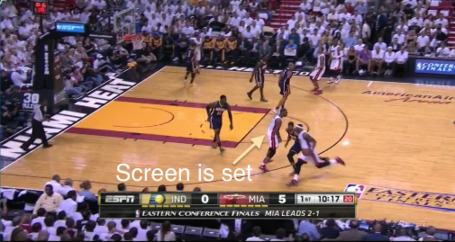 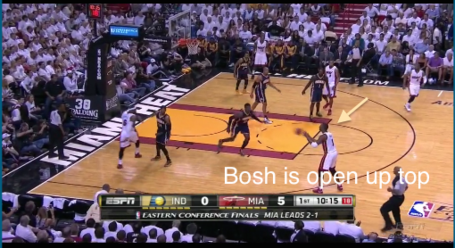 If it works for Chris Bosh, it will work with Kevin Love--who converted 37.6 percent of his threes last season. Kyrie Irving has the potential to run the pick and pop well, except we have yet to see it due to his lack of shooting bigs. It works with Dirk Nowitzki and whatever point guard he is assigned at the time (Jason Kidd, Jose Calderon, or Jason Terry), so why can't it work with Love and Kyrie or Love and LeBron, or even Kyrie and LeBron?

The point: the pick and pop is a difficult play to defend. As is the drive and kick. On defense, when Serge Ibaka is on Love, he must keep an eye on the screener and the handler because while Love can knock down a three, he can also pull a post move or a mid range jumper off the roll. Ibaka will have to get better at defending the perimeter, especially now that they may face Love on a bigger stage than a meaningless Timberwolves game.

Rookie coach David Blatt will be using his Princeton brain to create an open floor using a variety of tactics.

Pair LeBron James up with three phenomenal three-point shooters in one starting lineup (Irving, Waiters, Love), then add a bench consisting of notorious long range bombers like Mike Miller, James Jones and potentially Ray Allen and Shawn Marion is something no team wants to encounter. These veteran shooters will not only knock down much-needed shots, they will also space the floor, leaving more room for Kyrie or LeBron to drive. When James was paired up with Miller, Allen and Jones in Miami, it concluded with the best season of his career.

The Thunder struggled with defense toward the end of last season. Now with Thabo Sefolosha in Atlanta, a significant part of OKC's perimeter defense is gone. This puts loads of pressure on Andre Roberson for one thing. Roberson seems to be developing into the second coming of Thabo--defensive wise. Roberson will be paired up with players like Mike Miller, Dion Waiters and potentially Ray Allen. OKC needs the young second-year guard's defensive chops more than ever now. Ibaka will also need to improve his perimeter defense because when Cleveland plays OKC, they will keep Love on the outside in order to avoid Ibaka down low. Kendrick Perkins will have to step up his help defense as well.

On the offensive side of the ball, the Cavaliers appear unstoppable. Defensively... not so much. The Cavs will be winning games on offense but will struggle with defense. The team lacks a true rim protector, Kevin Love cannot protect the rim in any light. Anderson Varejao is too consistently injured to make a legitimate impact and Tristan Thompson is no specialist either. This is where Serge Ibaka can win the battle. Kevin Love tends to allow easy shots in the paint, but when he's guarding the ball outside, he's not as bad as people advertise. Luckily, Ibaka can dominate in the paint. This lack of rim protection doesn't matter only for Serge. Love, on his end, allowed an average of 57 percent on shots at the rim, according to Sport VU data, something opponents will certainly look to exploit. Russell Westbrook and Kevin Durant must take advantage of the open rim., because horrifying is not a harsh enough word to explain Love's help defense/rim protection.

The problem extends to the perimeter. While Kyrie Irving is an outstanding offensive player, he is known to be an atrocious defender, ranking 72nd among point guards in defensive RPM.

Other guards--Dion Waiters, James Jones, Matthew Dellavedova--are not defensive prototypes, making the Andrew Wiggins trade a bit more questionable due to his superior perimeter defense. Shawn Marion has shown interest in joining Cleveland. While his old age may be a problem, Marion is a great defender and would help a lost cause in Ohio.

Facing this Cleveland team may be the hardest challenge KD and his Thunder have encountered. But if Scott Brooks takes advantage of their minimal weaknesses, OKC may take down this intimidating team.