WTLC and Sonics Rising kicked off this series between the '12 Thunder and the '96 Sonics after a week long of player breakdowns.  Now it's time to see how these teams match up in a game situation.  Here is how they played in a simulation of game one. 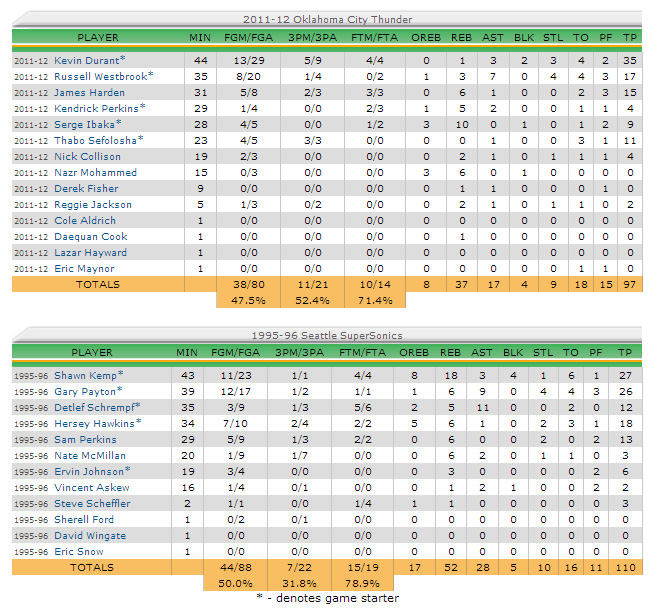 The 1996 Sonics took down the 2012 Thunder in game 1, 110-97.  It was like any ordinary night in 1996: Gary Payton and Shawn Kemp simply dominated.  Kemp decimated Serge Ibaka, scoring a team high--27 points--while recording an outstanding night on the boards with 18 rebounds.  A phenomenal effort by Reign Man.  His counterpart--Gary Payton--was nearly as dominant with 26 points, 9 assists, and 6 rebounds.  Kevin Durant had a solid scoring night with 35 points, yet struggled a bit with his shooting percentage.  No other Thunder player had a great night.

The game started off well for OKC, when they got out to an early 10-2 lead with Thabo Sefolosha leading the way.  Thabo had 8 of the team's 10 points in just 2 minutes.  Hersey Hawkins had his hand in Sefolosha's face, yet he was making fadeaway acrobatic threes.  Shawn Kemp struggled with turnovers early on, but was quick to redeem his troubles with rebounding and scoring.  The rest of the 1st quarter carried on with Gary Payton, Hawkins, Kemp, and Ervin Johnson carrying the load offensively.  However, the Thunder remained on top throughout it all.  Serge Ibaka was having struggle with Kemp, finding it hard to keep him from getting to the rim.  With 2 seconds remaining, Kevin Durant knocked down a 3 pointer to extend the lead to 8 points.  Gary Payton came back with a buzzer beater bank shot, showing KD that the game was not going to be a walk in the park.

The second quarter started off with 4 three pointers in a row--one from Hawkins, one from James Harden, one from Sefolosha, and one from Nate McMillan.  The Thunder however found trouble scoring as the Sonics cleaned up their act.  Reign Man was scoring all over Ibaka and Payton was making his defensive impact clear.  Kemp was exposing Ibaka's rim protection and made him look like a toy out there.  The Sonics finished the half with a strong recovery and a 2 point lead.

The third quarter was the turnaround for Seattle, as Detlef Schrempf found a rhythm, and Gary Payton started hitting his shot more consistently.  Shawn Kemp spent some time on the bench, but not enough to not make an impact.  It was when James Harden was forced to guard Gary Payton that the Sonics began to pull away.  Harden gave up 5 points in 2 minutes to the Glove before Coach Brooks subbed Westbrook back in.  At this point, Seattle had a double digit lead, the bench was failing to show up for OKC, and Hersey Hawkins was refusing to miss a shot.

The fourth quarter was rough for OKC.  Hawkins, Kemp, and Payton proved to be overwhelming for the Thunder.  Kemp with his powerful dunks, Payton with his defense and passing, and Hawkins with his lights out shooting.  He ended the day shooting 70 percent from the field.  Towards the end of the game, James Harden tightened the lead to just 8 points, but the Sonics were quick to bounce back and extend the lead until OKC realized this was not their night.

Game 1 was a night to forget for Kevin Durant and his Thunder.  KD seemed to be the only player to play a normal kind of game.  Westbrook played poorly on Payton and shot 8-20.  Thabo Sefolosha had a nice day from behind the arc, but failed to contain Hersey Hawkins.  And Serge Ibaka had too much to handle with Reign Man.  On top of that, there were only 21 bench points scored and 15 of them came from James Harden.  Nazr Mohammed received nearly 20 minutes but missed 3 of his shots--but he had 6 rebounds.

The Sonics played a near perfect game.  All starters scored in double digits and most shot efficiently.  Gary Payton was lock down on Westbrook.  Shawn Kemp exposed Serge Ibaka's defensive weaknesses, as did Hersey Hawkins.  And Detleff Schrempf made Durant work hard on defense.  Overall, a poor night for OKC as the 1996 Sonics devastated them both offensively and defensively.  Game 2 will be just as difficult.  Let's see how it plays out.