Naked Serge Ibaka is on the cover of ESPN Body 2014

Serge Ibaka is one of the truly remarkable athletes in the NBA, and he is now featured in ESPN's annual "Body Issue."

Share All sharing options for: Naked Serge Ibaka is on the cover of ESPN Body 2014

Russell Westbrook just launched his own eyewear brand, and Serge Ibaka apparently wanted to get into the act too, but instead took his clothes off for the ESPN "Body 2014" issue. 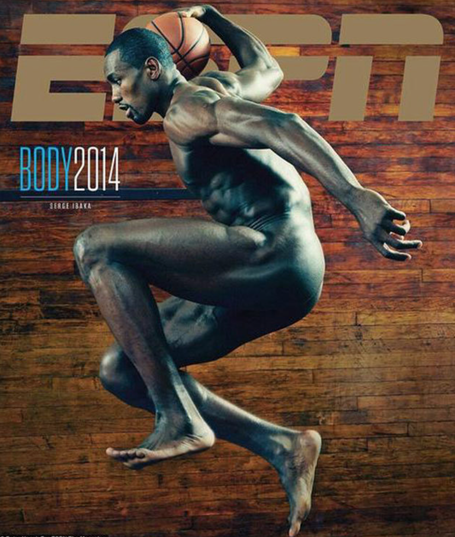 After all the work Ibaka had been doing in the gym, he probably wanted to show us how his body is progressing.

'' I didn't want to believe that God could let me down like that. I said "I'm not just going to sit back and watch the rest of the playoffs at home." I wasn't listening to them. They told me "This is dangerous, this is serious; you can't play like that." I was like, "Man, excuse me, I'm about to play. This is too early to happen to me. (1) I'm not getting surgery, and (2) Trust me, I'm going to be back to play. At least one game, at least Game 7 or Game 6 or whatever, I will play."

'' If you put some work in, you can have this body. It's not because all basketball players have this body, no. I have this kind of body because I put a lot of work into it. I work out a lot. ''