Rookie Mitch McGary was incredible with 18 points and 13 rebounds in the Summer League win.

It began once he entered the court. The feeling of even being near a guy like Mitch McGary gives an energetic vibe. Some of his intensity and upbeat personality rubs off on every one around him. At Michigan, McGary was always the guy who cheered on his teammates, gave high fives, and helps his fellow players get off the floor if they had fallen.

It seems like things haven't changed much now, either. During warmups, Mitch was clapping, giving high fives and getting his team excited to play the Brooklyn Nets. From his monster slam dunks to his vocal skills, McGary was born to lead.

Before watching the game, I compared him to Nick Collison in the way they both were intense, focused and good role players. Now, I have learned that McGary's package is much more diverse than Collison's.

How does Mitch McGary fit in with OKC? 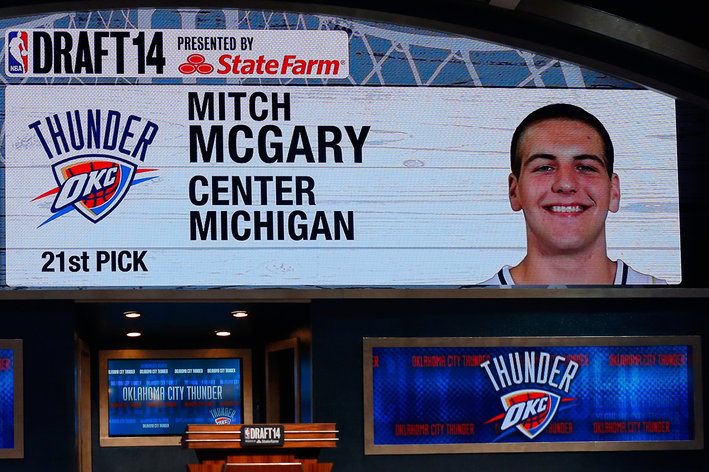 BT Powerhouse takes a closer look at what could make McGary special in OKC.

Immediately from the jump, McGary was all over the place. He was facing off against a center who had 3 inches on him in Mason Plumlee. It seemed as though he was going to struggle grabbing rebounds because of Plumlee's size advantage. However, McGary utilized his weight and strength and went up for every rebound like his life depended on it. At the end of the half, he had 10 rebounds (5 offensive, 5 defensive). He was hitting his low post layups and draining his mid-range jump shots, and his smile and facial expressions were a nice indicator of how much he was enjoying his performance. Going into the game, I prepared myself to see poor shooting from the big man. Now I know that when McGary is on....he is on. He finished with 18 points.

Aside from putting the ball in the basket, McGary showed remarkable ball handling skills, especially in the open court. He dribbled well for a 6'10'' F/C and led the break a number of times. In transition, he filled his lanes well and sprinted as fast as he could. Finishing above the rim was a highlight of McGary's day. McGary's style of grabbing defensive rebounds, pivoting, and leading the fast break reminds you of other great players such as Chris Webber, Charles Barkley, and Blake Griffin.

But what truly surprised me was his ability to move the ball.

Seeing the Spurs win a title through team basketball has increased my interest in a player who can pass. During the draft, I wanted the Thunder to draft Kyle Anderson, a forward who passed the ball extremely well. In free agency, I wanted Josh McRoberts, a big man who is well known for his ball distribution, to choose OKC. Tonight, McGary caught me off guard with his passes and skill to get the ball in his teammates hands in a position to score. At the end of the 3rd quarter, McGary had this sweet bounce pass to Jeremy Lamb who was cutting to the basket. It was like watching Boris Diaw all over again....and I love Boris Diaw. Whenever McGary was in the game, the Thunder played extremely well. When he was taken out, the Nets caught up. His impact was obvious.

The only negatives I saw from McGary was his partial struggle in guarding taller players in the post. He played nice defense most of the time and was all over the ball on pick and rolls. However, the struggle was clear when he was forced to guard Plumlee. Several times Plumlee was able to catch the ball deep in the post, pivot, and score over McGary.

I spoke to Mitch after the game and he said that his shot was on and that he feels comfortable from a deep range, but when the other players come back, he is going to stick with his normal play. I asked how his back felt. Confidently he replied, "Great.  My back has been feeling good." It was clear that with all the diving for balls and going up hard for rebounds, his back is healed.

I really liked what I saw from the 21st pick. I think he will be a valuable piece to the puzzle during OKC's pursuit of a ring. Great things are to come from the rookie. Maybe not next year, but in the years to come.