Three point specialist Anthony Morrow is available in free agency. Is he worth pursuing by the Thunder?

The Oklahoma City Thunder have reportedly expressed interest in the acquisition of  Pelicans shooting guard Anthony Morrow. According to Marc Stein:

Word is both Heat and OKC Thunder are chasing Morrow. As was Orlando, I'm told, until Magic secured their deal with Ben Gordon as well

From Kurt Helin at ProBasketballTalk:

Morrow shot 45.1 percent from three last season, he does that exceedingly well. He’s not going to give you much else, but the one thing he can give is something both Miami and Oklahoma City could use more consistently.

Oh, and he’s affordable, having made just $1 million last year.

Why this move makes sense for the Thunder

With Thabo Sefolosha officially becoming a Hawks player, the Thunder are urgently in need of a reliable 2-guard. Anthony Morrow would fit with the Thunder 2nd unit as a dependable 3-point shooter. He would be responsible for removing some of the pressure to score from Kevin Durant and Russell Westbrook. Morrow should be considered an elite level 3-point shooter, as his 2013-14 shot chart suggests: 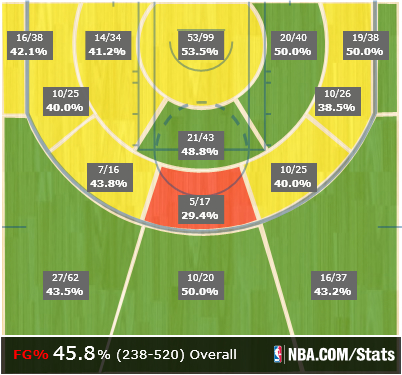 Morrow decided to opt out of his previous contract, which only would have paid him $1.1 million next season. In a players' free agent market, and with players such as Jody Meeks going for $20 million over 3 years and Ben Gordon for $9 million over 2 years, clearly Morrow believes he can negotiate for a considerable pay bump.

Why this move does NOT sense for the Thunder

Anthony Morrow may be cheap now, but it is difficult to predict whether he will be an inexpensive option tomorrow. Shooting at an elite 3-point level earns notoriety, and Morrow may be looking for something in the $3-4 million range. He is also less experienced than Mike Miller, who is the Thunder's apparent #1 target as a backup shooter. According to Michael Scotto, Morrow has drawn considerable interest:

Sources: Anthony Morrow, one of the league's best shooters, has received interest from 12 teams around the league since free agency began.

Those teams will have potentially better offers for Morrow than the Thunder, which will drive up his asking price.

What is the likelihood of this happening?

According to Marc Stein of ESPN.com, the Miami Heat are trying to secure an agreement with Morrow, a player preferred by Lebron James.

Name of one target Miami is trying to secure for LeBron has emerged: Sources say Heat making push for perimeter specialist Anthony Morrow

It is good for a player like Morrow to be the object of competition between two contenders like Miami and OKC, so what it will come down to is money and opportunity. OKC may not be able to compete with other teams in terms of salary, but if they can convince Morrow that he'd be given a prominent role, they might have a shot.

Morrow would fit in very well with the Thunder and solve a lot of their 3-point shooting woes. If they can make an offer that is compatible with their cap structure, he would be a significant acquisition.

The Thunder's pursuit of Anthony Morrow