The Thunder began 2013-14 hoping Russell Westbrook could recover from the previous season's devastating knee injury. He returned way earlier than expected, then missed 27 games in the middle of the season. He returned to form when it mattered most.

Notable factoid: He has no middle name! Of course he doesn't.

Nickname: While we're talking about how cool he is, we've reached the point where Westbrook is just "Russ." We've got Lebron, we've got Melo, and we've got Russ (I'm sure there are others, but you get the point).

Contract Status: Entering the third year of a five-year max.

For the first time in his career, Russell Westbrook entered the season as a real question mark. Not because of his play (well, maybe some people still questioned his play, but they shouldn't), but because of Beverley. Doctors said it would be 4-6 weeks before Westbrook could even return to the floor, and while that obviously changed, even when he returned, no one really knew what to expect. This was one of the biggest freak athletes on the planet, how would a knee injury affect that? Would he still be Russ? Which is to say, would he play without any concern for human health and simply refuse to let up no matter the circumstances? Or would the injury cause him to go more conservative? Does Westbrook even know how to play conservative?

Craig Brenner summed it up nicely in the preseason preview:

Now that he is coming off this knee injury how long will it take him to regain his 2012 form? Not just physically but also mentally. Westbrook has always been a fearless offensive player. He attacks the rim with so much force and anger that it looks violent and painful. Will he still be able to play with that reckless abandon after this injury?

It's interesting to reread that entire post today because you get the sense of how uncertain the start of this season was for Westbrook. That's crazy to think about now that the season is officially over, because Westbrook  would be on just about any Top 10 list, and probably more than a few Top 5s. The point is, we've already kind of forgotten that, before the 2013-14 season even tipped off, we weren't sure if Russ could really ever be Russ again. We hoped he could, but no one was sure. And then...

On Christmas Day, 2013, Russell Westbrook played one of his prototypical Russ games. He struggled with his shot (finishing 5-15 from the field) but refused to let that detract from any other part of his game. He gathered 13 rebounds - reminder: he's a point guard - and dished out 10 assists. He also recorded a steal and a block and, most impressively, turned it over just twice, on his way to a +17. After missing just two games at the start of the season, and taking a month or so to round into form following an offseason of recovery, Russ looked like Russ again.

Then he had his third knee surgery in eight months and missed the next 27 games.

That was really the major blemish on his regular season - the fact that he missed games - and everything is graded with those circumstances in mind. Even after that second return, Westbrook faced a minutes restriction so as to ensure no further complications with that knee. All of that aside, he certainly didn't play like a guy that had knee problems.

He still scored, averaging 21.8 points per game despite playing just 30.7 minutes per game. Weighted per 36 minutes, his 25.5 average was a career-high in that category. He also continued his play as an elite rebounder from the guard position, averaging a career-high 5.7 per game despite the minutes restriction. Even sharing the basketball - something Westbrook wrongfully takes way too much criticism for not doing - was improved, as his 8.1 assists per 36 minutes were just shy of his career-highs.

All of that is simply a numbers-heavy way of illustrating how silly we all were for sharing those worries with Craig that Westbrook wouldn't be the same player.

Of course, the Thunder actually played quite well in his absence, going 20-7 during that stretch while Westbrook recovered. For whatever reason, that led to the inevitable regurgitation of the should-have-been-retired "The Thunder Should Trade Russell Westbrook" argument, which seemed like a panic move to a small sample size of games.

Through it all, the injuries, the noise from the outside, Westbrook finished with the 8th-best PER in the entire NBA, just two spots below Chris Paul, and ahead of  guys like Stephen Curry, James Harden, and plenty of other superstars. Then the postseason came, and whatever lingering doubt there still may have been was completely washed away.

Look, Westbrook's shooting numbers will never be great. There have probably been over 500,000 words written over why that isn't the end-all, be-all with him, so it's not worth going into any further detail in this space. But beyond those percentages, you get the sense of just how integral Westbrook was to giving the Thunder a chance to compete for another NBA Title.

To begin, he averaged 26.7 points, 8.1 assists, and 7.3 rebounds, making him the first player to average 26/8/7 for an entire postseason since Oscar Robertson 50 years ago. In fact, it was just the fifth-ever performance of that kind, and only Robertson and Bob Cousy had done it. That's some seriously elite company, and really the perfect illustration of what an all-around effort Westbrook gave night in and night out from Game 1 of the Memphis series all the way through that overtime heartbreak to the Spurs.

What really changed for Westbrook, though, was that not only was he in complete control of everything on the floor, he was doing it all the way to the final buzzer. According to NBA Stats, Westbrook averaged the fourth-most points in the clutch (defined as the last five minutes of the fourth quarter or overtime where the game is within five points), behind just Mike Conley, Damian Lillard and his teammate and league-MVP, Kevin Durant.

On top of that, while he had his moments and, really, games when he wasn't up to par, Westbrook's defense always seemed to rise to the occasion when needed most. The last-second steal to force overtime against Mike Conley is the best example of that, but his 2.2 steals per game in the playoffs tied him for second with Paul George behind Chris Paul, two guys who get way more credit for their defense than Westbrook ever seems to. Again, he did that while also carrying a heavy burden on the offensive end, as well as rebounding at an elite clip.

Any doubts over Westbrook the player should have been washed away with that. There will always be the detractor here and there that refuses to see what Westbrook brings beyond the sometimes-questionable shot selection, but for the rest of the league, the control, the poise, the relentlessness, the rebounding, it was all on display for 19 playoff games.

Doc Rivers said during the Thunder's series with the Clippers, "I don't think I've ever come into a series where my biggest fear is point guard rebounding." He certainly wasn't alone is fearing Russell Westbrook, and if he can match that level of play in the future, it won't just be the rebounding that will scare opposing coaches.

Not to self-promote too hard here, but I did a Top 10 plays of both the regular season and the Playoffs, both of which are full of Russell Westbrook plays. I already mentioned the steal of Conley, the Golden State buzzer beater from the regular season is also excellent, as is his four-point play, but I think my actual favorite isn't on either one of those lists. It was the last minute of Game 5 of the Thunder vs. Clippers.

That game just said so much about what makes the Thunder so much fun to watch, and such a tough matchup for any team. Yes, this is Kevin Durant's team. Yes, he's the MVP. Yes, he hit a gigantic 3-pointer to set all of this up. This was still Westbrook's moment though. From the rebounding, to the out-of-nowhere steal, to the clutch free throws, Westbrook showed off his entire arsenal. If Paul doesn't foul him on that shot attempt... heck, if Paul doesn't try to get crafty and just protects the ball to prevent the steal, the classic Westbrook gripes come back in full force. But Paul did foul him, and Westbrook, with an entire facet of the population just waiting for him to miss so they could call him a choker, stepped up and buried all three free throws. It was ice cold, and it most certainly swung the series and gave the Thunder a signature win for the ages. It also gave us one of the iconic images of Thunder history. 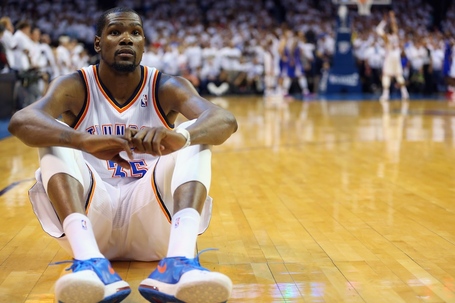 KD couldn't watch. We could all barely watch. Russ had it the whole way.

I got all this way without saying what I really wanted to say, and that is that I think Russell Westbrook was the most valuable player for the Oklahoma City Thunder during the playoffs. Durant was still the best, for all of the reasons he's always been the best. He scored (mostly) efficiently, he stepped up in big moments (mostly) to hit big shots, and he was the steadiest hand throughout.

I can't remember ever appreciating Westbrook's motor more than I did during this postseason run, though. It has reached a point for the Thunder now where anything less than a championship is deemed a failure. That creates a ton of pressure and, with that, a ton of noise when things don't go well. Maybe along with Scott Brooks, Westbrook takes the unfair brunt of that, yet he's never let that change who he is. The #LetWestbrookBeWestbrook thing took off during this run precisely because of that. Those that have followed him this long know what to expect, how futile it is to try and change it.

Most importantly, Westbrook knows what he is at this point. He's admitted that sitting out those games in the middle of the season changed his perspective on how to play the game. That doesn't mean change what it is that has made him such a unique talent thus far. It just means harnessing those talents more effectively and using them to help the entire team on the floor.

After missing half of the regular season, Russell Westbrook rounded into form when the games became most important. With what should be a full, healthy season ahead of him, the expectations to continue at that level will be higher than ever. If his postseason is any indication, he's more than ready.