Would you trade more than 97% of your first-year salary in professional basketball for some extra D-League playing time?

Share All sharing options for: The significance of Josh Huestis being the first potential D-League draft-and-stash player

A few days ago, the Oklahoman's Darnell Mayberry reported that the Oklahoma City Thunder were considering to go the path of stashing 29th overall pick Josh Huestis in the D-League with their newly relocated affiliate, the former Tulsa 66ers, whom are now joining their parent club in Oklahoma City.

As the 29th overall pick, Huestis would become the first player selected in the first round to forgo his rookie season to sign in the D-League. In other words, he'd be the first-ever domestic "draft-and-stash" player.

NBA teams have long drafted international players and left them overseas, developing on someone else's dime. But if Huestis signs with the 66ers as expected, he'll be an American-born, American-bred prospect who, as a first-round pick, could be the flag-bearer for how the NBA envisions the future of the D-League.

The Thunder would be making history with this move. As Mayberry pointed out, never before has a first round pick gone unsigned by the team that drafted him only to be stashed domestically. Some first rounders, almost all European, play overseas for a few years, but apart from those foreign prospects, first rounders are taken in order to become part of the team and are rewarded with a guaranteed NBA rookie contract (unlike second rounders, whose contracts are non-guaranteed).

To date, the only players to go to the D-League after being drafted are some second rounders. A notable example is Grant Jerrett, the 40th overall pick in last season's draft that the Thunder acquired last season. There's no doubt he's the closest thing there is to a precedent for Huestis. Jerrett spent last season with the 66ers before officially signing with the Thunder late in the season, and then inked a long-term deal with them this offseason. Of course, the difference between him and Huestis is that Huestis is a first rounder.

NBA should stop Thunder from denying rookie his full pay 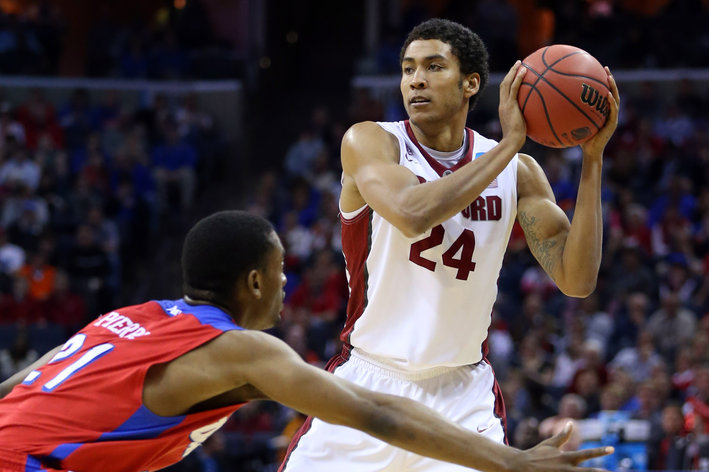 Tom Ziller writes that the Thunder may have found a loophole that allows them to strong-arm their first-round pick into accepting a D-League salary for one year. The NBA can't allow that to happen.

The Thunder have always been progressive with how they've used the D-League (related: Jeremy Lamb's transaction log on Basketball-Reference in the 2012-13 season), and this would represent another step forward in making a true minor league system of the D-League.

The NBA has pushed the D-League hard in recent years, expanding and building the value of single-team affiliations at a rapid pace. This summer alone, the Utah Jazz and the Memphis Grizzlies chose to enter an exclusive affiliation with the Idaho Stampede and the Iowa Energy respectively. The D-League will feature a record 18 teams next season, 17 of which are partnered exclusively with one NBA team and the last one, the reigning champion Fort Wayne Mad Ants, being shared among 13 teams. Safe to say, that isn't going to last and even more D-League expansion will be coming in the future, especially as more teams realize the value of a one-to-one partnership.

The Thunder have stood out as one of the teams most eager to take advantage of their D-League partnership. They've been noted for regularly sending down and calling up players between the big club and the D-League, the Lamb transaction log from earlier standing out as an example. The benefit for those players is that they get regular playing time in the D-League that they may not get with the Thunder, and if a need arises (say, an injury occurs), it's easy for the Thunder to recall them. Now, Huestis will represent the next step forward from that by playing with the 66ers full-time, but still remaining in Oklahoma City for the Thunder to oversee his development.

It's no surprise why the Thunder would want this, but to enumerate, here is what they would gain:

It is more curious why Huestis would agree to this. Playing in the D-League for a season would mean signing on for the D-League maximum salary of $25,000, whereas the scale salary for the 29th overall pick next season will be $918,000, more than 36 times the D-League salary. 36 times! And almost all rookies sign for 120% of the scale salary (notable exception: Roberson last year)! I assume the Thunder have already promised to sign Huestis to that rookie contract later on and I doubt they would plan to renege on that, but Huestis is still effectively wasting one season of his earning power here.

The plan here is obviously that by getting more playing time now, Huestis can become a better player and make more money later on. But it's unclear if sacrificing almost his entire season one salary to do so will significantly increase the money he makes later on, especially since he'll be entering free agency one year later. He's already 22, and if he's good enough to warrant a second NBA contract, he won't enter free agency until he's 27 years old – versus being 26 if he just signed with the Thunder now. That's one year of his prime that he'll be giving up now, which is a pretty significant gamble. And remember, it's not like he can't play in the D-League if he just signed with the Thunder now.

One has to wonder about the behind-the-scenes mechanisms going on here. Are there some secret, potentially subversive promises being given out here? The CBA specifically disallows "under-the-table promises of future contracts", although this being a fresh draft pick does come with some unusual circumstances compared to a free agent (this is still a draft-and-stash in the end).

Or worse (though I'd hate to think they'd force this on him), could they be holding out on Huestis and keeping his draft rights as leverage? They could theoretically elect not to sign him, leaving his options as signing in the D-League, in another pro league, or sitting out from professional basketball one season so that his draft rights with the Thunder expire. That's not far from blackmail, especially given that first round picks are usually considered to have guaranteed NBA contracts from day one (because almost all do sign) unless they remain overseas.

I'd like to think the Thunder aren't scheming with ill intent. Maybe they made a draft promise to Huestis, a common practice on its own, provided he agreed to this development plan – although it's unclear if this would be treated as circumvention of the CBA's will or not. Though he was drafted 29th, Huestis had second round stock (he went 47th in DraftExpress' final mock draft), and perhaps he agreed to sign one year later for the benefit of getting the guaranteed money that a second-rounder doesn't get. Also, if Huestis does prove to be a fast learner and is ready for playing time faster than expected, the Thunder will have him locked in at the salary a 29th draft pick is due for the next four seasons.

How this specific situation gets resolved will be an interesting subplot as the Thunder's offseason winds down heading into August. One way or another, two things are clear: this is a step forward for the promotion of the D-League, and the circumstances surrounding domestic draft-and-stashing are far from ideal and will need to be further hashed out in the next CBA. The salary drop-off is nuts, even if the on-court benefits of receiving consistent playing time are real.

Now that the first potential D-League stash scenario is occurring, the NBA is sure to be watching closely and there could be more adjustments coming to the D-League so that stashing rookies in the NBA's minor system can become a fair and beneficial practice.

(Updated 7/23 with clarifications in regards to the CBA)