The Oklahoma City Thunder declined to celebrate Seattle's 1979 championship with a golden band on their Jersey.

Share All sharing options for: Oklahoma City Thunder refuse to honor the Seattle Sonics' championship past on their jerseys

It was revealed that 17 NBA teams that had won a NBA championship in the league history would go through a change in their uniforms. In fact, only 16 teams out of the 17 teams are going to incorporate the respective change.

These selected uniforms are going to include a gold band on the neckline that is going to represent the number of titles a franchise had won as a way for celebrating the teams' titles. However, the Oklahoma City Thunder jersey is the only jersey among the 17 teams that will not include the golden band, which is because the Thunder declined to celebrate Seattle's 1979 championship with a jersey patch.

According to Christopher Arena: ‘'As of right now, they are not wearing it," Arena said. "They actually would have had to have told us that some time ago, and that was their choice. We have several teams who have a lineage that exists prior to the city that they're in. Some teams embrace that past, some teams don't. Whether it's because of ownership changes or perhaps the lineage is too great of a distance or the team nickname changed or whatever it may be, that's their decision."

There are several teams whom have a history involving relocation such as the Lakers who fortunately included the Minneapolis as a part of their history. Even, the Atlanta Hawks and Sacramento Kings who won their championships in St.Louis in 1958 and Rochester, New York in 1951, are going to add a golden patch on their Jerseys, but it seems that the Thunder are looking for some sort of separation between the two franchises. 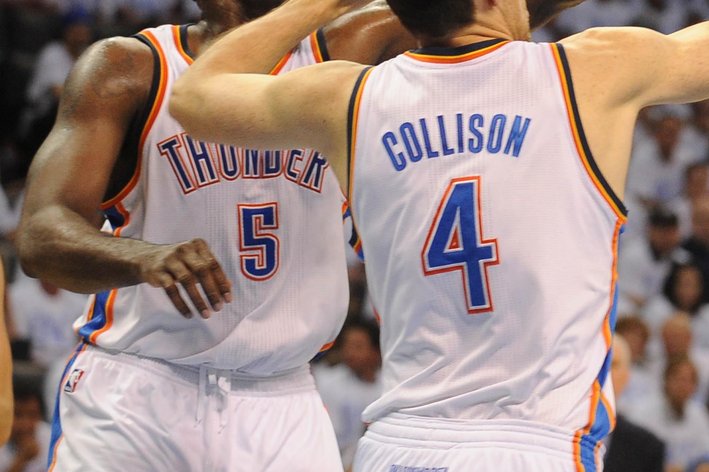 In my opinion, the issue here is not that the Thunder are not embracing their roots or history, it's just that they don't want to honor their championship past with a golden patch on their Jersey. They want to win a new fresh championship that would be honored on their jersey by their name "Oklahoma City Thunder." Never the less, some writers take issue and use it as another dig on the Thunder ownership. Kelly Dwyer writes:

The least the Thunder’s owners could do is throw a bone to the community that it lied to prior to failing to make an honest attempt to keep the team in Seattle.

The team has apparently decided not to. In the NBA’s latest and crassest attempt to cram more money into its coffers, the Oklahoma City Thunder still managed to come off as the crassest of all. Well done, gentlemen.

Meanwhile, Daily Thunder's Royce Young offers a dose of perspective on the precarious position the Thunder are in:

Of course, had the Thunder placed that patch on the back, you already know what the response would’ve been. 'How dare they celebrate something they didn’t win.' There was no way for the Thunder to win this thing. So their choice was just to remain (kind of) consistent when it comes to handling the awkward Sonics history.

Perhaps the lesser of two evils is best - act as if the Sonics history isn't related and endure the wrath of professional writer screeds, or claim the history as their own and watch Sonics Nation reignite the flames all over again.

Want proof that OKC is making the right move? Look no further than Sonics Rising, where they are in rare agreement with owner Clay Bennett. Commenter danieltiger writes:

Seriously, it’s a big step in everyone moving on. The Thunder are not the Sonics, they bought the right to have a franchise and to employ Kevin Durant and Nick Collinson. Everything else is Seattle’s. I understand that they are holding on to the rights, but when we get a team back that will end. First time I’ve ever been happy with something the Thunder have done.