Pau Gasol is set to become a free agent tonight and he is reportedly visiting the Thunder. Should OKC make a move for him?

Is Pau Gasol interested in joining the Oklahoma City Thunder?

Pau Gasol will meet with the Thunder on Monday, as he will be a free agent as of 11PM CDT tonight after making $19 million with the Lakers last season. Gasol is also scheduled to visit the Bulls and Warriors once free agency begins.

The Oklahoman reports that:

Gasol would have to take a big time pay cut to come to Oklahoma City, but the veteran forward has said numerous times that his priority is playing for a title-contending team.

Marc Stein reports that the Thunder HAVE contacted Gasol:

Why this move makes sense for the Thunder

Pau Gasol is a great center filled with championship experience. One of the NBA's most dynamic post players, his size helps him dominate his opponents in the paint as well as in the perimeter pick and roll game. One of the Thunder's longstanding weaknesses has been their lack of a post presence, since Thunder score most of their points either by attacking the paint or jump shots. Gasol would make a great fit as a 3rd scoring option supporting Durant and Westbrook.

While Gasol is no longer the defensive presence he once was, he would team up well with Serge Ibaka. Gasol could play off of Ibaka's athleticism in order to maintain the teams' paint protection. While Gasol's age and wear and tear would likely hinder OKC overall defensively, Gasol would enable them to dictate matchups in a way that they have not been able to.

Why this move does NOT sense for the Thunder

Age and cost are the two primary concerns. 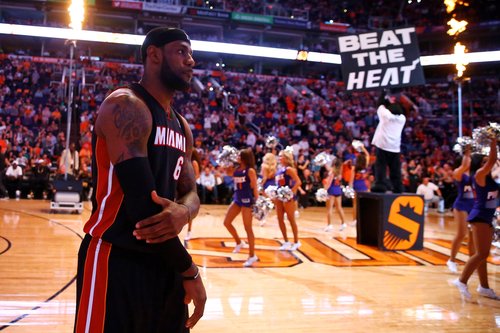 Free agency is eminent; which players are worth chasing?

Gasol is 33 year old 7 footer and has played a lot of basketball over the past decade, averaging nearly 35 minutes a game. Even as his ability to play full seasons has declined (he has not played a full season since the 2010-11 season), his minutes have only been marginally reduced. Scott Brooks has a propensity to overplay veterans; could he effectively manage Gasol's minutes in the way the Spurs did with Tim Duncan, or the Heat did with Dwyane Wade?

Moreover, the Thunder had already drafted a big man, which means that they now have Kendrick Perkins, Steven Adams, Hasheem Thabeet, and rookie Mitch McGary in the center position. If Gasol were to come aboard, what would it mean for these other players?

Regarding compensation, Gasol made $19.3 million last season and has not made less than 8 figures since he was in Memphis. He has stated that he would take less to play for a contender, but how much less would that be?

What is the likelihood of this happening?

If the Thunder sign Gasol, they won't be able to afford signing another dependable scoring shooting guard. This will leave them in a critical position on deciding whom to start at the shooting guard spot, because right now they are thin at the position, as neither Thabo Sefolosha or Caron Butler are expected to return. Would acquiring a former all-star in the final stages of his career overcome the Thunder's lack of production from the perimeter? GM Sam Presti likes sure things and calculable risks. How big of a risk would Gasol be?

Instead, OKC could offer the taxpayer Mid-Level Exception. This is also about the best that the Knicks, for example, would be able to offer. That would allow for a deal up to 3 years and up to $10.3M total. That'd be quite a pay cut for Pau.

Or, if OKC could get the Lakers to play along, they could do a sign-and-trade and slide Gasol into the $6.6M trade exception [obtained in the Kevin Martin trade] they are sitting on (expires July 11). That would allow for up to 3 years and $20.7M total. OKC would have to send something to the Lakers in this transaction though. Could be as little as the rights to a draft pick (thus preserving cap space for the Lakers, if they so desire) or sending more substantial assets.

In short, I don't think it's very likely. But we'll see.

Mr. Hamm can be followed @JonMHamm.

As tempting as Gasol is with his skillset, let us not forget that he is 33 years old and is coming of an injury that caused him to miss a quarter of last season. Also, it is going to be risky signing such a player and leaving the team short on the shooting guard spot.

It would be a risky move for sure, but even with a healthy Gasol in 2014, it may still leave the Thunder too weak at the position that hurt them the most this past postseason.