Report: Miami Heat are interested in trading for Kendrick Perkins

In 2014 NBA finals, we witnessed how the Spurs crushed the Heat, and broke out their interior defense easily with big men Tim Duncan and Tiago Splitter who could finish in the paint. With only Chris Andersen active (Greg Oden barely played), the Miami Heat realized that they need to bolster their interior defense. 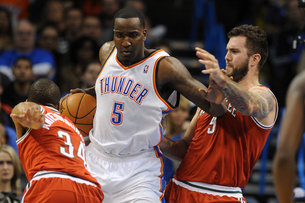 Get the lowdown on how we graded Kendrick Perkins in this season gone by. What is his remaining value to the team?

Chris Andersen is on the decline and Chris Bosh's status unknown in terms of whether he is going to opt out of his current contract. This puts the Heat in a critical situation, and makes them paper thing at a spot where they were already behind most other contending teams. In this light, according to Chris Broussard of ESPN.com, the Miami Heat are interested in Kendrick Perkins.

‘'The Heat could stand to add more talent at point guard. Kyle Lowry would be their dream, though Toronto must be considered the favorite to retain him, Miami could also land much needed help on the wings by snagging Shawn Marion, Marvin Williams or Trevor Ariza. I am also told that Pat Riley intends to make a run at Oklahoma City center Kendrick Perkins, who has one year left on his contract ‘'

It is quite surprising that the Heat have kept their eyes on Perkins, especially after he was essentially played off the court the last 2 times the teams played when the Heat played small ball. On the other hand, it seems that the Miami Heat are not looking for a center to rely on nightly, but one who is a good situational defender that has championship experience. Perkins has been much maligned over the years, but after Scott Brooks finally reduced his minutes this past season and maximized his effectiveness in lineups, Perkins became an asset once again.

The big question of course is how well would he fit into the Heat's fast paced offense, can he finish at the rim any better than he has in OKC, and will he stay healthy. Perhaps because he is in the final year of his overburdening contract, a team like the Heat, exposed so badly in the playoffs, is willing to roll the dice.

Lastly, what would OKC get in return? Daily Thunder's Royce Young opines:

Perk is on an expiring, which gives him as much trade value as he’s ever going to have. If the Thunder truly feel that Steven Adams is prepared for a starting role, they could pull the trigger. The issue is, what do the Heat have that the Thunder would care about? They only have one player under contract for next season — Norris Cole — and the No. 26 overall pick, which the Thunder don’t especially need.

Get ready for one of the most fascinating drafts yet, and this potential trade might be a part of it.