Rookie Steven Adams was expected to spend a lot of time in the D-League this season. He shocked everyone.

Contract Status: Guaranteed rookie contract by virtue of being 12th pick in 2013 draft

The Big Funaki's upbringing has been well documented, from losing his father at age 13 to cancer and becoming a street kid all before being relocated to Wellington by his elder siblings. After spending a few weeks in the capital, Adams moved in with Blossom Cameron, a friend of his older brother. Cameron would later become his legal guardian and as a former basketball she introduced him to the game. She would also introduce him to Kenny McFadden, who ran a basketball academy in the capital.

Adams, not having the funds to support him in the New Zealand national system, as it was a pay-for-play system made the most of playing basketball in the Wellington area. But his fortunes were about to change, McFadden was friends with Pittsburgh coach, Jamie Dixon. Whilst on tour with Team USA for the U-19 FIBA World Championships, Dixon took a trip to Wellington to see the 15-year-old Adams and the rest is history.

Adams went on to play a season with the Wellington Saints in the New Zealand Basketball League, winning rookie of the year honors and helping the Saints to the championship. Afterwards he would have a stint at Notre Dame Prep College in Massachusetts, finishing the season as the number six-ranked player in the ESPNU 100.

Finally, Adams spent one season with the Pittsburgh Panthers, winning Big East All-Rookie Team honors. He averaged 7.2 points, shooting 57.1% from the field, 6.3 rebounds and 2.0 blocks whilst playing. 23.4 minutes per game

Following his freshman year, he declared for the draft. The Thunder picked him up at pick 12.

If we are honest with ourselves, nobody expected Adams to be a factor this year. It still surprises me (not Ned Stark actually being killed level of surprised, but surprised me none the less), who would have expected 81 games out of a 20-year-old rookie center that was about to suit up for his fourth different team in four years. The common thought was to Adams would travel on the I-44 to Tulsa to learn his trade via way of the D-League.

However, there were clues like this, which should have tipped us off for the awesomeness that we were about to see:

In New Zealand, they do not have the A-F grading system; instead, students are graded using the following system:

To keep things simple, we will utilize the New Zealand system for Adams' season grade. I thought about phoning this grade in, much like many of my teachers did, or at least it sure felt like they did. I received the same report card year after year: "Todd is a great student, he always completes his work and is a quality addition to the classroom. However he needs to avoid distracting other students once he has completed his work." It was like they copy and pasted it every year. One teacher made the same spelling mistake two years in a row!

But unlike the folks that gave my grades, I will make an effort, because I know Steven's guardian will read this report card, and I do not need them calling WLTC seeking answers to the big Funaki's poorly written report card.

Before I give the grade I think its important to briefly review Adams season, in fact I would like to share with you the closest comparison I have been able to make to this point.

No, I'm not talking about Eric Snow, the former Sonic, 76er and Cavalier. But ratherJon Snow, the man of the Night's Watch, the guardians of Castle Black.

It is probably appropriate to divide Adams' year into two semesters. Adams averaged 1.5 PPG more in his first semester whilst also grabbing one rebound more per game. Whilst his shooting efficiency from the field improved, the young kiwi's percentage from the charity striped dropped in the second semester. Although he was consistent in his rebound, assist and steal numbers from semester one to semester two, I think Adam's guardian would have a hard time arguing with the following grades.

Stone Cold lived up to his name, both when it counted in the Grizzlies and Clippers series, respectively. He struck the knockout blow against the Grizz, enticing big bad Zach Randolph to take a swing at Adams in Game 6 of the Thunder's opening playoff series (This won't be the last we hear of the play in this article). The act ensured Randolph would be suspended for game seven and it all but secured the series for the Thunder. From game 6 of that series, Adams would play double-digit minutes in all his remaining playoff appearances.

In game six against the Clippers, Adams played a touch under 40 minutes, his highest all year. He added 10 points to the Thunder total whilst grabbing 11 boards. That's right, the young kiwi, the boy who should never have made it, racked up a dub-dub in game six of the Western Conference Semi-Finals.

I think it would take a harsh marker not to give Adams an "Achieved with Merit" in this case.

If you were after a complete overview of Adams' rookie campaign highlights then the best place to start would be the "Steven Adams Rookie Season Highlight Playoffs." After the dust had settled, Adams first double-double in only his fifth game defeated "The Handshake" to cut down the nets. But the Steven Adams Rookie Season Highlight Playoffs only included the regular season and Adams biggest moment, or at the least, the most discussed moment came in game six of the Western Conference Quarter Finals against the Memphis Grizzlies.

The play mentioned in a previous paragraph, now lets me refer to Adams as "The Closer." It happened in the third quarter after Adams and the Memphis big become tangled running back down the floor, Randolph hit Adams in the region of his big chiselled jaw with a closed fist. Although earlier in the game, Randolph was heard telling the refs to watch Adams, it was the young kiwi who was able to keep is cool and break Randolph. Stone Cold.

As Kevin Yeung said in his Kendrick Perkins player grade:

"Adams could earn the starting job as soon as training camp if he returns playing the same way he did in the playoffs, and he'll probably have the job by season's end one way or another. Perk isn't damaging in a 15-20 minute role, even if that means most of $9.4 million wastes away. We'll see if anything happens in the offseason, but the center platoon of Adams and Swamp Thang will probably return for one more season."

I'm not sure I could give a more realistic prediction than that but for those that have read my pieces before, you know full well I am not the realistic kind. Adams will win the starting job out of training camp because Scotty Brooks will realize that he can't keep going down the same path and expect Joffrey to be killed. You will have to do something different (basically, all I am saying Game of Throne writers, is to stop ignoring my e-mails. It's clear you have not casted anymore with the bravery to take down Joffrey. I am your man, I will travel the entire seven kingdoms and beyond to bring down Joffrey. I am your true ‘King Slayer'). From there, I expect Adams to increase production right across his stat line but more importantly his defense will take a leap at some point next season. If the Thunder is to go even deeper into next year's playoffs, Adams's defense will be paramount.

Lest you forget, we also invented the Steven Adams Rookie Season Highlight Grand Tournament of Spoils and Prime Rib, for which we awarded this spectacular trophy. 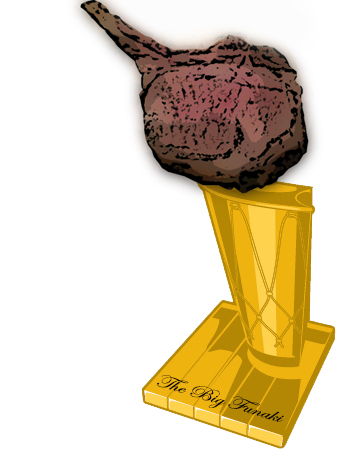 We can only expect that there is much, much more to come!