The Miami Heat are staring at elimination heading into game 5 as the Spurs once again dominated them on Miami's home court.

The San Antonio Spurs played flawless basketball again in game 4 to lead the series by 3-1, crushing the Miami Heat 107-86 on Miami's home court. Game five for the first time in a long time now swings back to the team that started with home court advantage, and the Heat's time at the top appears near-done.

Tony Parker scored 19 points with an offensively-minded performance in the first half that flummoxed the Heat guards. Kawhi Leonard recorded a double-double (20 points, 14 rebounds, 3 assists, 3 steals, 3 blocks) and for the second game in a row arguably outplayed LeBron James. Boris Diaw nearly recorded a triple-double with 8 points, 9 rebounds, and 9 assists and repeatedly found open passing lanes to create scoring opportunities. Tim Duncan notched a double-double as well with 10 points and 11 rebounds, making him the all-time leader in playoff double-doubles. Overall, the Spurs shot 57.1% from the field and 43% from 3-point range.

On the other side, James ended with 28 points. He was the only player lifting the team as much as possible, but unfortunately he couldn't do anything due to the lack of help from his teammates. Wade was 3-13 from the field, and Bosh had 12 points only. However, the Turnovers ruined the comeback of the Heat as they committed 13 turnovers. The team shot 45% from the field.

In the first half, the Spurs shot 55.6% from the field, which seems like a major step-back from their game 3 shooting, but combined with their better defense they finished the half up by 19, holding the Heat to only 36 points. Nine different players from the Spurs team scored. It was a Spurs storm of contribution, with Diaw making a magnificent effort on the floor and under the paint, Parker breaking out the Heat defense and attacking the rim, Leonard hitting the offensive glass, and Danny Green and Patty Mills throwing 3-point daggers. The Heat had 17 points only in the first quarter, and 19 points in the second quarter, while shooting 35.3% from the field. Miami could not even finish at the rim, shooting 4-15 in the paint.

Let us take a look now at both teams Shooting chart in the 1st half: 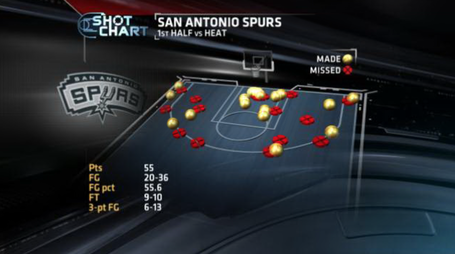 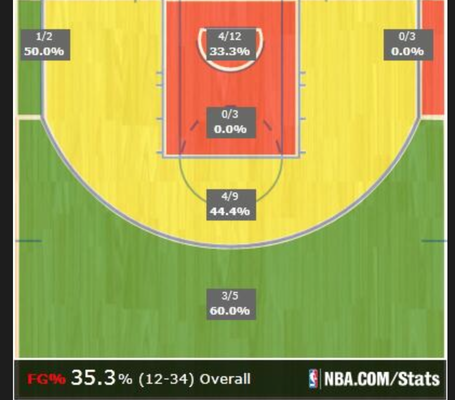 James continued to be the only player  who could consistently score on the floor. He scored 19 of Miami's 21 3rd quarter points, and 28 of 57 throughout 3 quarters. However, he had no other options and the Heat offense was demoralized.

What was, overall, the main reason why the Spurs won?

The Spurs operated at an efficiency that once again has to be witnessed to be believed, only this time, they did it on both ends of the court. The Spurs are slowly and steadily taking away Miami's options to play well, and they are beginning to take bad shots. Miami as a team shoots over 50% from the floor, but this was the first time where it looked like they could not generate any open shots. The Spurs are always a step ahead, making the right decisions, making each other better as the game goes on.

What does this game mean to the Spurs tonight and going forward?

It means that the Spurs need one more game to win the NBA title that they've been obsessed with for the past 12 months. Game 5 will take place in San Antonio, which provides the Spurs with home court advantage. Look for Miami to make one last charge, but if this series has shown us anything, the Spurs will be ready to counter punch it.

Why couldn't the Heat win on their own home court?

Miami's teamwork and sharing the ball has disappeared. They had only 13 assists on 32 made baskets. They did not work to set up the one player who might have a comparative advantage in Chris Bosh. Dwyane Wade looks like he has given up. The whole team generally played with a weak and poor performance. Their defense was horrible and has not taken anything away from what the Spurs were trying to do.

The Spurs dominate both ends of the floor again as they win Game 4 107-86! All 13 Spurs scored in the win pic.twitter.com/8xOH7JVUvA

No team has ever come back from a 3-1 deficit in the NBA Finals.

Tony Parker: "I just think we’re playing Spurs basketball. ... We like to do good to great, the extra pass. We preach that."

LeBron: "I mean, they smashed us. Two straight home games. Got off to awful starts."

Spoelstra: "They played great. I can honestly say I don't think any of us were expecting this type of performance."