In game 3 of the Finals, the Spurs showed once again why their offense, when working properly, is unmatched in the NBA as they dominated the Heat in Miami and took a 2-1 series lead with a huge win.

The San Antonio Spurs responded to a loss on their home court in game 2 by playing nearly flawless basketball for much of game 3, defeating the Miami Heat 111-92.

The Spurs established a magnificent shooting performance and efficiency on the floor, shooting 75.8% from the field in the first half, a Finals record. The Spurs x-factor Kawhi Leonard finally stepped up and by avoiding the foul trouble that plagued him in games 1&2, recorded a career high 29 points, while shooting 10-13 from the field.

For a nice visual of how dominant the Spurs' opening half of offense was, look no further than this shot chart: 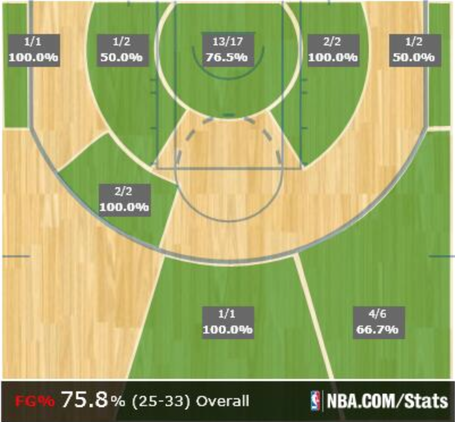 The only players who have scored 29 points or more in a finals game by the age of 22 are Magic Johnson, Kobe Bryant, and now Kawhi Leonard.

This became the first loss for Miami on their court in this postseason. LeBron James and Dwyane Wade both had 22 points, shooting 51.6% from the field, but unfortunately they combined committing 12 turnovers in the game. Chris Bosh had a weak performance in game 3 as he finished with only 9 points and 3 rebounds in 34 minutes of play.

The dominance started from the outset, where Spurs coach Gregg Popovich changed his starting lineup by inserting Boris Diaw in for Tiago Splitter. The dividends were immediate, as the Spurs finished the 1st quarter with a 41-25 lead. This was an amazing and historic level performance, and they did it against a great Heat defense.

The unstoppable dominant Spurs force continued in the second quarter. Leonard made a jumper with 8:08 minutes remaining, which put the Spurs ahead by 25 points and boosted their shooting percentage to 90.5% exactly after 21 shots. Miami wasn't done though; James responded with 16 points and 5 assists, and Lewis hitting three 3-pointers to decrease the deficit to 15. However, even though Miami shot 55.9% from the field in the half on their way to 50 points, they were still loosing 21 points at the halftime, as the Spurs scored 71 on shooting 44 possessions with an offensive rating of 161.4.

Spurs are 1st team to score at least 70 points in 1st half of a playoff game since 1987 Lakers did it in this game http://t.co/pQXdqIeKCg

Miami Heat 1st Half Shot Chart (not too bad) 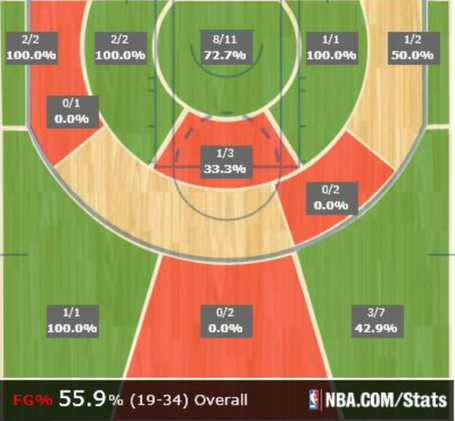 As the second half started, the Heat finally found their defensive footing and quickly closed the Spurs' leadreducing the deficit to 13 points with 6:35 minutes left in the 3rd quarter. With James sitting on the bench, the Heat still fought back until they closed the shortage to 7 points. However, the Spurs' bench responded to the charge, with Marco Bellinelli and Boris Diaw hitting big shots to push the lead back to double digits entering the 4th.

The Spurs only shot 31.5% in the third quarter, but once the 4th quarter began, they returned to play on their usual rhythm. They hit 6 of their 8 shots taking the lead to 16 points, and remained on that performance until the end of the period, and extended the lead to 19 points to seal the victory.

What was, overall, the main reason why the Spurs won?

The Spurs' beautiful offense was clicking at a level never seen before in a Finals game. You have to watch it to believe it. In fact, you can! Here is the opening quarter of offense:

However, what really set the tone was the fact that Leonard was finally allowed to play physical defense on LeBron James, and we saw a huge difference in James' effectiveness when he is not allowed to move freely on the court. James finished with 22 points on 9-14 shooting to go with 7 assists, but he also had a career-high 7 turnovers, as Leonard gave him less room to pass and other Spurs players such as Danny Green did a great job shooting through the passing lanes for steals.

What does this game mean to the Spurs tonight and going forward?

The pressure is now on the Heat, who lost at home for the first time in these playoffs. Their defense went missing in game 3, and is going to have to deal with the Spurs' new wrinkle of Diaw in the starting lineup. Also, the way the refs choose to call the game with regards to Leonard in James will be a huge factor as well.

The Spurs finally got their offense working at a level we had seen in these playoffs, and the Heat have to figure out how to respond, lest they fall behind in the series 3-1 heading back to San Antonio.

Important Reactions by Players on Game 3:

LeBron: "They had us on our heels from the beginning. That's something, at this point of the season, that shouldn't happen."

Bosh: "You can't win a championship with that kind of effort, home or away... We did nothing right, & we deserve what we have."

"They came in with a desperation that we just didn't match," LeBron on the @Spurs Game 3 effort #NBAFinals pic.twitter.com/abBqUAKNnX

"We just don't panic..we continue to share the ball" - Tim Duncan on how @Spurs held on strong in Game 3 #NBAFinals pic.twitter.com/whWOaNGDbZ