Russell Westbrook had a (controversial) triple-double, Durant was an assist shy of having one himself, and the Thunder turned up their intensity to tie the series as it heads back to Los Angeles.

Share All sharing options for: Game 2 recap: Westbrook and Durant shine as Thunder evens series with 112-101 win over Clippers

The Thunder got back to playing their style of basketball, storming out of Oklahoma City with a 112-101 victory as the series moves to Los Angeles.

Thunder basketball is, of course, largely focused on the success of the two superstars, and both Russell Westbrook and Kevin Durant were sensational for their team. Westbrook finished with his third triple-double of the post-season - 31 points, 10 rebounds, 10 assists - though the last assist was incredibly generous considering Thabo Sefolosha caught the ball and dribbled it twice before finishing. Ten assists, nine assists, it didn't really matter, because Westbrook was simply dominant. He completely ramped up his defensive energy, which made it tough for the Clippers to get the fluid ball movement and easy looks they had in Game 1. It also led to some energized offense, as he seemingly hit shot after shot working in the post against the smaller Clippers' guards.

Durant, for his part, came out looking like he wanted to justify his MVP award - as if that was necessary. He started out red hot, hitting a three for the Thunder's first basket, and never really cooling off after that. He finished with 32 points, 12 rebounds and nine assists, and looked every bit the league's MVP while doing it.

It's easy to sit and say "that's how they should play" after a win, but I'm going to do it anyway. Because any area you look, the Thunder improved from Game 1. It started with Westbrook, who obviously took the criticism of his lazy defense to heart. He fought through screen after screen - which drew more than a couple offensive foul calls - and didn't let the Clippers get set in their offense as comfortably as they did in the previous game.

Westbrook was by no means bad on offense in Game 1, but he was careless at times with the ball, turning it over six times. He had four tonight, and the team still had 16, but they didn't seem to came at such terrible times, and also seemed completely within the flow of the game, something the Thunder can live with.

Thunder basketball also meant everyone else keying in on defense as well. There was a stretch late in the first half when the Clippers actually moved out in front, but Serge Ibaka began to settle in on defense and take away any penetration the Clippers were having success with. It altered the Clippers offense and slowed them back down, and was a friendly reminder how effective the defense can be simply by having Ibaka protecting the rim.

Of course, Thunder basketball is nothing without Kevin Durant, and he, too, seemed far more focused. Was it the MVP ceremony? Maybe, but from the opening tip, he just looked more dialed in. Stuck closer to his man on defense, didn't force shots, looked confident taking those shots, and perhaps most importantly, got back to playing distributor a little bit. Durant had a career-high in assists this year, and has proven awfully capable of getting other guys easy shots. He's tended to defer that responsibility a bit too much this postseason. His nine assists were the most this postseason, and he hadn't recorded more than four since Game 1 of the Memphis series.

The point is, the Thunder looked more in command behind their two leaders, and the rest of the team - maybe also galvanized by Durant's team-building speech yesterday? - followed suit.

We've seen Westbrook and Durant come up with big games before, but we've also seen the team still lose some of those games. That's where the supporting guys came up huge tonight.

Sefolosha in particular was fantastic, especially in the third quarter when he went 5-5 from the field (2-2 from 3-point range) for 12 points. It was highlighted by an incredible sequence when he stole the ball up top and got a wide-open dunk, then stole the ensuing inbounds pass and dished to Westbrook who hit an absolutely ridiculous 3-pointer that all but blew the roof off the building.

It wasn't just Sefolosha, either, that stepped up. Kendrick Perkins, in a series where he supposedly has no value, played absolutely fantastic basketball, shutting down DeAndre Jordan, controlling the defensive glass and, most surprisingly, erupting for eight points. His old coach, Doc Rivers, couldn't even believe it:

Doc Rivers: "I coached Perk. I'm pissed at him. I can't believe what he was doing offensively."

Serge Ibaka had yet another 6-10 outing, which seems to be his line every game this postseason, and once again limited Blake Griffin to an off-night. Griffin finished just 5-of-13 for 15 points.

Steven Adams came in and got under Griffin's skin, as well, to the surprise of no one. He handled the pick-and-roll much better this time out. His offense, though, continues to improve, and his activity on the offensive glass, as well as his ability to catch and finish in traffic, is becoming increasingly valuable in this closely-contest playoff games.

At the risk of pulling a KD and singling out every member of the Thunder, suffice it to say that while the two Thunder stars were the biggest keys to success, the supporting cast pushed them over the edge.

The Thunder thoroughly controlled the boards yet again in this one, outrebounding the Clippers 52-36. They had a similar advantage in Game 1, but were unable to get much out of it. A lot of that came down to the fact that the Clippers protected the ball, only turning it over 8 times. Tonight, the Thunder forced 14 turnovers, yet another testament to the far more disruptive defensive effort.

In today's preview, I wrote that if the Thunder could just dial up the defensive energy, everything else would fall into place. That's exactly what happened tonight. The Thunder - led by Westbrook up top - gave the Clippers far less space around the perimeter, forcing more inside action. The interior defense of Perk/Ibaka/Adams/Collison supported that by staying true to their man and not giving them anything easy. Finally, the Thunder crashed the boards, only allowing nine offensive rebounds. It's not an especially complex defensive system, it's just about staying true to the basics and doing them with maximum effort.

They did, and they got the desired result.

All it really means is that the Thunder now heads to Los Angeles tied 1-1, something the Clippers have to feel good about.

It's pretty obvious that the series is going to come down to who can find their defense in each game. In the Memphis series, it was about speeding up the game. With the Clippers, the speed is already set, as both teams thrive in a faster pace.

In the end, it still comes down to who hits bigger shots. Looking at the SportVU stats from both games, the Clippers' offense was incredibly similar. They made 288 passes in Game 1 to 277 tonight. Just 24 of their 82 shots were contested in Game 1, compared to 31 of 83 tonight. Slight improvements on both ends, but more glaring because of the extra turnovers. And again, the rebound advantage wasn't all that different from Game 1 either.

So was it just a case of the Clippers coming back down to Earth after that scorching shooting performance on Monday night? Quite possibly.

But one moment really stood out to me. The game was back-and-forth in the third quarter, with the Thunder punching, and the Clippers punching right back. But with 7:30 remaining and the Thunder up just 68-64, Kevin Durant hit a fairly-contested, somewhat cold-blooded 3-pointer to put the Thunder up seven. It was the kind of Slim Reaper shot he was hitting all season, where the team needed that extra spark to get them going, and he came through, making points out of nothing.

It sparked a 26-13 run - which included the incredible Sefolosha sequence, as well as the Westbrook dunk below - to end the quarter and all but put the game away heading into the fourth.

Those are the moments that swing games, and they're the type of moments the Thunder will need their stars to have to win this one, because the Clippers have stars of their own looking for his own answer.

Grade: A+: Finally, a patterned shirt!!! 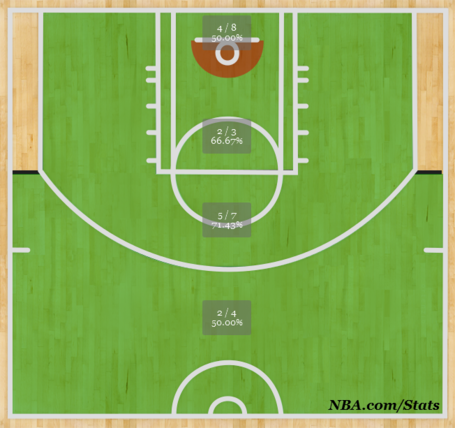 Thunder Blunder: The lightning that struck the transformer and dimmed the lights