2014 NBA Playoffs: Caron Butler in the starting lineup, a change by a changing Scott Brooks

Scott? Is that you?

Share All sharing options for: 2014 NBA Playoffs: Caron Butler in the starting lineup, a change by a changing Scott Brooks

When Scott Brooks made the adjustment to replace Thabo Sefolosha with Caron Butler in game 6 of the Thunder's series against Memphis, it was mildly surprising. Not because of anything to do with the product on the court (it actually made a lot of sense from that perspective), but because Brooks has been so hesitant to change his starting lineup in the past.

The Thunder have trotted out the Westbrook/Sefolosha/Durant/Ibaka/Perkins starting lineup since 2010-11 and Brooks has never really showed interest in switching up the starting lineup unless injuries forced him to. Each member of that starting lineup started every game they appeared in during the regular season, and even with Steven Adams knocking on the door this season, Perkins still held the starting center role firmly. Even Perk! Though the results have also been successful for the Thunder and there are plenty of arguments in support of Brooks' decision, it's definitely frustrating at times.

You can probably imagine how rewarding it was when Butler supplanted Sefolosha in Game 6 and the Thunder proceeded to win both games in which Caron started, which helped end a very close series. This is definitely a 'correlation does not imply causation' thing as much as it is a two-game sample size thing, but who cares. Butler came in for Sefolosha and Brooks made a starting lineup change! (Next thing you know, the Thunder will be amnestying Perkins and naming Adams their starting center of the future.)

In the two games Butler started, he saw 29 and then 41 minutes (neither went into overtime), scoring 7 and 15 points respectively. They weren't dominant performances like his Game 5 explosion (which probably tipped Brooks' hand into starting him) where he made four threes and went 5-of-10 from the field for 15 points, but the ripple effect of having him in the starting lineup goes beyond what his individual stat line shows.

In case you were living under a rock this season, the Thunder spent a lot of the season seeking three-point shooting help to create some breathing space for Kevin Durant and Russell Westbrook. That's how '17.6 minute per game Derek Fisher' happened in 2014. Thabo Sefolosha, formerly an uber-reliable 3-and-D type, saw his three-point shot vanish as his percentage dropped more than ten percent to 31.6%. Even Jeremy Lamb who looked so great for the first two months of the season disappeared after that. For those of you complaining about Lamb not playing in the playoffs, I present to you this graph of Lamb's shooting on a month-by-month basis: 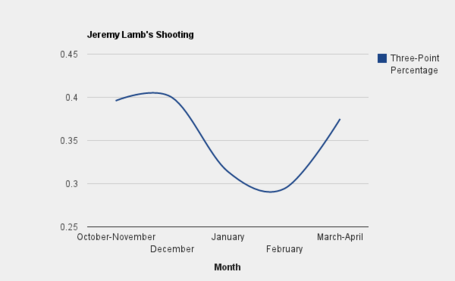 After cracking 40% early in the season and shooting well enough to earn a three-point specialist label, Lamb regressed and then declined into the netherworld of three-point shooting percentages. For context, league average on three-pointers this season was 36.0%. The percentage picked back up a bit near the end of the season, but Lamb was mostly out of the rotation by then and he barely scraped league average. There wasn't enough there to justify playoff minutes, which can be difficult for young players on the cusp of their team's rotation to earn.

Derek Fisher is hardly an option in the starting lineup, so after shortening Sefolosha's leash more and more as the first round progressed, Brooks eventually pulled the plug on him and sent in Butler. Coming into the playoffs, there were mixed opinions on him. J.A. called him 'a larger version of Fisher', which is probably not a good thing to be called. That said, he shot 44.1% from three in the regular season and then shot 8-of-20 (40%) through the first five games of the playoffs.

The single best thing about Butler now versus Butler right after the Thunder signed him is that the Thunder aren't feeding him isolations anymore. He's prone to crappy shot selection, mainly semi-contested step-back pull-up jumpers from midrange. (I once made a Tuff Juice joke and gave Butler a Tuff Twos nickname which I'll forever be proud of.) Take shot selection out of Butler's hands and just tell him to space the floor, and he can be pretty effective as a spot-up shooter.

Getting that spot-up shooter in the starting lineup has proven to be invaluable for the Thunder, as Durant and Westbrook found themselves with a lot more space to work below the free throw line. Defenses love to crowd Durant and Westbrook on isolations or drives, and Westbrook especially can get out of control when he barrels into the lane. Both are a bit more trigger-happy than ideal when multiple defenders come in on them, and without a true catch-and-shoot specialist in the starting lineup, they get put in situations where they tend to make inefficient decisions quite often. Put Butler in there alongside a midrange paragon in Serge Ibaka (not as effective without a three-point specialist around him), and the needle swings dramatically.

This especially is where the 'correlation does not imply causation' thing comes into play, but after sub-40% shooting from the field in four of their first five games against the Grizzlies, the Thunder shot 49.3% and 60.9% in Games 6 and 7. Part of that was KD finally figuring out Tony Allen and Russ finally getting under control, but Butler definitely contributed to the effort by virtue of floor spacing alone. Compare the respect that Grizzlies defenders show to Butler and Sefolosha, and you can see how much more the former helps:

The main thing you lose from Sefolosha by switching to Butler is defense, which isn't an issue with the Thunder chock-full of plus defenders and definitely not against a Grizzlies team that often struggles on defense. I am a bit surprised that Brooks has taken Sefolosha out of the rotation altogether, as he was a DNP-CD in both of the games Butler started. Sefolosha's shot fell apart, but it's not like he's a bad player. That's not a huge sticking point in the long run, though. Sefolosha's minutes mostly went to Reggie Jackson with some going to Fisher, and that's perfectly acceptable. Again, the Thunder are chock-full of plus defenders so the need for Sefolosha isn't huge.

With the Thunder playing Game 1 of the playoffs' second round against the Los Angeles Clippers on Monday, there's been no report indicating who starts between Butler and Sefolosha. It's possible that playing Butler was just a matchup-based decision against the suffocating Grizzlies defense. With Brooks deciding to take Sefolosha out of the starting lineup instead of simply slashing his minutes Perkins-style and also removing him from the rotation entirely, it's very likely Butler sticks. That's probably for the best. The Clippers weren't an elite defense, but they were top-10 in the regular season in defensive rating. Defensively, Butler can be hidden on a guy like Matt Barnes, but J.J. Redick will make him work.

The big deal here isn't simply about getting a shooter in the starting lineup, though. It's just as much about Brooks finally making a change to his starting lineup after multiple seasons of sticking with the same group where available, and adjusting in the moment where it mattered most with the Thunder down 3-2 in the series. The fact that his decision helped the Thunder win the next two games will stick with Brooks, and maybe we'll see him be a bit quicker to adjust the next time his team faces adversity.