Kevin Durant's ball and chain, Tony Allen, is behind him. KD's postseason just got a lot more interesting.

The tough times are over...for now.

The Oklahoma City Thunder escaped the hardships a Game 7 has to offer and like Red from Shawshank Redemption would say, "The Thunder crawled through 7 games of crap and came out clean on the other side."  OKC came out alive on top to an under seeded Memphis Grizzlies team.  How did the Thunder do it?  It is plain and simple.  They played something called team basketball, a lost art in the NBA today.  Every player filled their role and with a little luck from the basketball gods, were able to turn a suspension to Zach Randolph into an extreme advantage.  But my inner voice tells me that even with Zach Randolph on the court, OKC would have still pulled out the win.  Through blood, sweat, and tears (both of sadness and joy), Loud City completed part 1 of their road to the Finals and now will face a tougher challenge.

The Los Angeles Clippers will be the next team up to bat to take a swing at the second seeded Thunder.  What the Clippers have in store is far more superior than the Memphis Grizzlies.  Two high-flying big men and the best point guard in the world man the floor for LA, to go along with solid role players and a future Hall of Fame coach.  But what they don't have is the key to beating the Thunder.  They lack a defender ready to lock down Kevin Durant.  It was Tony Allen last series, and if the Warriors had advanced it would either be Andre Igoudala or Draymond Green, but the Clippers?  Don't get me wrong, the Clipper are a solid defensive team, ranking 7th in defensive efficiency, but that efficiency comes from mostly Deandre Jordan and Chris Paul.  No player on the Clippers has the defensive capacities capable of containing Kevin Durant.

At small forward for LA is Matt Barnes, who, while scoring efficiently last series vs. the Warriors, did not have such a solid defensive effort.  He allowed his assignment, Andre Igoudala, to score points WAY over his season average.  As the best defender at small forward for the Clippers, Barnes's next assignment will be to force the best scorer in the world to take rushed shots and score as little points as possible.

In 4 games vs. the Clippers, Durant has averaged 32.5 points and 8 assists.  Most of these points were scored on none other than Matt Barnes.  Barnes fell victim to boatloads of Durant points; remember this one?

Throughout the season, Barnes has excelled on some aspects of defense, but the pick and roll is not one of them.  On multiple plays, Barnes has tried to double team the ball handler after the screen but loses his man.  In this play, Barnes makes the dumb decision to leave Durant and double team the offensively lackluster Thabo Sefolosha, leaving Durant wide open. 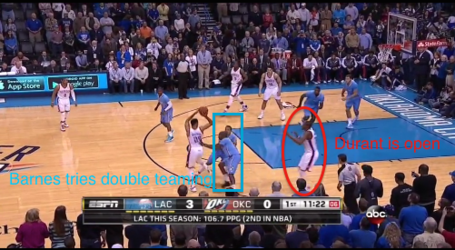 Barnes can be beat through isolation as well.  Barnes lacks the speed and power that Durant holds in his iso.  With a simple crossover, Durant will be at the rim with Barnes trailing behind, like in this play.

No worries about Draymond Green.

Just Matt Barnes and lots of points to come from KD.