The Thunder were facing virtual elimination and another game without Serge Ibaka. Then both of these things got turned on their heads.

The Oklahoma City Thunder defeated the San Antonio Spurs in game 3 of the Western Conference Finals, 106-97. After losing the first two games of the series by an average of 26 points and looking like they had already quit, the Thunder returned home and found a surprise waiting for them. Serge Ibaka, who it was thought would be lost for the rest of the playoffs after suffering a calf strain in game 6 vs the Clippers, returned from injury to start in game 3. His presence, both in the form of his own defense as well as acting as a rallying cry for the OKC defense as a whole, was the big difference in the game as the Thunder were able to slow down the Spurs attack for the first time, holding them to 39.6% shooting from the floor.

Ibaka anchored a defense that finally looked like it had an idea of what was going on, and his 15 points on 6-7 shooting to go along with 7 rebounds and 4 blocks was a welcome sight. His teammates were energized along with him, and Kevin Durant and Russell Westbrook combined for 51 points, 18 rebounds, and 10 assists. Furthermore, the Thunder role players showed up for the first time, led by Reggie Jackson's calm 15 points, 4 rebounds, 5 assists, and a steal.

The Spurs were led by Manu Ginobili, who finished with 23 points, including 6-9 shooting from 3-point range.

The despondency of the Thunder after game 2's debacle was palpable, as they gave up the ghost early on in the fight and limped to the end. Fans all but wrote off the Thunder, realizing that San Antonio's brilliance in the first 2 games was too much to overcome. All that changed when the groundswell of the possibility of Serge Ibaka's return washed across the news landscape. As one twitterer quipped, "do we fire the Thunder doctors or give them a raise?" It was one of the more peculiar injury stories I've seen, as Ibaka went from "out until next season" to "starting game 3" in a matter of about 48 hours. It is a puzzle that may never get sorted out, but the result was that the Thunder found a defensive focus and intensity that not only was missing up to this point but many questioned if it could even be recovered.

How much does Ibaka's presence matter? Well... 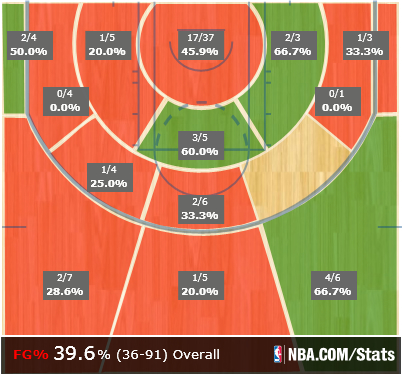 The Spurs' 45.9% shooting at the rim is a stark contrast from their game 2 number of 65% on almost the same number of shots. The 3rd quarter in particular is where the Thunder defense began to really exert itself, as Ibaka and rookie Steven Adams combined to send away a number of shots at the rim that were killing OKC in games 1&2.

Aside from the increase in defensive focus, the other aspect I found interesting is that by and large, the Thunder's superstar duo of Kevin Durant and Russell Westbrook had an uneven game. Yes, they combined for a 51-18-10 and their defensive intensity was admirable, but each guy only shot 8-19 from the floor and had 9 combined turnovers. It was hardly an "A" game from either, but in reality it is actually quite similar to how the pair played against the Spurs during the regular season. In the Thunder's 4 wins, neither one erupted to their full potential; rather it was the Thunder defense and secondary players like Ibaka and Jackson who propelled the Thunder to the win. So it was again tonight.

Also, I think Westbrook is looking to try out in for a villain role in a Bruce Lee remake or something.

We can throw out the standard platitudes - the more desperate team usually wins, they were inspired by Ibaka, the defense found its footing, etc. What might get lost in all of this is the fact that once again, Brooks surprised us all by trusting in youngsters to keep the train moving. He inserted Reggie Jackson into the starting lineup along side Westbrook for the first time in his career (Thabo Sefolosha got a DNP), Steven Adams continues to make great strides against the Spurs front line of Tim Duncan and Tiago Splitter, and lo and behold, WTLC actually made a bona fide accurate prediction and Jeremy Lamb made an appearance in the first half, playing his first meaningful minutes in about 2 months.

Reggie Jackson, Spurs Killer, had his best game of the series so far, but it went beyond simply scoring points. He looked entirely comfortable attacking the rim against the Spurs' secondary perimeter players such as Patty Mills, often times toying with the defense as he worked inside and outside, looking for seams to exploit. I believe that his presence also had a calming effect on Westbrook in the 2nd half. Russ was a bit wild in the first half before draining back to back 3-pointers to close out the 2nd quarter, but settled in and began to work the angles to his advantage in the 3rd, scoring 10 points. With Jackson able to handle point duties and being fully capable of setting up teammates, it is as if Westbrook feels less pressure to be a Mr. Everything on each possession and as a result slows down and makes better reads.

I don't think this can be written enough, but Steven Adams is a rookie. A rookie. Maybe this does not mean much to non-Thunder fans, but for those of us who have followed Scott Brooks for a length of time, this is a complete anomaly that he would trust in the Kiwi to play, not just against some random front line in February, but against Duncan and the Spurs. Brooks trusted Adams to stay out of foul trouble, and he did it while still blocking 4 shots. He was active on the glass, and it does not appear that the Spurs can match his quickness and strength down low. If Adams ever really learns how to finish around the rim and hit a free throw, look out league.

Lastly, Lamb(o!) is getting minutes, and we few, we merry few, are getting some vindication. Lamb only finished with 6 points on the night, but he played 13 minutes in the 1st half and was a more useful piece than any other Thunder perimeter player not named Jackson. What sets Lamb apart is that the defense knows it has to account for him. They can't just leave him alone like they do with Sefolosha and even Fisher at times. By remaining a threat, Lamb does a great job in providing extra spacing for the Thunder offense to flow.

What was a key turning point to understanding the game?

Spurs fans are going to be rightly annoyed at the refereeing in this game, as the Thunder wen to the FT line in the 3rd quarter 22 times. That is...a lot. Furthermore, the Spurs were not getting the same calls at the other end, which resulted in a wide disparity of 31-16 free throw attempts on the night. We've certainly seen this statistic cut both ways, and really all we want is consistency of calls. What I'd offer in the Thunder's defense was that Durant, who struggled from the floor shooting only 1-7 in the quarter, and Westbrook, were far more aggressive than they had been at any point prior in the series.

Also, their defense worked to set a physical tone early in the game, and this time they never let up on it. I felt like they took a page out of the Grizzlies' defensive strategy playbook, where they establish what is going to be called early, but then over time slowly increase the physicality so that they are able to get away with even more later in the game. By contrast, the Spurs don't play defense this way, so when they did foul, it seemed as a greater contrast.

Lastly, there was a crucial turning point early in the 4th. The Spurs were dancing around a 2-3 possession deficit and had the ball looking to cut into a 9 point lead. They got Mills a clean look at a corner-3, and as it splashed in their deficit appeared to be only 6 points. However, the ref waived off the shot and ruled that Mills had kicked out his leg, tripping a closing Durant. Here is the play:

Here is what has been dubbed the "Reggie Miller Rule:"

Also, officials will emphasize the "Reggie Miller rule" for a shooter who kicks his legs out during jump-shot attempts to create contact and draw fouls. Officials plan to call offensive fouls on shooters who blatantly kick out their legs to initiate contact.

Did Mills intentionally kick out his leg to draw contact? I would say, 'no,' because he doesn't necessarily even know Durant is closing on him, and it looks like the foot is just part of his follow-through. That said, the refs are judging what they see, not what they think the player's intent is, and he clearly kicked his leg, which created contact. Offensive foul. I am not sure however if the basket should have been waived off. Since the contact came after the shot, there would be support (and TNT announcer Steve Kerr brought this up) that the foul should stand but so should the shot.

After the ref waived off the 3, the Thunder proceeded to go on a 10-2 run, pushing the lead to 17. It wasn't curtains quiet yet, but that run put the Thunder firmly in control.

The Thunder now trail the Spurs in the series, 2-1. They are still behind the 8-ball, and a regression in game 4 would likely render tonight's emotional win moot because it would mean that the Thunder would have to win 3 of the next 4 games with 2 of them on the road, a near-impossible task.

What matters too is in what shape Ibaka will be in. It is possible he was going on pure adrenaline tonight, but what about next game? Or the game after that? We saw how dearly important Ibaka is to the Thunder's defensive identity, and if he cannot go the way he did tonight, this game becomes mere footnote.

Also banged up on the night were Derek Fisher, who had to get stitches in his noggin, and Manu Ginobili, who suffered a minor foot injury. Spurs coach Gregg Popovich, even in the loss, had the zinger of the night:

Popovich: "Make sure Sammy gets that one."

We'll leave you with this, Durant's comment about watching his teammate Ibaka come back in game 3:

Russ would run through a wall for his team, and Ibaka wouldn't be far behind.