There are times when it feels like Kevin Durant and Russell Westbrook can take over and win games single-handedly. This series against the San Antonio Spurs isn't one of those times.

There was a point early in the season when it felt like the Oklahoma City Thunder were a really deep team. Deep enough that, in fact, they didn't have enough room in their rotation for everyone that we wanted to see. The starting lineup of Kevin Durant, Russell Westbrook, Serge Ibaka, Thabo Sefolosha and Kendrick Perkins was constant except for injuries. Behind them, the Thunder had Reggie Jackson, Jeremy Lamb, Nick Collison, Steven Adams, Derek Fisher and Perry Jones III. The team seemed to be 11-deep and employing a 10-man rotation (PJ3 only appeared every other game or so), a sign of luxury in depth. That was all before Caron Butler signed, too.

That lasted for about fifteen or twenty games before things began to go awry. Lamb stopped hitting his threes, and Jones' flashes of productivity in limited minutes started to disappear. Injuries struck Sefolosha and Perkins after the All-Star break, and the rest of the supporting cast hit rock bottom altogether. Jones and Andre Roberson both failed as Sefolosha fill-ins. Fisher and Butler joined Lamb as inefficient shooters (and often plain chuckers).

Maybe that was an early sign of how easily an injury can throw the delicate equilibrium of the Thunder's supporting cast, formed of an awkward combination of veterans and inexperienced players on rookie contracts, into disarray. Kevin Durant and Russell Westbrook can do a lot of things, but now with Serge Ibaka out, the rest of the team is showing again they can't step up to the plate in case of emergency.

If the Thunder hit rock bottom back in March when Sefolosha and Perkins went down, they went "underground nuclear bunker" last night. There was no greater reminder of how much the Thunder's support had collapsed than in the 16-minute and 8-second stretch through the second and third quarters of Game 2 where nobody other than Kevin Durant and Russell Westbrook managed to score a single point. I grabbed ESPN.com's GameFlow chart for the game and highlighted that time frame: 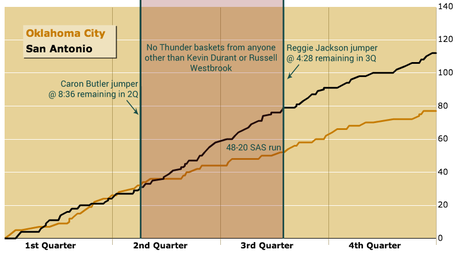 Until that point in the second quarter, the Thunder had actually been hanging tight with the Spurs. However, when the role players disappeared, it didn't take long for the Spurs' defense to adjust their attention off ineffective bench guys and on to Durant and Westbrook. The effect from that was obvious. It wasn't one of those stretches where Durant and Westbrook dominated their opponents, but out of necessity, they had to dominate the Thunder's scoring. Durant shot 3-of-9 for 6 points and Westbrook shot 6-of-15 for 12 points in that range, while the Thunder shot 9-for-27 as a whole.

As the Thunder fumbled around on offense, the Spurs went on a 48-20 run that decided the game. Durant and Westbrook can do a lot of things, but they can't win 2-on-5. Some of the blame falls on Scott Brooks' shoulders, because it's pretty inexcusable to be trotting out lineups without either Durant or Westbrook at this stage of the season. If fatigue is a concern, then don't play both guys for the entire first quarter.

Still, the lack of bench support is too glaring to not blame at this point. As valuable as he is, the loss of Ibaka shouldn't precipitate two blowout losses in the Western Conference Finals. Yes, Ibaka's absence has been felt as the Spurs have targeted the Thunder's soft underbelly in the paint. Yes, his reliability on midrange jumpshots has been missed. But he isn't the reason the needle has swung so much towards the Spurs' favor. In fact, I would argue that the Thunder's defense has been much better than their offense in the stretches that they've looked good (the third quarter of Game 1 and the first quarter of Game 2), and that a frustrated offense led to a disinterested defense.

Here's a table of the postseason point-production of the seven Thunder players other that Durant, Westbrook and Ibaka that have played at least 150 minutes (this is arbitrary, I'm just picking the guys that have consistently been in the rotation):

Apart from Reggie Jackson, you just don't have anyone producing in volume (per-minute or per-game) and consistency at the same time. Granted, some of these guys aren't built for or assigned to scoring roles. Adams, Perkins and Collison aren't expected to bring a whole lot of points to the table directly because they don't have the skillset for that. But the fact that nobody is producing points hurts.

The perimeter trio of Butler, Sefolosha and Fisher has been a complete failure, and it's the factor related to the Thunder's bench that hurts them the most. The idea of going small looks like a bad idea in retrospect now, with the way the Spurs have beat the Thunder up right now. However, if the Thunder's small lineups could actually have taken advantage of greater perimeter skills to outscore the Spurs and forced them to also go small, maybe things would be different.

There's no chance of that right now, because right now, the Thunder aren't gaining anything when they go small. Sefolosha and Fisher are both in the mid-20% range of three-point shooting (nuclear bunker bad), and Butler has regressed to a below-average 0.333 three-point percentage in the last two rounds since shooting well in the first round.

Spacing has been a problem all season long because of inconsistent perimeter shooting, and that's on full display now. Between the ineffective trio of catch-and-shoot perimeter players and the invisible scoring presences of the big men, the Spurs can basically concentrate their entire defense upon Durant and Westbrook. As if scoring on Popovich's defense wasn't hard enough already.

THE SPURS CAN BASICALLY CONCENTRATE THEIR ENTIRE DEFENSE UPON DURANT AND WESTBROOK. AS IF SCORING ON POPOVICH'S DEFENSE WASN'T HARD ENOUGH ALREADY.

Even Reggie Jackson, Spurs killer in the regular season, can't do enough by himself to take the heat off his superstar teammates. Jackson's been extremely efficient in two games against the Spurs and generally looked good, but he hasn't been great in a situation where the Thunder need great to make up for missing impact elsewhere. He's struggled to create a volume of shots with the ball in his hands and while it may just be a case of not getting enough touches to establish a feel for his opponent (I don't even want to know why that would be the case, but we should probably get the ball out of Fisher's hands), but the bottom line is that he isn't attacking enough to cut it.

The lack of a scoring impact from any of the regulars has led Brooks to test Jeremy Lamb and Perry Jones III. It was worth a try, but not surprisingly, neither made much out of their opportunity. They faded from the rotation long ago, and just don't have the skill to be playoff contributors at this stage in their careers.

There are some bright sides for some players outside of offense, sure. Adams, Collison and even Perkins have been good on defense, especially in those aforementioned stretches where the Thunder have mounted comeback runs. But they aren't Ibaka on either end, and all of them have had their shortcomings (inexperience, size and perimeter mobility respectively) exploited by the Spurs.

It's not clear if there's an answer. Ibaka's injury has shaken this team so much and placed such a need for the role players to step up, but they've disappointed about as much as you possibly can. Maybe Brooks can make a few lineup changes: replace Sefolosha in the starting lineup with Butler and/or Perkins with Adams, increase Jackson's touches and minutes, and perhaps continue exploring the end of the bench if necessary. I mostly mean Lamb and Jones with the last one, but Hasheem Thabeet is a nice guy.

For what it's worth, Brooks did try getting creative with a big lineup in that stretch where the non-Durant/Westbrook offense flopped. He went with a fascinating Westbrook/Jones/Durant/Collison/Adams look for about two minutes of the second quarter. Predictably, it didn't help take any of the heat off the Thunder's stars and it probably won't see a second look in these playoffs despite moments of sturdy defense. But hey, a lineup where four guys are taller than 6'9" and all of them are either freakishly athletic or bulky was worth a look. Maybe more mixing and matching uncovers something that works.

Still, adjusting at the fringes doesn't feel like it'll make enough of an impact at this point. Durant and Westbrook are the Thunder's key to winning, but they have been absolutely swarmed and this roster doesn't seem to offer the tools to fix that anymore. It feels like the only hope the Thunder have now is to pray that some of their shooters start turning it around. The fact that Brooks has already reached for PJ3 and Lamb, the former also seeing time in that weird big lineup, by Game 2 of the Spurs series speaks volumes about how desperate he is to find something that works.

This is the risk you run by paying three of the NBA's stars nearly $45 million together. The rest of your team is made up of veterans playing on budget contracts and young players on rookie contracts (and of course, Perkins at almost $9 million). Nearly two-thirds of the Thunder's total salary expenses go to three guys alone and the rest of the guys on budget or rookie contracts are counted on to really step up, especially in the case of an injury. Usually teams will hit on a few of those low-end contracts and find cheap contributors, which can justify paying the all-important stars the big money. It looked the Thunder had those guys at the end of the season, but none of them after Reggie Jackson are making a difference now.

Without Ibaka and without any other role players making their impact felt, the Thunder might be boxed in already against one of the NBA's best teams. Maybe it requires a bit of blind faith now. The Thunder were 10-4 in March during the Perkins/Sefolosha injuries. Ibaka is a bigger loss, but Durant, Westbrook and some rediscovered outside shooting can reverse that quickly. Hello, talent and irrational confidence basketball. With a few extra days off to find themselves again, the Thunder will be counting on any one of their role players to turn it around and contribute.