The Thunder still can't protect the paint, and now they can't score. What went wrong? We dissect the problem from inside and out.

This game seemed normal enough at first. KD and Westbrook were leading the team's first quarter charge, with absolutely no help from their starting compatriots. The Spurs made mincemeat of the Thunder's interior D and drew Nick Collison into two quick fouls, forcing Steven Adams into the game early. Adams quickly made himself useful to the Thunder's predictable offense, grabbing two offensive boards and converting them for points. Reggie Jackson came right behind as a replacement for Sefolosha, and even Caron Butler was able to chip in a few points. By the end of the first quarter, it looked as if the Thunder were well on their way to challenging the Spurs.

That dream was short lived into the second quarter, though. The Thunder were playing a lineup bereft of KD or Westbrook, and they were having a seriously difficult time nailing down shots. They held their own defensively, but quickly got themselves into foul trouble. As such, the Spurs were in the Bonus with only 6:18 to go. Meanwhile, the Thunder were experimenting with having Perry Jones III at power forward, despite him not having played serious minutes since Caron Butler signed with the team. PJ had a couple of nice defensive stands initially, but Pop was quick to counter by subbing in Splitter for Diaw. The Spurs quickly took advantage in the paint and on the boards, continually dominating Jones and whatever poor center had to try and cover for him.

Despite the mess I've described, the Thunder had a seriously legitimate chance of getting out of the first half relatively unscathed. OKC's offense was still serviceable, as the role players and some crazy transition heroics were still producing a few points. A Westbrook spurt got the Thunder to within five with only 2:35 remaining in the first half. As was well noted by TNT's Charles Barkley, this is an easily manageable situation if a team can just play good defense and run down the clock. But Oklahoma City was literally so reckless that they managed to dig themselves into a 14 point hole by the time the half rolled around. And none of that end run was fueled by the fact that San Antonio was in the bonus.

So, at halftime, San Antonio had a pretty dominant attitude. They had beaten the Thunder in several different aspects of the game, and had produced a 25-8 run to close the first half. Seeing this, Brooks chose to go with the starters, seeing as how they had performed admirably out of the gate. The only problem with this is the lineup's complete reliance on Westbrook and Durant offensively and their lack of athleticism defensively. San Antonio was able to force Westbrook into a few bad possessions, as well as pressure Sefolosha into missing some really easy shots. As you can imagine, San Antonio's lead grew quickly, and only exacerbated itself as Brooks attempted going small with the defenseless Butler as power forward. By the end of the third, most of Oklahoma City was cursing Derek Fisher and watching the Spurs throw a lot of fundamentally sound passes.

The fourth quarter was nothing more than a show, or farce. Jeremy Lamb was the team's Garbage Time All-Star, working well within the flow of the Thunder's offense. The rest of the team was atrocious, scoring exactly two points in the fourth while the Spurs pounded the ball into oblivion. Even Lamb's points were a bit of a joke, as neither Splitter nor Duncan saw the floor in the fourth.

Would the Thunder have won this game with Ibaka?

Probably not. I could see Ibaka making this game more competitive in the third, providing a really big offensive boost when guys like Sefolosha were bricking jumpers. He also would have been pretty awesome to witness in the second quarter, when the Thunder's interior D was getting ripped to shreds. But even at maximum effectiveness, it doesn't make up for the 29 points OKC was down at the end of the third. Furthermore, he would have probably exacerbated the Thunder's foul trouble, and he couldn't have done anything about Danny Green's performance from three. Speaking of....

Who's to blame for Danny Green going off?

Well, two things. The first is poor perimeter defense from KD and Butler. KD is capable at that position,but was likely tired from taking 16 shots, dishing two assists, and turning the ball over twice in just 24 minutes of play. It might not sounds like a lot, but that's a high usage rate. Butler is simply too old to guard the line effectively on a consistent basis. The other thing you can blame for Green's success is the poor transition defense that we'rs still seeing from this team. I don't understand how dudes who have played with each other for 4 or 5 years still manage to miss their assignments as they run back up the court, but it seems to be a regularity with this team.

Who's to blame for the Thunder's problems in the paint?

I don't think there's a clear-cut answer to this one. I definitely blame Perry Jones for the rebounding and interior D problems in the second quarter, though he had his work cut out for him against Splitter or Timmy D. I also blame Perk for racking up 4 fouls in just 14 minutes of play, with nearly all of them being completely avoidable. Had he been able to play a few more minutes and kept the Thunder out of foul trouble, things could have been different. I'd also point somewhat of a finger at Adams, who I saw fail to provide help defense against a driving guard on more than one occasion. I don't really remember much of what Nick Collison did, but I wish that he could be more of a matchup big man that's focused on shutting down Duncan or Splitter, rather than a utility big man that needs to protect the paint.

Why is Russell Westbrook so streaky?

I wish I knew. His second quarter was really solid, and he almost single-handedly willed the Thunder back into this game. But his first and third quarters were complete rubbish offensively. In the first, Westbrook really tried to use his size and quickness to his advantage against Tony Parker, spotting up from wherever. Russ couldn't seem to find the rhythm on his jumper though, and didn't succeed until the second quarter. There, he was able to get a few more plays in transition, as well as draw easy matchups against Manu Ginobili and Danny Green. The third saw a return to Westbrook's struggles though, as he just couldn't find any room in the lane against Tiago Splitter and Tim Duncan. Russ's shot became worse and worse, to the point where Pop just put a bigger guard on him and dared him to shoot. Eventually, Westbrook left the game in disgrace.

Does Kawhi Leonard have KD's number?

I wouldn't say so. Leonard does have the ability to get in KD's face and did contest a few shots. But more often than not, KD was missing shots of his own accord. I'd say the bigger factor in KD's bad game was his inability to get to the line. His 5 trips to the line tonight and 4 trips to the line two nights ago are the lowest totals of his entire playoff run. Another huge factor in KD's sub-par game was the absence of Ibaka. Ibaka's presence as a shooter forces the Spurs to send a man to cover him away from the paint. Perk, Collison, and Adams simply don't hold that same threat. So whenever KD has to go against any defensively imposing frontcourt, it's really hard for him to make any significant progress. 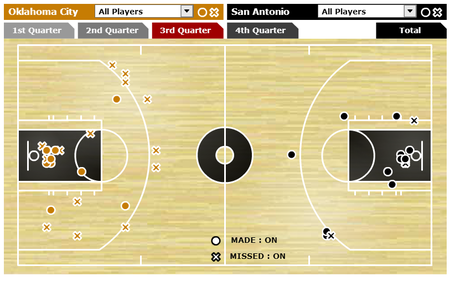 That says it all, really. The Spurs absolutely obliterated the Thunder in the paint during the Third, as OKC simply couldn't hold their own with Kevin Durant and Caron Butler at power forward. Meanwhile, OKC's offense was content to take as many threes as they wanted, but nobody had the hot hand.

Can OKC come back and win this series?

Of course! This win was pretty demoralizing, but the issues didn't look game-breaking or unsolvable. The team's priority should be deciding whether to punish the Spurs on the perimeter with a small power forward, or trying to defend the paint and contain Duncan/Spliter with a big power forward. If they don't exploit one of those holes, they might as well be toast. OKC also has to find a way to get offensive production from other players while Westbrook and Durant are on the floor. Seeing these dudes tire out early is no fun, especially when both of them are locked into a game of mental chess with Pop's cross-matching. Lastly, the Thunder need to make sure that Russell Westbrook never guards Tony Parker again, because he loses TP entirely too much.

Thunder Wonder: Reggie Jackson, who was as solid as you can be in a loss.

Thunder Down Under: Caron Butler, if you can overlook his horrible post D.

Thunder Plunderer: Tony Parker, who is too clever for everyone on our roster.

Thunder Blunder: Russell Westbrook, who made another lifetime's worth of bad decisions and still needs to powder his hands.

Next Game: At Home on Sunday at 7:30 Central Daylight Time.