2014 NBA Playoffs: Fraternizing with the Rock in preparation for game 2 between Thunder and Spurs

What go through the minds of the respective managing editors of the Spurs' site Pounding the Rock and WTLC? Wonder no more.

Share All sharing options for: 2014 NBA Playoffs: Fraternizing with the Rock in preparation for game 2 between Thunder and Spurs

This conversation between Pounding the Rock's J.R. Wilco and yours truly began after the Spurs defeated the Portland Trail Blazers in five games. It began via text and ended via email exchange prior to Game 2 between the Thunder and Spurs.

J.A. Sherman
Poor Trail Blazers. I feel kind of bad for them. They have the collective look of a guy who walks out of the diner to slowly come to the realization that his car has been stolen.

J.R. Wilco
What an analogy. Why stolen car?

There was one photo of a bunch of them leaning on the scorers table looking like they just watched a sinkhole devour their new SUV. 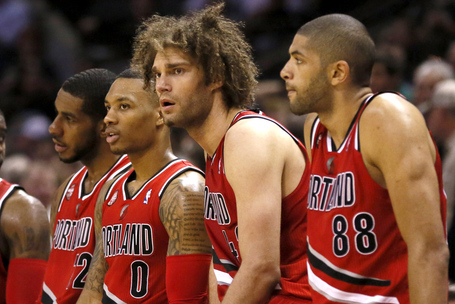 JRW
I feel like they're a group of people who decided to climb Everest, got 15% of the way up the mountain before the weather turned, their gear fell down a crevasse, half of their supplies turned out to be tainted and unusable, a couple of them were injured in a fall and they decided to pull back. Before they make their final descent from the base camp, they turn and stare admiringly at the mountain: knowing they're been defeated by a worthy foe, but loving it for its challenge and beauty.

Sherm
Right. And after the final descent: "Dame, didn't you park the Winnebago right over there when we arrived?"

JRW
Man. You're just piling it on. I replaced your diner with a mountain, and you STILL have their car stolen afterwards.

OK, if that describes the Blazers, then who are the Clippers?

How about this: Los Angeles is a family who have just moved into a new neighborhood they're really excited about. Great parks and amenities close by. AND it has a neighborhood watch. But everything turns sour when the men in the neighborhood watch break into the house and hold the family hostage and rob them blind. It takes them hours to get out of the chairs they've been tied to and they're emotionally drained because they've been violated by the very people who were supposed to help them.

[Then the Thunder eliminated the Los Angeles Clippers. And PtR posted this story.]

Now, tell me how you really feel about Russell Westbrook.

JRW
Oh, man. Yeah, I guess it's best to clear that up right away.

First, let me say that I think he's an amazing talent, a fantastic athlete and a superstar basketball player. No, there's no "but" coming. That's it.

Second, he's an opponent of my favorite team -- a guy whose awesome plays helped to eliminate my team two years ago. I don't consider myself a fan of his.

Third, unlike some guys on the Thunder (Kevin Durant, Reggie Jackson, Thabo Sefolosha, Nick Collison) Westbrook really rubs me the wrong way. A significant amount of of my dislike for him stems from the fact that I don't ever remember seeing him smile on the court. Every big play, every spectacular shot he's made -- that I've witnessed -- has been accompanied by a scowl, sneer or a stare. Even when he celebrates, it's always with a roar or a shout. There's nothing necessarily wrong with that, it's just that it makes it hard for me to like him as a player.

And that's the reason I didn't have a problem running the story about Westbrook interspersed with all of those images of him in full swag mode. It's the way I see him as a player. Now, once you guys posted your response post, I learned about the charity work that he does (and organizes himself, apparently) and I saw him having a great time with the kids he's helping. It was the first time I'd seen any other side of him and it made me feel very different about him -- as a person. The player is still nearly impossible for me to support, but knowing that about how he gives back off the court definitely helps.

Finally, I've heard from multiple people who took exception to the story, that they never finished reading it. And I understand that all of the images would have made it difficult for a fan of Russell's to make it all the way through the piece, so here's an edited version of the ending, just for anyone who thinks that PtR or the author set out to to a hit piece on the man.

If Westbrook ever figures out how to make good decisions ... then I don't think there's a team in the league that could stop the Thunder.

And in the immortal words of Forrest Gump, that's all I have to say about that.

Sherm
Thanks for your clarification. And for the benefit of your readers and mine, I think it's relevant to note that you and I briefly discussed whether I was ok with a post like that, and my answer was, "I'm totally fine with it." While I think some people can take it too far, I believe that our respective fanbases are mature enough and respectable enough to realize that it's all in the name of good sports fun. I don't know if there are two franchises and fanbases that respect each other more than the Spurs and Thunder, in part because OKC has tried to replicate what San Antonio has accomplished in terms of how to build a team designed for longevity. Unfortunately when we play each other, we gotta act the part.

In defense of Westbrook...you know, there is no defense. Either you try to see him for the entirety of the player and person he is, or you don't. Either way, he doesn't really care. And to paraphrase the great Wayne Campbell, he isn't interested in being the kind of player everybody likes. I mean, Led Zeppelin didn't write tunes everybody liked. They left that to the Bee Gees.

Let's get to tonight's game. The Ibaka thing has been played out; I don't know if there is anything to add to it. I'm going to throw out this morsel and see if you bite. The Spurs' offense is great, the team is great, Pop is great, etc. What if the Thunder win game 2? Does that change our paradigm?

JRW
If the Thunder win Game 2, then everything changes.

Why? Because it would make it impossible for the Thunder to come back to win the series after being down 2-0, like they did two years ago.

To be continued after Game 2.