Steven Adams was all over the place in Game 6. From effective screens to crazy blocks, his contribution was much needed.

Last night, as the seconds ticked off and the Thunder had a 20 point win in a game that could have eliminated them from the playoffs, a win never felt more satisfying.  Kevin Durant shattered the temporary nickname, "Mr. Unreliable." Westbrook controlled his shots to under 25 attempts.  Scott Brooks made the surprisingly out-of-character decision to start Caron Butler in place of Thabo Sefolosha, and was rewarded with Butler's 29 minutes of solid play.  Overall, it was a team win, a term I don't think the Thunder have heard in a while.

For Steven Adams, it was a game to remember.  In the Kiwi's first big minute pressure-packed playoff game, Adams could not have been more intimidating.  He was all over the ball and recorded 5 blocks in 20 minutes.  Loud City could not have asked for a better defensive effort off the bench.  Adams' crazy game may leave Scott Brooks wondering why he hasn't put him in much for the past 5 games.

Offensively, Steven Adams went 1-2 from the field, but his one field goal got everyone on their feet.

Adams' alley-oop aside, it was actually his screens that helped the 2nd unit offense.  Funaki was involved in lots of pick and roll plays.  Adams set hard screens allowing separation.  It kind of helps when you have a 7'1'' frame.  In the first screen, Adams gets Jackson the separation he needs, then he rolls and takes Kosta Koufos with him, leaving Jackson the open shot. 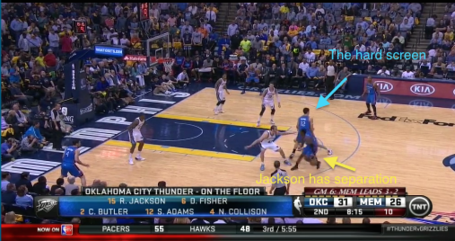 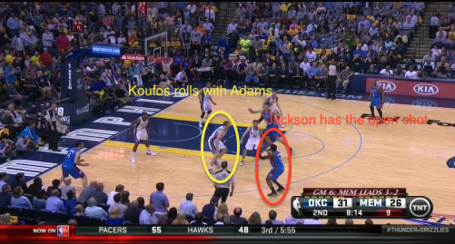 In this next screen, Adams sets a monstrous screen on Beno Udrich, leading to a wide open jumper for Russ. 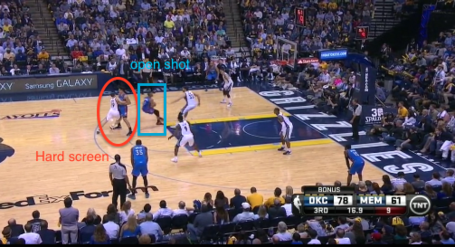 Adams helped out the offense behind the scenes, as well.  He sealed off the paint for players to take it the hoop for the open layup.  He facilitated the ball.  He did all the dirty work, which is why he was brought to Oklahoma.

I thought I was watching Dikembe Mutombo, honestly.  Adams swatted 5 shots and made the Thunder paint look like a pool of lava where no one wanted to step in.  Especially on that one block against Tony Allen.  He nearly broke the backboard.

I bet he was thinking about KD on that one.

Steven Adams is 7-feet tall and from New Zealand, which technically makes him an ent. You need these guys in the playoffs, big, loping tree-warriors with clubs for limbs and a moral code that isn’t quite human. At a moment last night when it looked like James Johnson might single-handedly wrench the Grizzlies back into what had been a ragged blowout — already a phenomenally strange moment in this phenomenally strange series — Adams slowly and calmly went to work razing battlements: five blocks in 20 minutes, along with three rebounds, four fouls, a cathedral bell ringing inside Marc Gasol’s cranium, and at least one stretch when he seemed to have driven Zach Randolph toward a temporary-insanity plea. Well, James Johnson is probably the NBA player most likely to be a secret uruk-hai. So it kind of makes sense.

More importantly, Adams helped hold the Grizzlies' low post beast Zach Randolph to only 2 points on 1-5 shooting the entire 2nd half. Randolph is a tough cover, not just because of his strength, but also his footwork. However, Adams did a great job staying on his feet, waiting for Randolph's move, and then elevating vertically to challenge the shot. Here is Adams' block party: