Just kidding, but he was pretty good against them in the regular season.

The San Antonio Spurs are obviously a great team, and if you asked me at the beginning of the regular season, there's no single team I'd pick to win a seven-game series against them other than the Miami Heat who did it in last year's NBA Finals. Even the Heat, back-to-back NBA champions after that series win, had a pretty tough time against the Spurs. The way this season went for both teams, I'd take the Spurs over the Heat if they met up again in the Finals this year (but of course, that's not what we want to happen). They good.

When the Thunder swept the Spurs in their four-game series this season, it was a total shocker. Even with Serge Ibaka's injury now something to consider, it makes you think again about marking the Thunder for dead in the water.

In those four regular season games against the Spurs, Reggie Jackson had a points per game average of 21.3 and a True Shooting Percentage of 76.4%. Both marks were his highest against any one team this season, and one of the two times he scored his season high of 27 points came against the Spurs. His lowest scoring performance against them was 14 points, and even that is still higher than his total season average of 13.1.

Put differently, Jackson just seems to have the Spurs' number so far in this season. He was the difference-maker in their regular season sweep, and now with Ibaka out, he'll need to step up into that third scorer role for the Thunder to come out on top again.

Can he do it? The playoff Spurs sound a bit more intimidating than the regular season Spurs, even if the former struggled in the first round against the Dallas Mavericks and the latter reeled off a 19-game win streak. Gregg Popovich is the Michael Jordan of coaches, and game-planning against the Thunder becomes an easier task on both ends when they don't have Ibaka. This will have a ripple effect down to Jackson, who becomes cemented as the Thunder's third most dangerous offensive talent in this series. After what he did in the regular season, Popovich will definitely be on alert for him. With the way he's performed this season, Jackson has to know it'll be coming.

It's not anything special to Jackson, though. When he was asked about his Spurs-killing performances against the Spurs earlier in the season, Jackson said, "I just have a tendency to find some holes and weak spots in the defense against them."

Tony Parker and Patty Mills are both solid defenders, but the way for Jackson to find holes and weak spots against them is the same as it was against the rest of the NBA. The substance of Jackson's offense against the Spurs was, unsurprisingly, the pick-and-roll. After a pick gets thrown into the mix, Jackson is great at attacking the big man with a head of steam. Since teams don't respect his jump shot enough to come out and challenge him on the perimeter (and also because Jackson's greatest threat is his dribble penetration), big men will hang back in the lane. For the Spurs, this was the plan with Tim Duncan, Tiago Splitter and the rest of their bigs.

The wrinkle is that even staying back in the lane doesn't always get it done against Jackson. Even if his speed advantage can be neutralized (and this doesn't even always happen), Jackson has the strength to absorb contact and finishes with outstanding touch on floating shots or finger rolls. If he ever gets paid a $10 million contract, at least $6 million of that is for his finishing ability.

Here, Jackson runs the pick-and-roll with Kevin Durant and is able to turn the corner with the second defender Manu Ginobili fully focused on Durant. That leaves him a clear lane to attack Tim Duncan way back in the lane, and Jackson is able to loft in a finger roll through contact.

Here in a more conventional pick-and-roll look with Nick Collison, Tim Duncan sags back into midrange and Jackson takes advantage of his agility by dancing in the lane to create a small gap for a shot.

Ibaka was the Thunder's greatest pick-and-pop threat, and now, the Spurs will have more leeway to concentrate on Jackson as the sole threat out of the pick-and-roll. Steven Adams can't shoot and at times fumbles his finishes as the roll man. Nick Collison will pass out of the play more often than he will complete it. To counteract Jackson's finishing ability, the Spurs will probably keep their big man closer towards the rim and limit the space Jackson can create by going past a big in midrange with a head of steam. As you saw in the first GIF, that isn't always a problem – the Spurs don't have many athletic shot-blockers – but it will be more difficult for Jackson.

The best way for Jackson to counteract that is by forcing the Spurs to respect the midrange jumper that will be wide open. It's the shot the Spurs want him to take because it's the least efficient shot in basketball, but there is a point with open twos where teams will decide they have to stop giving them up.

That leads right into the greatest question mark going into the series for Jackson: whether or not his jump shot shows up. His shot has improved noticeably over the course of the season, but his number one flaw is consistency. His hit-or-miss tendency is noticeable from game to game whether from three or from midrange, and sometimes it feels like whether Jackson is on or not matters more than how much the shot is contested. Up to this point, Jackson has shot 34.9% from three in the 2013-14 regular season and playoffs. Look at the fluctuation in his three-point percentage in individual months (blue line) versus the progression of his total season three-point percentage (orange line). 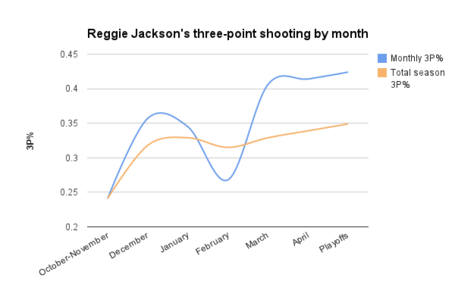 Jackson's three-point percentage has hovered around 40.0% (three-point specialist territory) since March, but even with that as a part of his total season three-point percentage, he still stacks up as a subpar three-point shooter in the end. Part of that is a result of Jackson taking almost half of his total three-point attempts in both December and January, both months that saw him hit his threes at an average rate. For the Spurs, they will have to consider both lines: the blue line indicating Jackson's hot shooting in recent months, and also the orange line indicating Jackson's overall average shooting over a greater sample size.

The regular season might not offer the best peek at the Spurs' defensive strategy heading into this series since three of the four Thunder-Spurs match-ups came before February and Jackson's three-point percentage has spiked since then. But, if we look at the regular season series anyway, it was clear that the Spurs weren't afraid of helping off Jackson then.

On this possession, the Thunder set up a high-post isolation for Kevin Durant against Kawhi Leonard. That's not exactly a bad matchup for the Spurs, but with Jackson in the corner, they decide to shift some extra defensive attention on to KD by taking it off Jackson in the corner. Spurs big man Jeff Ayres comes across the paint to cut off the lane, while Tony Parker leaves Jackson to tag up on Ayres' check.

This was the theme for the regular season, and with offensive talents like Durant and Westbrook, defenses need all the help they can get. Granted, all of this was before Jackson began an extended stretch of above average three-point shooting. With the Thunder having lost one catch-and-shoot threat in Ibaka, much of the defensive attention he would've commanded will fall upon Jackson. The Spurs will definitely regard him as more of a threat from outside now then he was back in December or January, though exactly how much of that will be reflected in their defense is the question.

Whether or not Jackson has the shot going will have major sway upon his overall effectiveness. He's a confident guy, and if he gets going, he's going to start shooting and knocking down the in-your-face shots. If not, we've seen that he's perfectly willing to keep gunning. Again: versus Durant and Westbrook, the Spurs will throw as many defenders against them as they can. Even against Jackson alone, they would much rather play to protect against the drive than the jumper.

With Ibaka out, Jackson will be the X factor in this series. There's no question he's the third most important player for the Thunder now, given his production of late and against the Spurs specifically this season. Three months is long enough that there should be some confidence in Jackson's jumper heading into the series, and that will free him up to do greater damage in the paint. The Spurs-killing can definitely keep living on.

However, the Spurs are going to greet Jackson with much greater defensive intensity than he saw in the regular season, and that may be enough to throw him off. It might be one of the most important narratives on the court to keep track of for the Thunder. Kevin Durant and Russell Westbrook can't do it themselves against the Spurs, and how Jackson operates in their shadow will be a major difference-maker in this upcoming series.