Share All sharing options for: Waking up Caron Butler and Derek Fisher

When it comes to Caron Butler and Derek Fisher, not much has been said over the past few weeks.

Both have surfaced periodically as bit players in a larger playoff picture, hitting a three here or making a critical pass there. Overall though, both of them are a disappointment. They aren't providing the game-changing talent of their youth, nor are they providing stable veteran leadership. Instead, each of them is undergoing their own struggle, posting horrible statistics that would get them benched in other situations.

Before you pile on top of me for excessive hating, check the stats.....

That table is straight up scary. It's true that his production has appropriately gone down with his decreased amount of minutes, but there's no excuse for the percentage that he's shooting. We're 13 games in, and Derek Fisher hasn't shot over 40% once.

Now, I'm not trying to take away from what Derek Fisher has done or can do in these playoffs. He's still as timely and smart as ever, doesn't commit egregious errors, and has done his absolute best to cover shooters by going over screens. And he has had some good moments in these playoffs, most notably in Game 3 of the Grizzlies series. There, he hit a three and assisted on a KD triple to help trigger a fourth quarter run.

Still, Derek Fisher's bark is worse than his bite. He hasn't been nailing shots like he used to, and rarely touches the ball anymore. He's still respected as a shooter, but that's the only thing keeping him on the floor offensively. Defensively, Fisher's best moments have come in the post, as he's stopped the post-ups of men much bigger than he. But, again, that's a lone bright spot in a litany of errors. Fish is too slow to effectively cover the perimeter, and will often get beaten around a screen or fail to cover a weak-side shooter. He knows how to read passing lanes well, but, again, his mind is not connected with his legs.

If that weren't enough, Fisher suffered a shoulder contusion in Game 2. He missed no games because of it, but could be seen writhing on the floor in pain at the time. Furthermore, he's worn a odd compression T-Shirt since the injury, possibly affecting his shooting numbers.

Anyway, that's enough discussion of his problems. Let's get to the solutions.

If there's one thing to draw from in Derek Fisher's past success with the Thunder, it's this: He's an expert at corner threes. He takes a ton of them, and he hits a ton of them. As long as you have this guy lingering on the weak-side, waiting for a pass from the driving ballhandler, he's going to be a huge threat. Also, you can see how his offense became primarily perimeter-oriented as he handed the point guard reigns over to Reggie Jackson in 2013. It's true that he played a bit of PG after Russ' injury, but I'd argue that far more ballhandling went to KD. 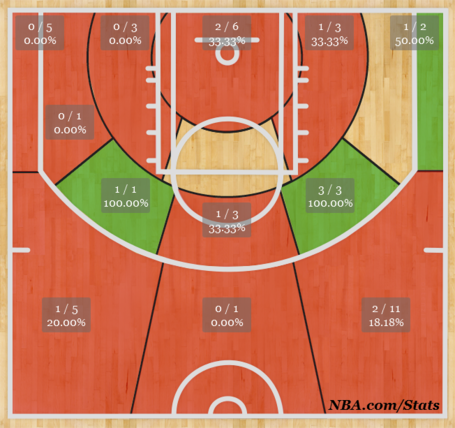 WHAT ARE YOU DOING, DEREK?

Yes, according to this graphic, Derek Fisher has only taken 7 corner threes. By contrast, he's taken 17 threes from the other places, and for some reason has felt a need to bring back the silly floater shot we haven't seen since 2012. I'm sure it hasn't been a conscious decision on his part, but it pretty much wholly explains Fisher's debacle.

Caron Butler is a tougher cookie to crack. As you can see, his field goal percentage is at a low, as is his points production. But he's actually become a much better player from three than he has in the past. What you're seeing is his transition from a ballhandler to a spot up shooter, and it's hard to say whether he's become more or less effective as a player.

However, his playoff stats do indicate that he's been playing at a sub-optimal level for a number of years. Furthermore, the already-present flaws in his game have exacerbated themselves over the course of this run. Caron has lost a ton of his athleticism and is almost never a threat to put the ball on the floor. He's also done a poor job of nailing the stop and pop mid-range jumpers he's so fond of, and very rarely gets the best of his defender in an isolation situation. On the other side of the ball, he's not much help either. I'll admit that I've seen him get a few key deflections that aren't noticed by the average fan, but I'll also say that he's horrible at covering shooters and staying on his man.

If I were coach, I'd probably have never given Butler minutes over Jeremy Lamb. But with Lamb getting nothing more than peanut minutes in the playoffs, it's almost impossible to switch back now. Butler is pretty much stuck on this ship, whether we like him or not.

But, what can Caron Butler do to better his place in Oklahoma City? To be a really legitimate part of this championship winning team?

He can set screens. To illustrate this point, here's two plays involving both Butler and Fisher from the Memphis series that went absolutely nowhere. In both of these sets, Caron Butler does a poor job of hiding his intent to screen. Furthermore, Derek Fisher showcases some poor decision-making, firing up shots from the center of the floor that had absolutely no business being taken. So there's something to be learned on both sides. 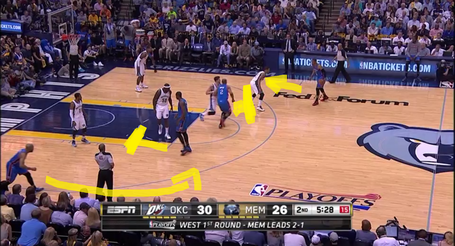 Things start off rather haphazardly. Before I snapped this picture, Ibaka was ordering Butler to move to the other side of the floor and set a screen. By the time he got there, Butler had telegraphed his intentions so clearly that the screen was ineffective. Westbrook just kinda struggled for a few seconds. Meanwhile, Derek Fisher gets a sneaky screen from Ibaka as he moves towards the center of the floor. 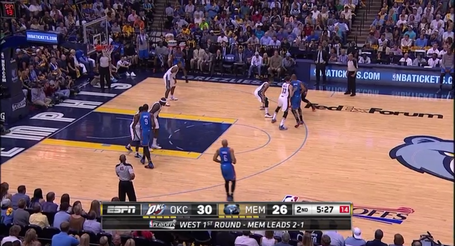 Fisher's play worked, and he pretty much has an open three. But Westbrook doesn't notice, as he's still struggling to get around the screen. 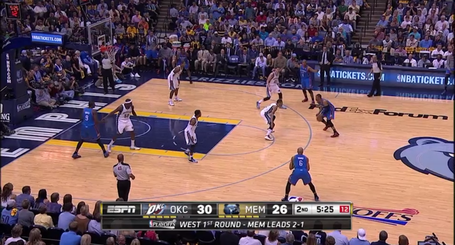 Eventually, things devolve into a Westbrook ISO, and he ends up wildly dishing it to Fisher on a silly drive. 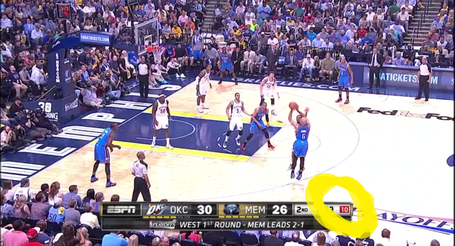 The result is a long, well-contested three with 10 seconds left on the shot clock. Why he chose to take that shot is beyond me. (It's hard to see, but Mike Conley is pretty much on top of Derek Fisher.) 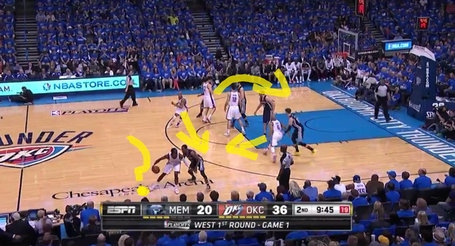 So, here's how it starts. Reggie Jackson brings the ball up the floor, and both bigs set screens for both of the wings. Caron Butler is cutting to the strong side over Nick Collison, who will shortly dive to the basket. Derek Fisher is cutting to the weak side around Steven Adams, and looking for an open three. At this point, Butler clearly has room for a shot, but he clearly intends to screen Reggie. The only problem with that is that there's already way too much traffic in the center of the court, leaving little options for Reggie once he gets the pick. 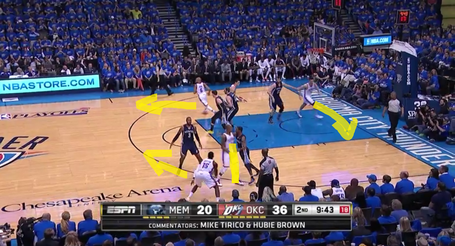 As you can see, the play is going nowhere fast. James Johnson successfully anticipated the screen, and Collison didn't succeed in getting much separation for Fisher. 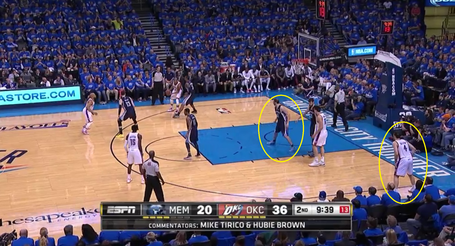 BUT IT GETS WORSE. Jackson ended up handing it to Fisher, who gave the ball to Butler on the wing. Now, we have Caron Butler attempting to isolate James Johnson, one of the most athletic players in the entire NBA. Meanwhile, Kosta Koufos completely ignores Nick Collison in the corner. Up until this year's playoffs, Collison had hit six threes in his career and was averaging 13% for his career. So yeah, I can't really blame Koufos for where he stood. 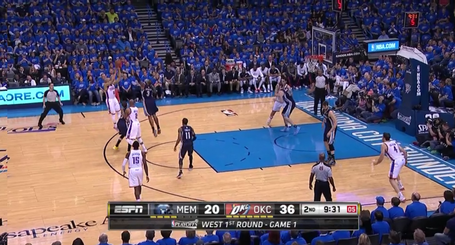 And...here's what ends up happening. Caron Butler sets a basic screen for Derek Fisher, who fires up a deep two with his foot on the line. He's also nearly blocked by James Johnson, who again anticipated Caron Butler's obvious screen. Worse still, Collison is sitting out on the perimeter, not helping out with floor spacing and not helping out with rebounding.

My purpose here isn't to lambaste Fisher and Butler for their poor performances, nor is it another column desperately hoping that Brooks will pull the plug on either of them. Ultimately, I'm a fan and want to see my team succeed, and I feel like the team as it's currently constructed has a legitimate shot at the title.

On the coach's end, I'd like to see more weak-side action from Butler and Fisher. Both of them are primarily shooters, so turn them into shooting threats and not ball threats. Furthermore, make more of an effort to get these guys where they operate best. Caron Butler's best performances in recent years have NOT come with him putting the ball on the floor, so why do we keep isolating him on the baseline? Why not put him in more perimeter situations where he can actually get the first step on his defender, and get to the hole? Mainly, that comes when he's matched up against power forwards, so I'd really like to see us use him more while running smaller lineups.

Concerning Derek Fisher, I'd just like to see the man move to the corner. Really, D-Fish doesn't have very many plays designed for him, and a lot of his shots come in transition or haphazard situations. He's a small creature in a big pond, taking any possible error that the defense can give him. But I feel like sometimes he just jacks up shots for the heck of it. While I admire his confidence, I wish he'd reel it in a bit and go to where he hits shots the best.

What do you think of the performance of Butler and Fisher? Is it fixable? Let us know in the comments!