The Thunder made things more difficult than they needed to be in the 1st half, but they spun that narrative into an inspiring comeback win instead. Up next, the Western Conference Finals.

Share All sharing options for: Game 6 recap: Thunder start slow, accelerate past the Clippers to win 104-98

The Thunder came into game 6 with the possibility of ending the series tonight, and in the end, the Oklahoma City Thunder did just that against the Los Angeles Clippers as they prevailed to win 104-98 at Staples Center, punching their ticket for the third round and the Western Conference Finals where the Spurs await. Kevin Durant led the Thunder with 39 points and 16 boards, while the Clippers saw 25 from Chris Paul. As uneven as the point totals look between each team's leading scorer, it wasn't an easy win for the Thunder. In fact, they made it an uphill battle for themselves by falling behind early.

Surprisingly, the first quarter could've been much, much worse. While Kevin Durant and Russell Westbrook combined to shoot 1-for-11 and the team turned it over six times in the first quarter, the Thunder managed to scrape together 16 points on the back of 11 points from Steven Adams and Thabo Sefolosha. Kendrick Perkins picked up two early fouls and sent Adams into the game quickly, and the rookie did a good job of being active around the rim to create baskets for himself.

But yeah, it doesn't need to be said that it's a bad sign when the Thunder are relying on Adams and Sefolosha to bail them out. For the Clippers, it didn't take long for Blake Griffin's reign of terror to resume. The ball was running through his hands early, whether it was out of the pick-and-roll, in the post or on the fast break. He scored or assisted on many of his team's early baskets, and that was one of the driving forces as the Clippers roared their way to 30 first quarter points. It's no fun to imagine how much worse it could've been if Adams and Sefolosha didn't show up.

For whatever reason, Scott Brooks decided to go a considerable chunk of the second quarter with Durant and Westbrook on the bench. Granted, both had two fouls, but down double digits in a potential clinching game doesn't seem like a great time to be sitting out both of your stars. This too could've been worse, but the Thunder's role players were again able to cover Brooks' butt and prevent the Clippers from extending their lead. Derek Fisher made a few jumpers and the second unit plus Ibaka did a fine job of playing defense. 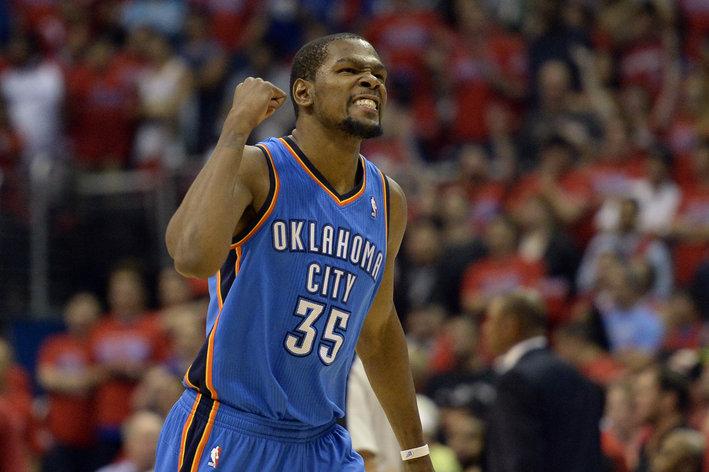 Nothing ever comes easy for the Oklahoma City Thunder, and we're beginning to think that's exactly how they like it.

When Durant finally checked back in, he quickly got things together and had his personal 9-0 run where he made three three-pointers. The Clippers quickly realized that they should stop giving him open looks and answered with their own 9-0 run, and then there was one more 6-0 run for the Thunder before halftime. A game of runs for sure, and the result at half was a 50-42 lead for the Clippers – following the general theme of the game up to this point, it could've been worse. Westbrook still didn't have a field goal through two quarters, having gone 0-for-4 from the field (all attempts in the first quarter) and 2-for-2 from the line for 2 points. Weird Oklahoma City Thunder basketball, man.

There was more Kevin Durant in the third quarter, as he scored 10 of the Thunder's first 12 points. The Clippers were able to keep up with Durant's scoring on a more balanced effort from their team, but the Thunder chipped away at the lead nonetheless. Westbrook finally registered his first field goal of the game with 3:47 remaining, and he and Durant combined for 24 of the Thunder's 30 third quarter points. With the quarter winding down and the Thunder down 3, Nick Collison drilled a corner three to tie the game (simultaneously fulfilling my life). In this quarter, the Thunder shot 71.4% while holding the Clippers to 22 points on 34.5% shooting – the Clippers were able to keep up in large part due to the extra possessions afforded to them by the Thunder through turnovers and offensive rebounds allowed.

It was a new game heading into the fourth quarter, and the Thunder had finally woken up from their early-game struggles. Serge Ibaka had left in the third quarter with a left calf injury, but for this game, Durant and Westbrook finally looked like they were ready to carry their team to the series-clinching win that they wanted from tip-off.

They did just that, combining for 21 of the Thunder's 32 fourth quarter points. The two teams remained in a clinch and swapped baskets for a few minutes, but Durant and Westbrook quickly powered the Thunder past the Clippers. The score was tied 80-80 with 7:50 remaining, but in exactly two minutes, the Thunder went on a 10-0 run powered by 7 points from KD and Russ to go up 90-80 with 6:00 remaining.

Griffin and Paul did what they could to stop the onslaught, but there was too much acceleration behind the Thunder as they continued to ramp up their play. Griffin fouled out with 2:27 remaining, and the free throws resulting from that foul sent the Thunder up to a 97-86 lead. Hectic late-game drama like what happened in the last two games threatened to become a thing again as the Clippers managed to scrap their way within 4 points with 49 seconds remaining, but they couldn't get any closer than that. Their fouls to stop the clock sent the Thunder to a 104-98 win... and a third-round matchup against the San Antonio Spurs.

This was a weird win. The Thunder were bad in the first quarter, swapped runs with the Clippers in the second, made their true comeback effort in the third, and claimed the lead in the fourth. After falling behind early, they gradually pieced themselves together and then accelerated past their opponents. Durant figured things out in the second quarter, Westbrook in the third. Adams was great from the get-go. Brooks re-discovered Collison and Reggie Jackson in the second half. The Thunder found the production they needed midway through the game, and what they found was plenty enough to power them somewhat comfortably through to the finish. As bad as the team started, they made an inspiring win out of an uphill battle.

Kevin Durant and Russell Westbrook both found themselves. It's that simple – with Ibaka leaving the game in the third, both of those guys were even more necessary to the comeback effort than they normally would have been. Some of the role players in this game was great, but the game's result falls solely on Durant and Westbrook's shoulders because they're the only ones capable of the heavy lifting. The 42 points that they combined for in the second half stood tall in comparison to their 16 point first half, and the second-half form they found was crucial to not only coming back but also edging ahead of the Clippers for the win.

Let's go all-in on this second half/first half contrast. In the first half, the Thunder's True Shooting Percentage was 5.6% below the Clippers' (46.1% - 51.7%). In the second half, their TS% was 32.2% higher (75.6% - 43.4%). That's an incredible swing, and while most of it was done on offense, you can see a pretty big decrease in the Clippers' offensive percentage from the first half to the second half. We've credited Durant and Westbrook plenty for their offense, but the team as a whole needs to praised for their work defensively. The Clippers only got to the line three times in the second half, while the Thunder had 25 free throw attempts! There was an incredible difference in the difference between the two team's offensive efficiency from one half to the next, if that makes sense.

Tonight we can celebrate because we've moved past the series with the Los Angeles Clippers. Going forward, we'll need to worry about the San Antonio Spurs. For one thing, they're the Spurs – the gold standard for what a sports organization should strive to be, even if the Thunder saw success against them in the regular season. For another, there's also the left calf injury that Ibaka suffered tonight. As far as I know, there hasn't been an update yet at the time of writing. Regardless of how good Adams and Collison can be, losing Ibaka would obviously be huge. He's the anchor to the Thunder defense and an important cog on offense. We'll update you when news comes in. For now, enjoy the Thunder getting out of the second round!

Next game: @ San Antonio Spurs for Game 1 of the Western Conference Finals on Monday, May 19 at 8:00 PM CDT