This game's Ways to Win analyzes 3 adjustments the Thunder should make to win Game 6.

Nor am I Scott Brooks.

But watching the Thunder play makes me qualified to propose some Ways to Win.

The Oklahoma City Thunder have taken the LA Clippers to Game 6 in California.  The Thunder are one game away from advancing to the Western Conference Finals where they would play Gregg Popovich and his ancient Spurs, who seem to never fade out despite their old average age.  (Put aside the dirty idea that if the Thunder had held onto their lead in Game 4, this series would be finished.)

We know the Thunder.  In one minute they could play like the Milwaukee Bucks and the next they could play like the '91 Bulls.  In Game 5, it was a mix of both.  Oklahoma City played 47 minutes of crap and 1 minute of perfection to steal Game 5 from the Clippers.  It was unlike anything I had ever seen.  Game 6 is a huge game.  If the Thunder win, they advance.  If the Clippers win, this series will be heading to Game 7 in OKC, a place where the Thunder are a shaky 4-3 in this post-season.

Here are the Thunder's keys to win game 6:

OKC has been known for being lazy on perimeter defense and slow close-outs on shooters.  Besides Thabo Sefolosha, the Thunder tend to make sloppy and slow contests to shots.  The Clippers as a team average the 3rd most makes per game in the NBA at 9.6, and they have multiple players players getting hot and making 2 to 3 per game, or even 8 *cough Chris Paul*.

J.J. Redick has been shooting 42 percent from behind the arc and has given the Thunder more than they can handle.  Chris Paul can hit over 3 three pointers in almost any game.  Even Jamal Crawford can kill OKC with his smooth shot.  In Game 1, the Thunder practically let the Clippers shoot away as they shot 51.7 percent from behind the arc.  In Game 5, the Clippers shot 44.4 percent.  Just like any other aspect of basketball, this can be stopped.  If the Thunder devise a plan to keep the Clippers' three point shooting to under 33 percent, winning shouldn't be such a difficult task. 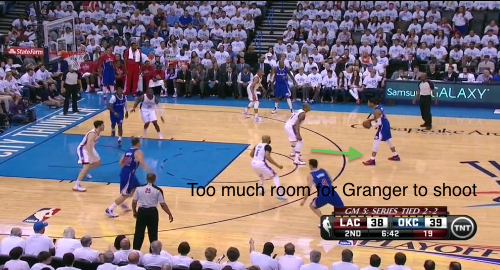 Wrong: Caron Butler gives Danny Granger, a respectable three point shooter, plenty of room to step into his shot and knock down the three.  Butler needs to know that Granger is not a dangerous threat to drive the ball so he doesn't need to provide that kind of cushion. Since Granger is not far off the line, he hits the shot because he was not contested.

When Kevin Durant utilizes his long physical attributes, he can successfully contest any shot.  Westbrook is fast enough to run out and heavily guard the shooter.  Nearly every Thunder player is capable of properly contesting a three point shot, it is just a matter of whether they have the desire and attention to do it.

Kevin Durant may be the MVP and the scoring champ, but he is not Superman (well, sometimes he is).  Throughout the series, the Clippers have double teamed and put a lot of pressure on Durant. While it does not rise to the level of what the Grizzlies did to KD, Clippers coach Doc Rivers did seem to figure a few things out that forced Durant into one of the worst shooting performances of his playoff career. In game 6, instead of trying to dribble through the defenders, he should pick his head up and open his eyes.  Think about it KD..."if there are 5 players on your team and 5 on the other, there are 2 players guarding you which leaves 3 defenders to guard 4 guys.  This means that at least one player is open."  It is like a word problem you would get in elementary school.

There are 10 apples in 5 pairs.  One apple moves over to make a group of three apples.  How many apples are left alone? 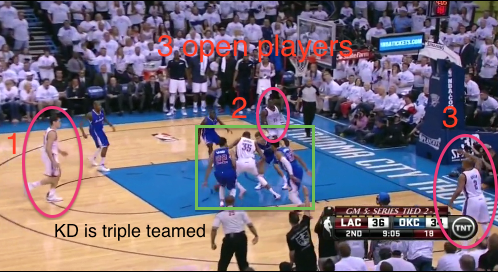 Wrong: KD is triple teamed.  He decides to put his head down and tried to dribble his way out of the situation, while 3 players are left without a defender.  The ball is stripped and goes the other way.

Correct: Kevin Durant is triple teamed.  He looks around and sees three open players, one of which is wide open on the three, Caron Butler.  He kicks it out to Butler who is a solid shooter and he knocks down the shot.

Sam Presti did a solid job of surrounding Durant with role players and rising stars.  If the Thunder work as a team, winning this game would not be as hard as it has been.

We have been waiting for this moment the whole season.

Steven Adams is playing a key role in this series and is doing what he does best, grabbing rebounds and getting under the opponent's skin.  Against the Grizzlies, Adams got Zach Randolph so angry that forced him into punching Adams in the face.  This led to Randolph's Game 7 suspension, which ultimately made Game 7 a cakewalk for the Thunder.  Just like last series, Steven Adams is back at it again and is now getting under Blake Griffin's skin.  Not only that, he is contributing offensively and getting better in his defense every game out. This is why I am proposing at least 25 minutes for Steven Adams in these upcoming games.  Adams is notorious for his toughness and plays hard, which does not necessarily make the Clippers happy.  This clip of Adams jumping on top of Chris Paul may have gotten him a technical foul, but still...wow.

Look at that smirk on the Kiwi's face.

Steven Adams has shown hustle that is unmatched in the playoffs.  He plays his hardest and is making a big contribution to the Thunder's pursuit of a championship.

Keeping Steven Adams in the game would be a burden on Blake Griffin and would bring a physical aspect to OKC.

Wrong: Scott Brooks plays Steven Adams for 15 minutes.  Adams scores, rebounds, blocks, and gets under the skin of the Clippers.  But he only plays 15 minutes.

If the Thunder make some simple adjustments, they should advance to the Western Conference Finals tonight.  It is just a matter of whether Scott Brooks makes the changes and whether the players execute.